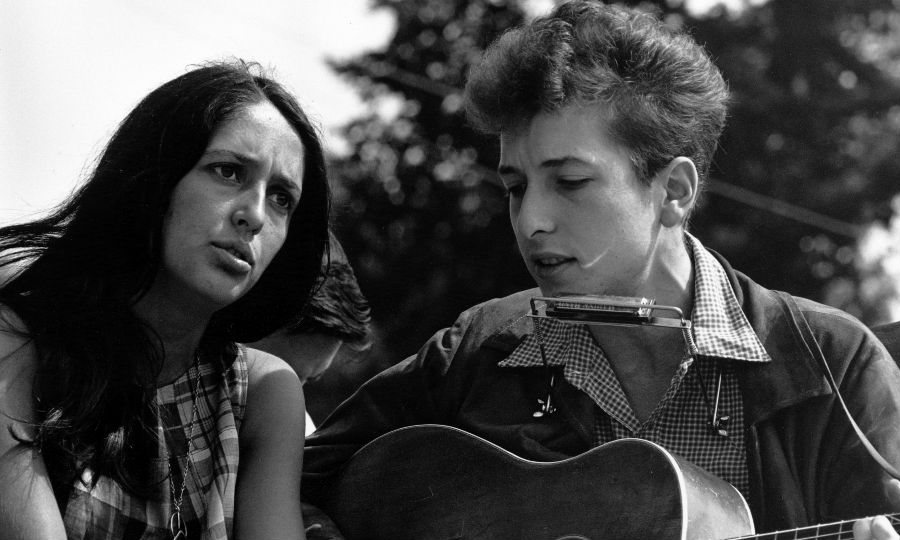 As a time of immense social, political and historic significance we have collated the 25 best ’60s songs for sticking it to the man.

A monumental decade of social and political upheaval, the 1960s saw the Civil Rights Movement, The Cuban Missile Crisis and the assassinations of both Martin Luther King and President JFK. As a time of such intense unrest, it also gave way to some of the best music ever written.

These are the best ’60s songs to stick it to the man. Neil Young & Crazy Horse – Down By The River

Famously written during a 39.5º fever, Neil Young penned the lyrics for Down By The River, Cinnamon Girl and Cowgirl In The Sand amidst hallucinations. However, nothing matches the grand heights of this 9-minute epic.

Crazy Horse is locked in, the guitars are howling, Young is yearning and the lead work is iconic.

Joan Baez  – We Shall Overcome

Over the years, Joan Baez became known for her essential take on the folk classic We Shall Overcome and it later became a key song of protest for the Civil Rights Movement.

Baez became renowned for her rendition of the tune after performing it at the 1963 March on Washington for Jobs and Freedom and it still gives us chills to this day as one of the best protest songs of the 60s.

The Stooges – I Wanna Be Your Dog

If you’re looking for the best 60s rock songs, this is the song for you. Fuzzed-out riffs and a clinking piano set the tone for Iggy Stooge‘s dark rupturing barks and sexual masochism. The classically trained John Cale handled production adding the single-note piano and sleigh bells.

Always one for pushing boundaries, Iggy turned the pop trope of puppy love into an exposing reflection of animal instinct and sexual humiliation, eventuating in one of the best all-time ’60s songs.

When Woodstock inevitably descended into madness and disarray before the first act even hit the stage Richie Havens had a weight on his shoulders. The road was blocked for miles and no other artists were yet to arrive at the festival.

After three encores Havens started improvising and the first thing that came to his head was Freedom, one of the most impassioned black rights songs of all time and the epitome of the counterculture movement.

A lot has changed in half a century, yet the need to defend ethnicity against derision continues, hence the challenging, exhilarating, and resonating opulence of James Brown‘s finest work.

Big Brother and the Holding Company – Piece Of My Heart

Janis Joplin‘s raw emotion tearing her soul in Piece Of My Heart is one of the most honest expressions of humanity ever recorded.

With Big Brother and the Holding Company riding the crest of the fuzz revolution, their live album, Cheap Thrills, is Joplin at her passionate best.

The Doors – The End

The final track from The Doors 1967 debut was easily one of the best 60s rock songs and the psychedelic overhaul the decade was scrambling towards and inevitably opened the flood gates to a diluvian downpour of fractals and kaleidoscopic sound.

The poetic acuity of Jim Morrison and the breathing, heaving flow of the band elevated The Doors to music royalty and hinted at their sonic schizophrenia to come.

The melancholy extravagance of Nico’s voice makes These Days more than just one of your casual coffeehouse ’60s songs. The later addition of the strings from Tom Wilson elevates the emotional intensity of Nico’s already serene voice to a potent token of 1960s remembrance.

Otis Redding – (Sittin’ On) The Dock Of The Bay

Recorded a mere 6 weeks before his death and released posthumously, (Sittin’ On) The Dock Of The Bay reflects on Redding’s life as a black man seeking opportunity and stardom in San Francisco then Georgia.

The solo was a lucky accident and Otis Redding had supposedly planned to finish the lyrics before his fateful plane crash in ’67.

Nancy Sinatra – These Boots Are Made For Walkin’

Written by Lee Hazelwood, These Boots Are Made For Walkin’ took pop to places it had only previously been fantasised about. Boots were hot in the ’60s with Dylan’s Boots Of Spanish Leather being one of his most highly acclaimed works.

Nonetheless, Nancy Sinatra‘s empowered sexuality and poised vocals made this one of the most undercover political ’60s songs.

Bob Dylan – The Times They Are A Changin’

The eternal recurrence of Bob Dylan‘s The Times They Are A Changin’ makes it, thematically, one of the strongest songs ever written.

Change is inevitable and it seems Dylan’s voice will ring as clear and true in 2964 as it did a thousand years before.

Famed for it’s extended live forms, Dazed and Confused is as experimental as Led Zeppelin gets. With Page bowing his guitar, Plant teeming with lust and Bonham being Bonham; it’s quintessential Zeppelin and a screaming, distorted classic in every sense.

It’s one of those rare songs that oppose war but empathises with troops and is a hallmark of Fogerty’s lyrical acuity. This is CCR at its absolute finest.

The Rolling Stones – Sympathy For The Devil

Swiping inspiration from Baudelaire, Mick Jagger‘s lyricism in Sympathy For The Devil is daring to say the least. It not only sympathises with satan but presents him as a well-spoken man of the world.

Perhaps even more daring is Keith Richards desire to put it all to samba but it all just works like butter on toast.

Joni Mitchell – The Fiddle and the Drum

Another anti-Vietnam protest to make the cut, The Fiddle and the Drum is from Joni Mitchell‘s sophomore 1969 album Clouds.

Written from an outsider’s perspective it delicately tandems themes of USA’s plentiful opportunity while demonising the country’s warmongering government.

Heroin was a landmark in its lyrical honesty and avant absurdism. Lou Reed was at his cliff-edged romantic best. Matching the manic all-time high of heroin, this hauntingly beautiful piece owes its uniqueness to Moe Tucker’s jiggling percussion and John Cale’s freakish viola.

Unlike its anti-Vietnam brethren of the decade, Everyday People is a plea for equality and an everlasting example of Jake Sly’s genius.

The eternal statement is just as relevant today as it was 60 years ago and Sly & Family Stone‘s performance at Woodstock was one of the defining moments of the decade, according to Carlos Santana.

The now iconic anti-war anthem is not the only song written in disgust of America’s involvement with Vietnam in the ’60s.

It’s not only a perfectly written and emotionally charged protest song but a testament to the power of musical objection. Sometimes all you need is a guitar and a voice.

Lesley Gore – You Don’t Own Me

Lesley Gore’s You Don’t Own Me became somewhat of a 60s feminist anthem and amazingly reached number two on the Billboard Hot 100 charts. You wouldn’t quite categorise it as one of the man hating songs or one of the most well-known 1960’s protest songs, its message was a protest in its own way.

Hilariously enough You Don’t Own Me was written by two men but that doesn’t take away from the message. Looks like the 60s just had a couple of allies and we absolutely stan a feminist king.

The Jimi Hendrix Experience – All Along The Watchtower

Shied by the deification of his hero, Jimi Hendrix put everything into his iteration of Dylan’s All Along The Watchtower. As a result it became a favourite on pirate radio stations in Vietnam, receiving heavy airplay and becoming a symbol of hope for the troops.

You can’t stick it to the man much more than that.

Perhaps the most haunting song of all time, the poem was written by Jewish writer Abel Meeropol and, upon its many iterations, became an urgent plea to stop the black lynchings in the South.

Buffalo Springfield – For What It’s Worth

Another resplendent jewel in the crown of protest music, Buffalo Springfield’s For What It’s Worth is up there with the most lyrically poignant songs ever penned.

A progenitor for Neil Young’s later success, Buffalo Springfield are just as iconic as this unquestionable masterpiece.

Somehow the people weren’t hearing the message so Aretha Franklin had to spell it out.

An epochal reflection of racial and gender discrimination, Aretha used her supernatural hit-making abilities to turn Otis Redding’s original into the undying feminist anthem that it is today.

Appearing like the Man In Back himself, Johnny Cash sounds powerful and larger than life at Folsom Prison. The crowd cheers replete with desperate honour.

As the song progresses Cash’s breath deepens as he seems a man as afraid of confinement as any of the inmates, marking the birth of the most famous live album of all time.

The Beatles – A Day In The Life

The archetypal expression of Lennon-McCartney dualism, A Day In The Life is The Beatles most succinct and impactful mosaic.

With John as a morbid philosopher and Paul playing the acidhead business man, this song essentially bridged pop and avant garde and is a zeitgeist moments of the ’60s.

Bob Dylan – Blowin’ In The Wind

Arguably the greatest protest song of all time, this is Bob Dylan at his most eloquent. With a knack for summarising hugely complex philosophical and political concepts into one succinct line, Bob Dylan hits the nail squarely on the head with Blowin’ In The Wind.

Dylan’s omnipotence and linguistic strength have loaded him with a barrage of ’60s songs that proudly stand the test of time and have deified the artist in the eyes of the world.