Kendrick Lamar will have his biography released in October this year via Atria Books.

Author Michael J Moore took on the project two years ago, naming the book The Butterfly Effect: How Kendrick Lamar Ignited the Soul of Black America. A new Kendrick Lamar biography, The Butterfly Effect, is set to be released on October 10.

Moore will be tackling a range of themes as he delves into Lamar’s surge to fame.  A heavy focus will be placed on his politically charged lyricism and subsequent rise as a vocaliser of systemic racial issues in the USA.

Moore spoke about his decision to write about Kendrick in this context in a 2018 interview. “Going from around 2014 until now, you have this surge of alternative Black creativity that he is at the center of in many ways. He helped usher this in.”

After almost two years, I can thankfully say this: “The Butterfly Effect: How Kendrick Lamar Ignited the Soul of Black America” is out 10/13 via @AtriaBooks.

Moore will also be exploring Lamar’s effects on hip-hop as a genre. His 2015 album, To Pimp a Butterfly, incorporated dense jazz elements and instrumentation. Contemporary jazz heavyweights Thundercat and Robert Glasper also got involved, helping create what will undoubtedly be one of the decade’s most defining records.

Keep an eye out for the official release of The Butterfly Effect on October 10, folks. Head over here for more info.

Engineering the Sound: Kendrick Lamar's 'To Pimp a Butterfly' Kendrick Lamar's clip for ELEMENT. hits harder than ever with homages to late photojournalist Gordon Parks 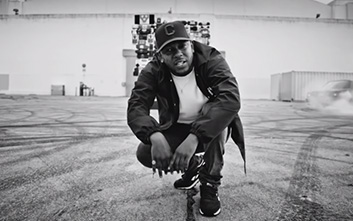