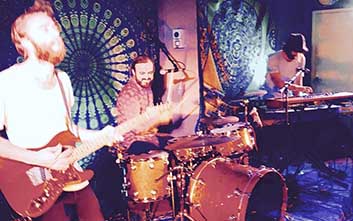 For all those people who believe it is just a vast no man’s land south of Sydney until the bustling metropolis of Melbourne emerges from the sun scorched land on the horizon, it’s time to reacquaint yourself with the map, and fast. In fact as Sydney has become demonised with it’s increasing restrictions, the further south you go the freer it gets. Specifically we’re looking at Jaspers Brush, a quaint little locality south of Berry in the City of Shoalhaven, a place that was the inspiration, formation and EP title for Dos Enos, a trio of self-described ruffians from the rugged south coast of New South Wales. With some woozy riffs reminiscent of past music legends, Dos Enos will have you sprawled out in their haze of smooth, bluesy psych.

The individuals have been banging skins (Joseph Winkler), tinkling the ivories (Luke Hannaford) and flirting with the six string (Matt Unwin) for some time but they can only count a handful of years under their belt as a cohesive unit. That being said their progression and sound is inspiring, seven months ago they released unto the interwebs a track called Nick Pratt and all the ingredients were there. A smooth, psychedelic number that was no doubt built from an extensive jam that contains the lyrics “Gotta get your groove on, go and get your groove on”, as if to remind the lost that’s why we listen to music in the first place.

It’s hard to avoid the comparisons to bands like Fleetwood Mac, The Rolling Stones in their ‘headier’ days and as soon as you combine psychedelia and piano, memories of The Doors won’t be far off. When their latest single Desert Wine hits your eardrums that influence is firmly in place but you can’t deny the musicianship.

The song is incredibly well structured but never feels restricted; it rolls and flows as if it was borne from a south coast river. The track itself is a fairly straightforward rock song with a psychedelic tinge but the addition of the keys allows this track to feel so smooth it’s like velvet being rubbed against your face, or a furry wall.

Dos Enos may have influences firmly rooted in what some may consider a golden era of music but they have managed to twist it in to an uplifting, spaced out sound for today’s ears. Just take one listen to Tijuana on their SoundCloud, it’s like an audio remedy for feeling sad, and if you need a reminder on how to simplify your life with a rainbow then check out the video for Desert Wine.

They may do it differently down the South Coast, but the cities should take note.