In case you didn’t already know, Roland hit a purple patch in the early ’80s. Their Juno series of analog polysynths and groundbreaking drum machines like the TR-808 all hit the streets within the first few years of the decade.

As any retro synth fan will tell you, these laudable instruments were based on analog architecture. But a digital revolution was sweeping through the world of music technology and Roland was in need of their own champion of the ones and zeros – the D-50 was their answer.

Roland enjoyed a hit parade of epic product releases in the early ’80s. When the digital train arrived, they got on board with their own influential model: the D-50.

The Heroes of the Ones and Zeroes

The early ’80s was a fruitful time in electronic instrument development – and not just for Roland. Since Bob Moog attached a keyboard to a synth a decade earlier, there had been a steady, if not explosive development in the market. With the Jupiter and Juno series, Roland went head-to-head with the likes of Sequential Circuits, Moog, ARP and KORG in a cross-Pacific battle for synth supremacy.

At the zenith of this race for innovation in analog synthesis, Yamaha blew the battle apart with the release of the DX7. Cheaper and with a voice count that their analog counterparts could only dream of, this digital powerhouse took the industry by storm. Musicians flocked and the mighty FM synth swept through the ’80s with an icy freshness.

The DX7’s impact surely must have taken the rest of the industry by surprise. The analog market all but dissolved in the mighty Yamaha’s wake and it took Roland – a company of substantial commercial resources –  a full four years to answer the challenge with the D-50. And while the wait was long, history tells us that it was no doubt worth it. So, the D-50 went head-to-head with the DX7 – but were they created equal? Even though they are in some ways very capable of covering similar sonic landscapes, with both generating sound from digital synth engines, their methods were very different. The DX7 used frequency modulation (FM) synthesis. Without getting too technical, this method involves the frequency of a waveform, known as the carrier is altered by the modulator.

The D-50 instead relied on a method of synthesis that Roland dubbed linear arithmetic. Basically, it involved the combination of recorded samples of a sound’s attack and synthetic digital tail. This was their ingenious solution for creating a sense of realism and other worldliness that found its way into many of the hits of the late ’80s and early ’90s.

The patches of the synth were created by two tones, upper and lower. These tones were themselves made up from partials. The partials could be compiled in one of seven possible arrangements – not dissimilar to the algorithmic structure of the DX7. This kind of sonic mixture was responsible for some of the most memorable percussion plus pad sounds of the new age genre. Think Enya, for example.

Adding to its immaculate ’80s pop and new age credentials, the synth was among the first to utilise quintessential ambient digital effects: reverb and chorus. Roland’s pedigree in the creation of rack mounted reverb units came in handy here, as the effects were not simply on and off affairs. The effects had multiple variations with editable parameters, which added an extra dimension of sound crafting possibilities for players.

As history would have it, the D-50’s moment at the top of the synth charts was relatively short-lived. In the same way that it pushed the DX7 into the background, it too was superseded by another giant from Japan: the KORG M1. It had an even broader scope of sonic possibilities, a deeper set of effects and eventually took the crown for the most popular synth of all time.

The sonic legacy of the D-50 is spelled out most prominently in its factory patches. Even the names of patches have lived long in the imaginations of the synth fans. You only have to utter names like Glass Voices, Fantasia or Digital Native Dance and you know exactly what you’re in for.

It’s blend of hard attack sounds – like pizzicato or staccato strings, vibraphones, marimbas, kalimbas and electric pianos worked unforgettably as a team alongside breathy woodwinds, icy choirs and fuzzed out digital guitar. These sounds were used in many a chart-topping hit in an era which unabashedly embraced the latest in cutting edge technology.

Like its analog ancestor, the JX-3P, the D-50 could be augmented with an external controller, the PG-1000. This device allowed users to have more of a “Juno” experience – with every parameter available at the push of a fader. While it was convenient for the keyboard, it was a godsend for the D-550 – the rack mounted version of the synth.

As can be expected, a Roland synth of this stature has been given the “Boutique” treatment – namely, the D-05. Being a recreation of a digital synth, the process of bringing it back to life was slightly different – no digital emulations of analog synthesis required. In fact, it reproduces the sounds of the original by using the very same PCM attack and loop samples. Roland explain:

“At the D-05’s core lies the first synthesizer with Digital Circuit Behavior (DCB) technology combined with the exact PCM attack and loop samples as the original D-50, precisely recreating every tonal nuance in stunning detail.”

As you can imagine, the performance capabilities have also been significantly upgraded, including a 64-step polyphonic sequencer. And of course, it’s still got that precious joystick! With the fetishisation that surrounds vintage analog, it’s easy to forget that the three biggest synths of the ’80s were digital. These synths, including the D-50, had an outsized impact on the music industry due to their affordability and unprecedented capability for creating new sounds.

This era has a lot to answer for in terms of influence – and accessing the sounds that made synths like the Roland D-50 so popular is easier than you might think. 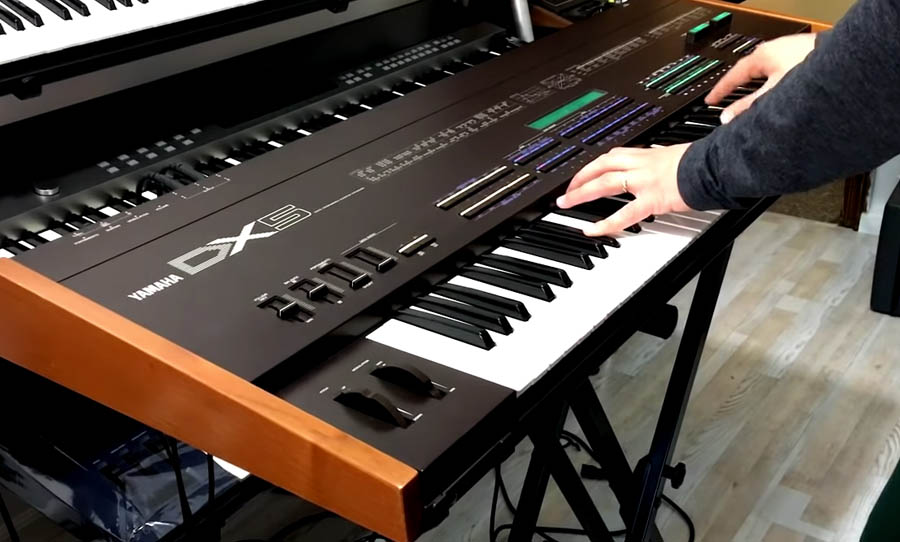 That's FM Alright: watch a demo video of the rare and magnificent Yamaha DX5 in action