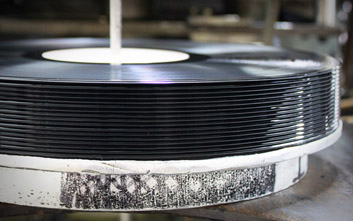 The demand for vinyl is at a high since the mid-90s and the medium is well on its way to becoming a billion dollar industry. But what about the manufacturing side of the industry? Is it still resting in the dark ages or is it making strides as quick as people are buying? Vinyl production technology is finally catching up to vinyl demand thanks to Canadian company Viryl Technologies and their new printing machines.

Actually, it’s a little bit of both. Currently many labels are suffering from huge order backlogs and often fans are forced to wait a little longer than expected before they can get their hands on pressings from their favourite artists.

This is due to decades-old manufacturing processes that can’t keep with the ever-rising demand for vinyl. Consequently, old manufacturing plants are re-opening and new ones are being started, but the core of the problem lies in the machinery that these plants use. However, a few companies are making strides to remedy this issue.

One of these companies is Viryl Technologies, which is currently in the process of implementing new vinyl pressing systems that will bring vinyl production into the 21st century. The machine system is called WarmTone and is far more reliable, and considerably quicker than current pressing machines.

In a nutshell, these WarmTone systems are safe, fast, fully automated, reliable, run by cloud-based software, and iOS-controlled – basically everything that old machines are not.

These $195,000 robotic machines are far more efficient with the ‘pucks’ that are used to press records, they also make it easier to switch out stampers (the negatives that press records) and feature a trimming/stacking system that can easily handle large-scale production.

They also sport modern sensors that measure elements like pressure, temperature and timing, reducing the risk of any time-consuming complications. Older pressing machines run at a massive 30-40% product loss due to everything from operator error to mechanical failure. These issues are not a problem with the WarmTone system, meaning that product yield is MUCH higher.

The machines will feature digital interfaces for greater control over parameters and better risk management. One machine is currently operating in the states with another set to be completed for Toronto’s Microforum last week.

Microforum plan to run six WarmTone machines at once, which would output 24,000 vinyl records per day, which is considerably more than any manufacturer would even dream of at the moment.

No more waiting 6 months for that new King Gizzard pressing it would seem.

Watch this awesome mini-doco on the machine here via Wired.