Few local bands can boast a first year akin to the one Middle Kids have just experienced. Without a single show to their name, the band dropped Edge Of Town last May, easily one of our favourite singles of 2016, not to mention a few friends we asked.

Fresh off a recent signing to EMI Music and in between rehearsals for their upcoming US tour, we caught up with Hannah, Tim and Harry to chat about their journey so far.

Echoing a wholesome nostalgia and a yearning for escape from the world, Middle Kids have captured the hearts of every audience they meet.

HAPPY: Hey thanks for coming! How are you?

HAPPY: Oh, Happy? Very nice. First things first congrats on the signing! Very high powered label, what was it like being approached by EMI?

HANNAH: Well it was great!

HAPPY: Aside from great?

HANNAH: It was cool cause we played our first show in July of last year, and they were at that show. From the very beginning they’ve been so encouraging and supportive of us, and we were amazed that they were even interested. We just felt so excited by what they were bringing and what they saw in us.

TIM: But Hannah had sold a song to them before.

HANNAH: Well that’s what’s crazy! I think it was five years ago that I did some work with Mark, who’s our A&R guy, and then didn’t see him again for a long time.

HAPPY: Was that why they were at your first show?

HANNAH: There were a couple of labels there, it was kind of a showcase. But they did know it was the new project.

HAPPY: And you’ve all played a bit before you were Middle Kids, how long has that been all up?

TIM: It’s probably been about two to three years since we started jamming as Hannah Joy. Through different sounds. Harry joined us about two years ago, but it was more eclectic, more keyboard based instead of guitar based.

HAPPY: Well you don’t seem, on first impression, like a band as fresh as the Middle Kids project. I saw you perform at the SMACS and you looked like a much more mature band.

TIM: You mean we look old?

HARRY: Tim worries about this often.

HAPPY: I’ve got grey hairs everywhere, my girlfriend plucks them out.

HANNAH: Well I try to but there’s no point.

HAPPY: There’s just too many.

HARRY: They take over.

HAPPY: Was it a bit of madness at the start pulling together a live set after releasing just one song and getting some interest?

HANNAH: It was actually an amazing thing because we’d made Edge Of Town long before we’d released it, and we’d made it and thought ‘ooh, this is really good!’ So then we started gathering songs and a set list from there anyway. It was a bit of a scramble but we had kind of been building to that point.

TIM: We did write a few songs once we were Middle Kids that were for the new sound we were going for.

HARRY: It was madness, to answer your question. It’s always madness.

HAPPY: You do have a shit load of American tour dates planned, so it’s nice to see the confidence coming through, cause that’s madness.

HANNAH: I’m afraid. Not super comfortable about that but it’ll be good.

HANNAH: But it will be a learning curve.

HAPPY: I’m most excited for you to play KEXP. That’s absolutely the best Youtube binge material there is. Are you just going to play the usual live set?

HANNAH: We haven’t really thought about that.

TIM: I don’t even know how many songs we’re playing.

HANNAH: Sometimes those sets are really short so it’ll be interesting to see what we have to do.

TIM: We’ll probably just be playing the songs off our EP, cause we’ll be promoting that. Wait, do you mean funny costumes or something like that?

HAPPY: Go for it. Would asking you to pick a favourite be a little too much?

HARRY: I really like Mac DeMarco’s one. Sounds really good and he’s got that hilarious vibe when you watch him. That’s one of my favourites.

HAPPY: So even though you had your other projects before, for me you represent the way a modern band can take off from one song, sort of like DJs were doing five years ago. Do you think more bands will start going for this ‘record first, play later’ strategy?

TIM: I think they’ve been doing that for years already. And I feel like you still don’t get anywhere without actual work. We’ve had a bit of attention but we still have to tour, we’re going on tour to meet the people, get some fans. I think electronic artists can get a lot of fans without touring but if you’re a band you still have to do the work.

HAPPY: There is a bit more, I guess, personality that has to come through with a band.

TIM: And electronic music seems to be more zeitgeist material at the moment, rock music is more niche.

HANNAH: Even in saying that, we know we are still very tiny. Sometimes people can have one song and get heaps of fans, but we’ve had one song and it’s done well with some people and we’re so stoked about it, but we’re not… rockin’ it.

HARRY: It’s funny the way people consume music now though. If I hear one song by an artist I think “oh cool, what else is there? Is there more?” Especially for rock bands. I feel like there’s this big, pregnant pause after releasing one song…

HAPPY: You want to do a Netflix binge instead of one episode. HAPPY: Well while Edge Of Town hasn’t gone global, it has picked up in Sydney a fair bit. You’ve had support from FBi, triple j, Volumes… The general dialogue around Sydney is that it’s a struggling scene that needs help somehow, but that attitude can be very unhelpful. As some people who’ve felt the full force of Sydney support, what do you think?

HANNAH: Do we think the scene is struggling? Yeah, probably.

HARRY: In general it’s not helpful to be negative without a solution though. For example we played this show for Volumes a few weekends ago, it was free, they put on 12 bands…

HANNAH: It was sick.

HARRY: It was so good to see so many people come out to see some live music. Using case studies like that to say “hey, let’s do this more” and offer a solution to what people perceive as a struggling scene, instead of just slandering it without anything to offer.

HANNAH: And it’s a good impetus for us to put on a good show. If we feel like it’s struggling then our role is to see what we can do about it. That feels like a healthy response, a positive response to help change that. 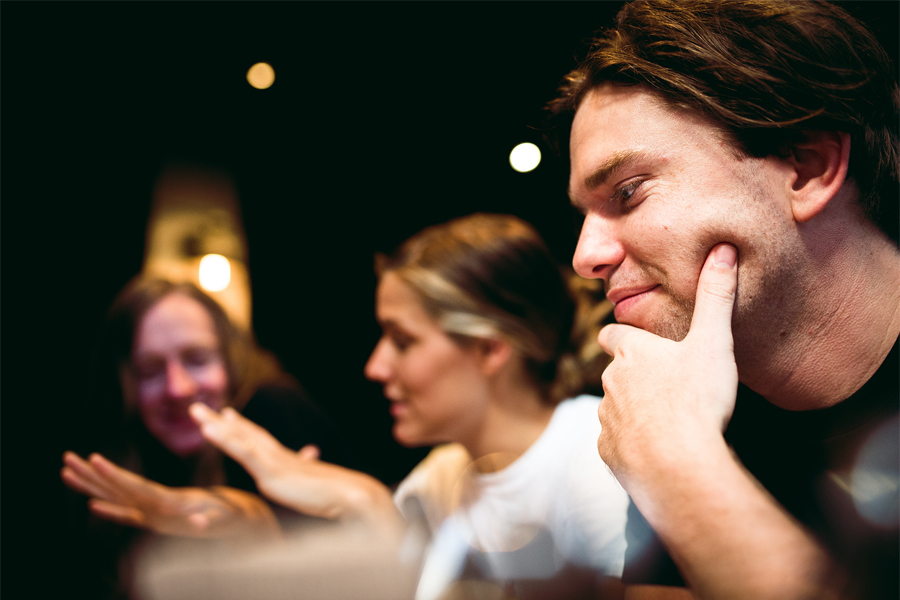 HAPPY: After the tour, after you’re completely consumed by that for a while, what’s next?

TIM: We’re hoping to record the album in April. We’ll be back here in April so we’re hoping to get straight back in. We’ve been recording demos the last few weeks, we’ve been doing a lot of writing.

HANNAH: Also our EP is coming out in four weeks.

HAPPY: And an album on top of that?

TIM: We want to have an album out later this year.

HAPPY: Going to be writing on tour then?

TIM: Well we have been writing a lot but I’m sure we’ll crank out the acoustic.

HAPPY: Basically there will be something ready for the hometown crowd when you’re back in April?

HAPPY: Awesome. We’re looking forward to it, whatever it is.

TIM: We’ll be a synth band.

Middle Kids’ self-titled debut EP is out February 17th. Catch them back in Australia this April: