Whether you’re at the club or at a festival, the person parked behind the decks is the undisputed master of the party. Unfortunately there are just some people out there who don’t understand this. There are some behaviours that shouldn’t be tolerated at gigs, but there are a few taboos when it comes to dealing with a DJ as well. So next time you see someone spinning the 1’s and 2’s, be sure to NOT to do any of the following.

Don’t be that dickhead who shows up to a club and annoys the beat maker okay? If you’re not sure how, have a read of our guide on How Not to Piss off a DJ. You know what’s really good at taking requests? A jukebox. The most obnoxious thing you could say to a DJ. Seriously, fuck you. If you can’t dance here then take a Zumba class. 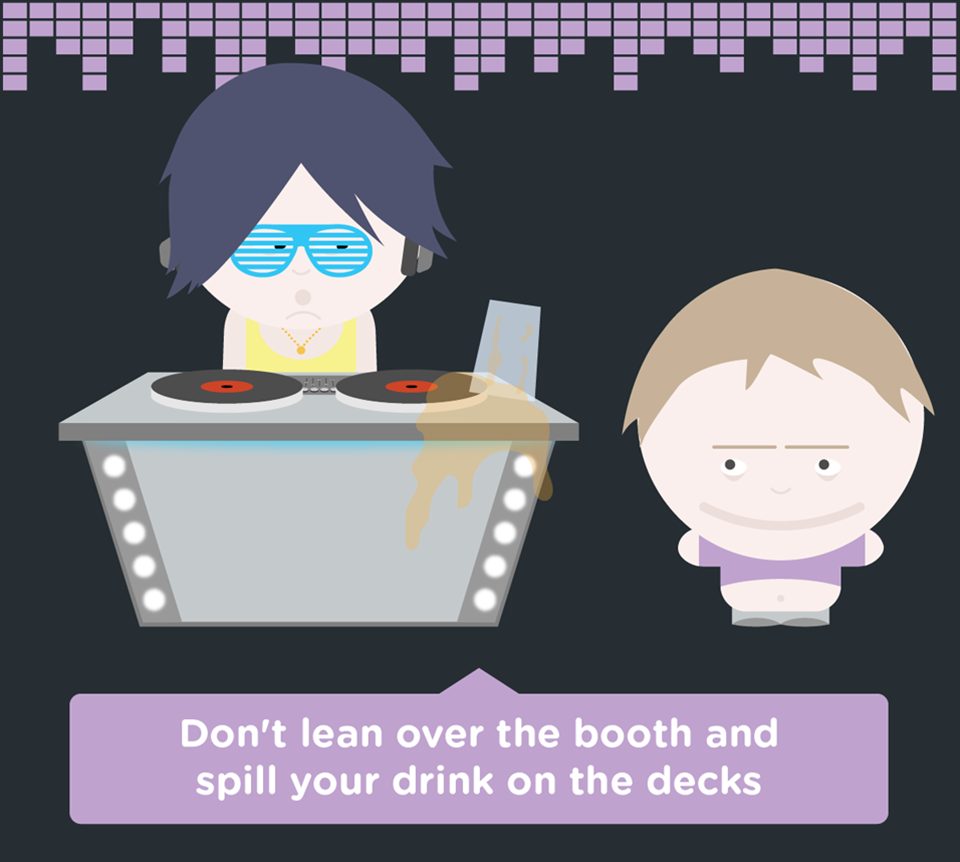 The 1’s and 2’s aren’t an iPhone. It will take more than a bowl of hot rice to to mop up your mess up. Again with the requests. A DJ is the same thing as a hack magician at your birthday party yeah? For their next trick, they’ll have security make you disappear. This is a DJ’s work space, because in case you haven’t noticed, they’re working. The last thing anyone needs is some dickhead hovering behind them like one of those birds that eats ticks off a wildebeest. “The one’s I’m about to play. Now get out of my booth and take your jacket with you without spilling your beer… never mind”. It’s the same reason why they don’t play music in the coat room. Does this need an explanation? In much the same way you wouldn’t walk on stage and start playing with a guitar while a guitarist is playing it. Go to the bathroom. Go outside to have a smoke. Take up smoking if you have to. Be that dork who takes ear plugs with you. Do ANYTHING but ask this question. At some point in your life you’ve probably thought “I wana learn how to DJ”. An admirable dream, but at some point you also thought “I wana be an astronaut”, but that wouldn’t mean you should tap on the shoulders of the guys at NASA for some quick tips on rocket science.