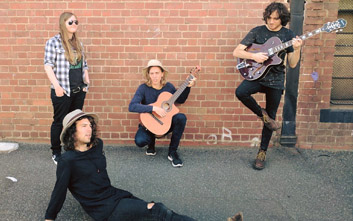 Pretty City and Fierce Mild have a lot in common. They’re both part of the Aussie psych rock pantheon, they both make ripper tunes and soon, they’ll join hands for a double single launch at Northcote Social Club in Melbourne.

Before they smash out the launch party together, we hooked the bands up for a two-way interview. Time to see what these legends really think of each other. Before your face melts at the Pretty City/Fierce Mild double single launch, catch each act getting a piece of the other in this band-on-band interview.

FM: The obvious stuff. Why are you here? What is this single? Were there any observations, moments or artistic influences that sparked the creative process for it? This is three questions already. As a more successful band than us, do you have a method of making your questions to other bands more efficient so that you can spend more time making music?

PC: We are here, among other things, to talk about our new single called Don’t You Remember Me My Love which is deliberately lacking punctuation, owing to a fight I had with a stranger online the other day about how grammar isn’t important.

This song is very much inspired by Brian Jonestown Massacre, which we listened to on repeat during a recent drive to Adelaide. We listened to those tunes and just let the slacker, stoner vibes earworm their way into our brains. Notice my use of grammar? I think I owe that stranger an apology…

FM: If Pretty City were to be a work of science fiction what would it be, and why?

PC: I actually love sci-fi and have done more study on it than anyone who isn’t a virgin should rightly do. So I’d have to say that we would be a novel called Fledgling by the late, great, Octavia Butler. It is short: 230 pages, taught, engaging and a wonderfully insightful piece of literature. We are none of those things, but our songs usually last 2:30, so you see the symmetry.

FM: You had a successful time at SXSW and are quite popular with American college radio. Would you have performed Donald Trump’s inauguration had he asked you?

FM: On the topic of misogyny… What are your feelings on being male and in the music industry?

PC: I feel deeply vexed about being male in the music industry, and in general. I am biologically what I am and have no compulsion to change that, but I feel completely disgusted by how much crap female artists, musicians, and lots of women in general have to put up with.

I’ve always had lots of wonderful female family and friends, and still can’t get over the things they’ve had to overcome that I often haven’t. Liberation from the confines of hugely stifling prescribed gender roles for men and women is a universal prerogative and something I very much wish to see and want to work towards.

PC: I’m going to shamelessly plagiarise Fierce Mild’s questions because they were so awesome, so what are you launching, what inspired you, and do you think plagiarism is a legitimate form of artistic expression?

FM: We’re launching Solaris. It was written entirely as a response to a dream journal, paragraph by paragraph. We tried to recreate musically the way a dream makes little logical sense but the temporal feeling is easily understood at the time the dream occurs by the person having it.

The lyrics shift from past to present to future tense in a matter of a few words, continually playing with the idea of conscious and subconscious interaction and the tempos and instrumentation shift erratically but at carefully planned points, whilst still trying to maintain a natural flow.

The title borrows from the Russian science fiction film (based on a Polish-Soviet novel) where a planet is constantly invading the psyche of the characters.

So… in answer to your plagiarism question… I think it’s unavoidable to reference the past if you want to exist at all. It’s important though, if you’re going to take something, that it creates new meaning and relevance. Simply rehashing things is not cool.

You have to be sensitive in how you reference or appropriate; in that you have a responsibility to ensure it’s credited and to ensure you’re sensitive to others of it’s use and to be culturally sensitive to the use of symbology or traditional forms.

Of course, stealing other bands questions is just cheating and morally reprehensible.

PC: If Fierce Mild was a horror movie what would it be and why?

FM: At the moment I’d go with Under the Skin by Jonathan Glazer. I feel there’s a beauty that lures you into a false sense of calm and sedation, only to follow up with a deeply unsettling punch that forces you to confront what it means to be human.

The idea the humanity is itself just a veil is an interesting idea. We also don’t speak very much live and allow the content to be the catalyst for audience interaction. Much like the film, our sets are guided by audio and visual imagery that tell the tale rather than a straight, conventional audience relationship.

PC: Your sound is extremely immersive and explosive. What kinds of personal experiences are you drawing from in your music?

FM: The music and artwork of Fierce Mild plays heavily on the idea of awakening the sleeping, and separating from the constructed world around us. We really want to push people to engage with their darker and more chaotic nature. Not in a gloom and doom way, but to recognise there isn’t such a thing as an ‘ill’ thought and that you should be human enough to engage with a darker and deeper reasoning.

Mental illness is a huge influence on the work, particularly the lyrics. My mother was schizophrenic so there’s an intimacy I feel with that particular state. In many ways I feel the lyrics are a constant way to try and connect to a part of my brain that I can witness function autonomously. I feel that autonomous system of thought belongs to her and that’s the only way I can try to understand her and the reasoning she had with the things she did.

We try to connect the emotions conveyed in the lyrics via the use of particular aesthetics at given moments. We make the instrumental moments convey another intertwined story that picks up where the words have trailed off. That could involve the metamorphosis of a guitar line from a sweet, light and stately feel to a wailing wall of demon-filled, sweaty nightmare or the use of a reversed synth line to indicate a re-entering of a previous state of mind.

The live visuals (by artist Stephanie Peters) are made to connect the audience more to the story and also provide an alternative interpretation of what’s being said musically. A sort of dialogue where structure completely suspends and a feeling of synaesthesia and sensory overload engulfs everyone.

PC: What do you guys think of Australia Day? Should we move the date?

FM: I feel the more important question is how do we commemorate the day at all? There are so many fascinating stories from colonisation and post colonisation to do with brilliant aboriginal figures that no one knows about because our education system has completely blind-sided us.

Tullamarine airport is named after a Wurundjeri man (Tullamareena) who, in 1840, set fire to Melbourne Gaol and escaped.He was recaptured later but let off as he spoke no English. A small, but important victory. Why don’t we talk about this? Or Bennelong, the man who speared Arthur Phillip?

I don’t feel it’s my call as someone who is not aboriginal to decide how I feel about the 26th as a marker. I support changing it when the call comes from Indigenous people and don’t feel that old white men like Barnaby Joyce have any entitlement to a say on when the day should be held.

However, simply changing the date is not enough. If the day were more a memorial, where we exchanged stories about aboriginal cultures, colonisation and the atrocities that ensued, would it be ok to have it on the 26th and would that be an important marker?

Again, that’s not my answer to give. However, no proper conversation has ever been had and people just continue to self indulge in a public holiday. Until we have that conversation, we can’t ever hope to have an Australia Day (so called) that is remotely healing and inclusive.

PC: Does anyone in the band, including himself, ever get tired of Roly being the most handsome and nicest man ever?

This is Jake’s Dad.

I have never professed to my son being handsome. Nor will I. Ever.

Pretty City and Fierce Mild are playing the Northcote Social Club this Friday to launch their singles Don’t You Remember Me My Love and Solaris. Details here.

With a heavy emphasis on all things psychedelic and Ben Wright Smith and Ruby Jones filling the support slots, it won’t be a show you want to miss. Tickets are available here. Ahead of their Colorize tour, Pretty City chat to us about servo sandwiches, on-tour antics, and the delectable goodness of vinyl