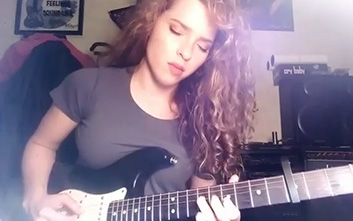 It’s no revelation that electrifying, badass women have existed in the music world for, well, as long as music and women have co-existed. It’s also no secret that famous female guitarists are few and far between when compared to male counterparts, and since Instagram’s debut and the #RiffWars uprise, the significant herd of men overcrowding the hashtag, and many others, has given this truth a little more depth.

But in amongst the stacks of 15 second riffs and licks being played by admittedly damn gifted males, are a ton of absolutely bangin’ females who play just as, if not, with more passion, intensity, and emotion – proving yet again how great our species of human is. Here are five of them we think everyone should have on their Instagram feed.

Have a passion for a wailing six string, bad ass chicks and filers that magically make everything photogenic? Then follow these 5 female guitarists.

Latvia’s own Antra Lante is the female guitarist of all our Instagram dreams, with over 2k followers her videos consist mostly of jazz soaked, blues imbued, rock n’ roll inflicted originals. With zestfulness, class, and evident flair, Antra has mastered the art of both her instrument, and the 15 second video. A little something everyone’s Insta feed would do with a slice of.

LA based Zeppelin connoisseur, and guitar slinger Angela Petrilli’s IG account features as expected, a ton of Zeppelin intros, riffs, and posters, amongst a stack of rock n’ roll, blues, and snippets of her band. With diversity, and impeccable technique we’re swept into a world full of guitar faces, and long dark hair. It’s the ultimate, enticing combination for the perfect guitar dedicated page. It’s almost impossible not to hit that follow button, then go for a mighty stalk.

Guitar, robes, and a stack of saxophone practically sums up multi-talented guitarist Lindy Day’s Instagram. The classic rock aficionado is the lead guitarist for the world’s first all-female Queen tribute band, so one can imagine the vigorous nature of the woman as she plays effortless solos and manages to astound in the mere 15 seconds she’s given. With lusty playing, and some humour thrown in for good measure, this is undeniably an account fit for a #QueenofGuitar

All the way over in Warwickshire, UK, Annahartguitar is one heck of a guitarist. With 100+ snippets of delicious rock n’ roll, blues, and everything in between, she is seemingly Gary Moore with a vagina. With fast movin’ fingers, smiles to boot, and a few random pug pics who wouldn’t want in on this spectacular account.

Wrote this the other day. I love stumbling across notes and chords that simply just hit home. One of the main reasons why I love playing guitar.

Guitargypsy7 is the inspiration behind this piece – she is a gem. With Stratocasters, and acoustics, her mostly low down, melodic blues compositions (both originals and covers) have been proving a treat amongst her 14k+ followers. With emotion, depth, and a Mayer-esque vibe, her lustrous strawberry blonde curls prove second best when faced with her guitar playing. An evidently gifted being who deserves a few more eyes and ears to bear witness to her powerful aura. #Guitargoddess

While you’re here, check out our list of the 9 most famous guitars in the world. Or check out our piece on self-taught guitarists here.