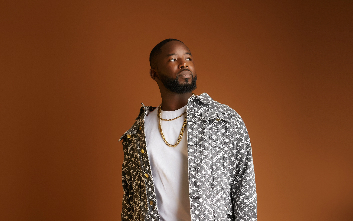 Fresh off a signing with Black Avenue Muzik, Canberra-based Osayo defied expectations on his newest track Me & You. Forgoing his RnB pedigree for something a little more worldly, the latest single is inspired by everything from afrobeat to dancehall.

Not to mention a recent trip to Ghana, which was tinged by a family tragedy. It’s been a tough time recently for Osayo, but he’s come out of the ashes guns blazing. We caught up to find out all about it. After dropping his latest single Me & You, Osayo has proved there are many more sides to him we still haven’t witnessed.

HAPPY: Hey Tey, how are you? What are you up to at the moment?

OSAYO: Hi there I am doin well, thank you very much. At the moment I am focused on living my best life and overall being happy.

HAPPY: Really dig your work on Me & You. How does this one differ to your previous tracks?

OSAYO: Thank you for your kind words and also for taking the time to listen to the music. Me & You is very special to me. If anyone who knows me and has heard my precious releases you will notice a whole jump in genre at the least… I recently visited Ghana due to unfortunate events in my life – my one and only brother passed away late last year in Turkey and a month later my grandmother did as well, which in turn led me to Ghana for the burial and ceremony.

I ended up getting signed to a label (Black Avenue Muzik). While I was there I took to opportunity of learning the language and how music was recorded and arranged and through that process came Me & You. Produced my friend and label mate Ronyturnmeup, the record came about in the late midnight to early morning. Some say that’s when you get your best ideas… I get most of my musical ideas in the shower.

HAPPY: Why was it important for you to sing in three languages?

OSAYO: I really wanted to throw myself in the deep end and immerse myself into the music and my culture, talking to my parents and meeting other artists helped me tap into it. It wouldn’t be the same if I sang all of it in English. The emotion and depth of the words don’t translate that well.

HAPPY: What’s the song about?

OSAYO: The song is about someone pleading with their beloved and begging them to stay because without them ultimately means death or dying. Saying “It’s always been Me & You, that’s how we are, thats how we will always be, despite the arguments, through thick and thin, I will not be me without you”.

HAPPY: The video is also pretty amazing. Who did you work with this time around?

OSAYO: Yes the video is very attractive and engaging thanks to the talented Prince Dovlo. He is a talented director based in Accra, Ghana. I first came up with the video concept of me being a photographer working with three beautiful models and one of those models was my lover but the others twi girls had no idea. And despite me having previous relations with the other two (being the Casanova that I am), I will ultimate come back to her. It was a fun filled day with laughter even though we had a few hiccups with location and time. Prince’s professionalism took over and we got the job done. The models were incredibly talented and professional as well as beautiful and I thank them for making my video and my ideas come to life.

HAPPY: Could you run us through your usual recording process? Where does a song start? Do you work with a producer?

OSAYO: My recording process is pretty easy. I usually like to freestyle over the instrumental, then we pick the best melodies and do the arrangements. Before doing all this I usually listen to what the instrumentals are trying to tell me or how it makes me feel. Once I catch that vibe then its all downhill from there.

On this record, the talented Ronyturnmeup came out guns blazing and cooked up a beautiful, soulful yet groovy instrumental that made it effortless on my part. We had soooo much fun making the record that we sent it to our label CEO that morning waking him up to have a listen. I played it for my Uber driver as well and he couldn’t believe it was me. He was dancing while driving me home.

HAPPY: Last time we heard from you, it was Tey Orion. Can we ask what sparked the name change?

OSAYO: Yes the name change has been something that has been in the back of my mind. Tey is actually a nickname that I got when I was a teenager and Orion came about from my love of the cluster of stars Orion’s Belt, I wanted a name that related to me personally. I don’t know if it makes much sense to people but it made sense to me. I had never told many people my middle name before. Only my family especially my cousin Astrid in England know and call me by the name Osayo…

One evening a few days before I got signed, I had a phone call from her and my CEO heard her call me by that name and as soon as he heard it he wanted me to change my artist name to my real name. He said it rolled off the tongue easier. To be honest I was always a bit embarrassed by that name, but I guess embracing what you don’t like about yourself ultimately makes us stronger right?

HAPPY: Are there any more tunes you’re waiting to release? Tell us about some of them.

OSAYO: Yes I can’t wait to release more music and let the world see the new me… I have a lot of records with my man Ronyturnmeup and also with other international DJs and producers. Looking forward to working with some producers from the land down under as well. I initially set out to release one of the best RnB EPs ever but due to my new found love of afrobeat/dancehall music, my RnB fans will have to wait on that one. But who knows, if they ask for it I just may release it sooner than later.

OSAYO: Thank you for having me and giving me this platform to express my thoughts.