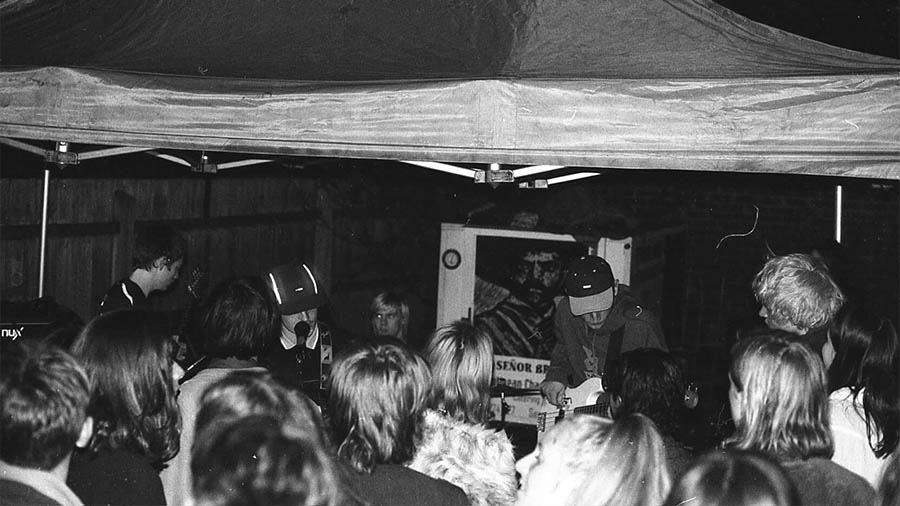 Hey there, my names Sean, I’m the label manager for Black Garage Records and I also produced Velvet Curtains And Seashell Toilet Seats for Fuzzrays.

The EP title actually refers to the decor at BGR, the walls adorned with velvet curtains and the small red velvet toilet cubicle resplendent with a clear resin toilet seat, which is home to a 3D undersea scene, complete with lobsters, small fish and seashells.

My first impression of Fuzzrays was of young guys who have the energy to rock, but also the maturity to hold a groove and pen incredibly introspective lyrics that belie their years.

That said, getting them to tell me about their songs’ origins was like pulling teeth, and their first response to me would have made for about three minutes’ reading. So after some constructive criticism, the suggestion that they become an instrumental band if they won’t share anything with the general public, then finally the threat of not promoting them at all if they don’t give me something, I was able to get a bit of insight into their debut EP.

Jack and Will share vocal/writing duties, and after a good bit of hassling, they gave me a rundown of how the tracks on their debut EP came about.

WILL: I wrote both Neon Leon and Kimmy Wong in the same week, both in my old bedroom, it was being renovated for the house to be sold. I had no lyrics for Neon Leon at the time and was just screaming the melody with ‘lah lahs’, which stuck and ended up becoming the basis for the chorus. It was year 11, I was 17, pretty thoughtless and dopey at the time and just trying to write catchy tunes.I brought the riff and melody straight to Jack and next practice we were playing it.

SEAN: Neon Leon became the opening song on their debut.

JACK: I’ve always daydreamed about robbing a bank and what it would be like or how I would do it, so I thought it would be a good source of material to turn into a song. We worked on this song as a band and we always knew it was going to be our opening song to our setlist cause it just fuckin’ pumped us up. It’s definitely one of our heavier sounding songs, inspired by bands like Gun Club, The Oh Sees and Velvet Underground.

JACK: The music was worked out by myself and Will and was probably one of the quickest songs we wrote. Will wrote the chord progression and I wrote the lead. We ended up playing each others’ parts and added our own little touches to it.

It’s more on the psych pop side of things, which opened the door for us to experiment with other sounds. The lyrics have a few personal references to do with some fuck ups I have done to some friends around our social circle, however I think the way I was writing was quite spiteful instead of remorseful.

WILL: Jack wrote AOI before the band started and we thought it would be a good song to start playing.

SEAN: I couldn’t get a lot out of them about the content, but I think the lyrics say it all:

A desperate lie won’t ease the tide,
I lie awake at night my brain was tied,
Swallow me while and seek the dark,
My freedom is left in the past in the past.

WILL: Kimmy Wong took a couple of goes to get the guys to play it, I just came up with a riff and melody, then didn’t know what I wanted to sing about, so I just made up some crappy lyrics about relationships, the sound was mainly inspired by Ty Segall and The Ruminaters.

SEAN: I personally think he came up with some great lyrics about crappy relationships!

Just a short instrumental titled after the leader of the cult Heaven’s Gate. I first noticed this guy from a Captain Murphy album/video, so I decided to look further into the story behind the cult and the recruitment videos. The weirdness of the dude just kind of inspired me to create a theme for him.

Fuzzrays debut EP Velvet Curtains And Seashell Toilet Seats is out now on Black Garage Records. You will hear a lot more from them as they write prolifically and (at the ripe old age of 18) have a lot left to give!

Catch Fuzzrays live at the Bendigo Hotel in Collingwood on Sunday October 21st – grab all the details here.