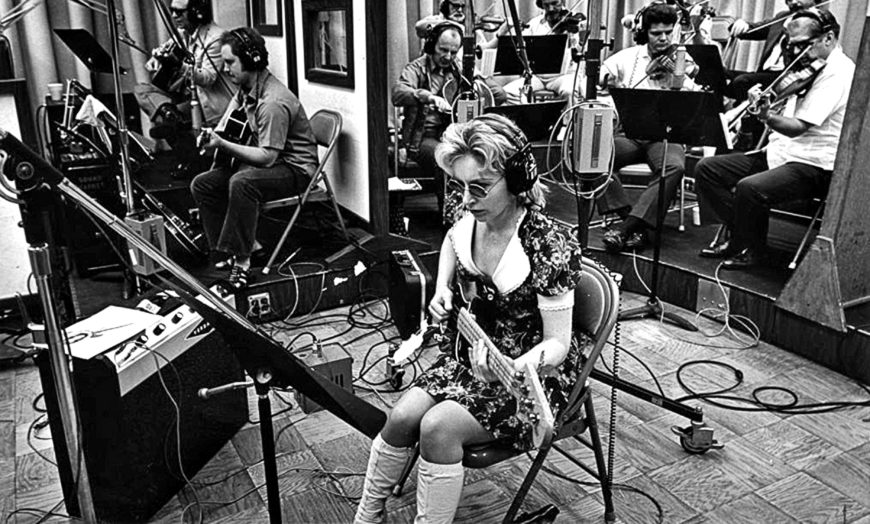 Have you ever listened to The Beach Boys, Frank Sinatra, Sonny & Cher or Simon & Garfunkel? Then chances are, you’ve heard Carol Kaye.

Meet the woman who Brian Wilson and Quincy Jones called “the greatest bassist in the world“. The woman with appearances on an estimated 10,000 recordings, who worked on some of the greatest albums of all time. Meet Carol Kaye: the greatest session player you’ve never heard of.

Carol Kaye has a career spanning more than half a century, and in her time, has guided rock music through some of its biggest turning points. Kaye — with her signature cat-eye sunglasses and peroxide blonde hair — invented, played and perfected a number of iconic basslines in rock ‘n’ roll, R ‘n’ B and pop songs from the 1960s to the 1990s. She influenced bands from The Beach Boys to The Beatles, and has featured in the background of so many records it’s hard to track just how far her DNA spreads into the songs we revere today.

So let’s take a look at the influence, legacy and sheer volume of work created by ‘First Lady of Bass’, Carol Kaye. From $10 guitars to Capitol Records

Carol Kaye (nee. Smith) begun her music career on a $10 steel-string guitar in 1940s Los Angeles. At age 13, she was teaching guitar lessons and playing gigs in various nightclubs around LA. Kaye made a name for herself in the LA bebop scene and in 1957, she was approached by Robert ‘Bumps’ Blackwell — an early associate of Ray Charles.

Blackwell recruited her to play a session with Sam Cooke on Summertime, though Kaye was hesitant to accept, it was this decision that launched her career. From there, she became a regular guitarist on all sorts of rock ‘n’ roll, R ‘n’ B and soul records, and worked closely with star producer, Phil Spector. One of her most iconic guitar sessions? She featured on Ritchie Valens La Bamba aged just 23.

These sessions brought her to Capitol Records, where a happy accident shifted her career into new territory. In 1963, when a bass player failed to show up for a session, Kaye volunteered for the role and completely fell in love with the instrument.

“I dug being on the bottom of the band. It was my own little spot. I knew what to do and what to invent” – Carol Kaye.

“A pick on flatwound strings.”

Carol Kaye’s genius did not lie in her charisma or a rockstar lifestyle, but in her inventiveness, her dependability, and her incredible skill. Her basslines became the harmonic and rhythmic backbone for some of the most important rock songs of all time.

She was used for much of The Beach Boys best work through the ’60s. Her work was so good, it was bumped up in the mix to be heard louder than most other instruments. Producers even started asking other bassists if they could recreate the ‘Carol Kaye sound’, which Kaye says is a balance of clean lines, perfect timing and hard picking.

Good Vibrations is the song that shows off the signature aspect of Kaye’s bass lines: her use of a pick. While bassists conventionally pluck with their fingers, Kaye had come from playing the guitar, so a pick felt most natural in her hand.

In fact, she perfected the sound of the Fender Precision bass by using a pick against flatwound strings. While she didn’t think the Precision bass was a great instrument, this method gave a uniquely sharp, crisp tone that no other bass was able to replicate.

“98% of things cut in Hollywood in the 60s were done with a pick on flatwound strings…there are bass players who rip people to death for playing with a pick. I say, hey, they don’t know the history” – Carol Kaye.

Carol Kaye had the unique gift to transform a basic song into something infinitely more interesting. By listening to the other musicians, she could find that hooky, memorable bassline that would end up driving a song forward.

There’s no better example of this then when she rescued the tune of Sonny and Cher’s The Beat Goes On. It was Kaye who invented that distinctive syncopated bassline that totally transformed the song into a hit.

This flair for devising comes from her history as a jazz musician, which requires invention and re-invention of notes on the spot. Kaye knew how to skilfully boil down years of jazz performance and innovation into the catchy notes of a pop hook.

Kaye believed she was generating fleeting pop hits when working on albums like Pet Sounds, completely unaware that her work would help inform a lasting touchstone in the music industry. In fact, when Paul McCartney gushes over the bassline on Pet Sounds that inspired Sgt. Pepper’s Lonely Hearts Club Band, he’s talking about Kaye’s contributions.

“To me, the bass sets the mood of the song. The bass player drives the band. I might have been slightly influenced by the drummer but I was really paying attention to the song and the singer” – Carol Kaye.

The Wrecking Crew or The Clique

Session drummer Hal Blain claims he, Kaye and their colleagues were known as ‘The Wrecking Crew‘. Blain coined the name after older studios expressed concern that this crew — in Levi’s, T-shirts and smoking cigarettes — would ‘wreck’ the music business with ‘faddish’ rock.

The Wrecking Crew was never one small, solid gang. It was an informal, unheralded lineup of talent about 60 people strong. They were the people you called to make a hit, and Kaye was the only female member.

Kaye had come from a jazz background, where women were not an anomaly. But rock ‘n’ roll had female players few and far between. Most women would only play until they got married. Kaye recalls: it was more important to have a ‘Mrs’ in front of your name than to have a career. The Wrecking Crew (2008) documentary, gives little but valuable insight into Kaye’s experience as the only woman in a white, male-dominated studio in the 1960s. She touches on insults she received that were skewed as compliments (I don’t think anyone ever felt that [Carol] was a woman-woman” — Hal Blain), mistreatment while she was pregnant and the lawsuit she filed against Tommy Tedesco in the ’80s.

In recent interviews, Carol Kaye has expressed interest in reclaiming The Wrecking Crew narrative, especially after the documentary was named after it to better align with Blain’s 1998 book of the same name. Kaye says she and the other studio musicians never approved of the nickname, and insists the group was most commonly referred to as ‘The Clique’.

The Clique saw its end in the early ’70s when the music world and the way music was recorded, shifted once more. Bands became self-contained and artists felt it was inauthentic to have outside talent record their music. Kaye felt the music she was being asked to make sounded “like cardboard“. What’s more, the Charles Manson killing spree has just been executed, and she and many of her Hollywood colleagues felt fearful for their lives and faded into the shadows.

Behind the scenes – studio to screen

For most of her early career, studio artists were not credited, so it’s hard to know just how much work Kaye did. At her most prolific, she was pulling three to four sessions a day while raising three kids on her own. Once her time in ‘The Clique’ came to an end, Kaye found herself working on TV soundtracks. You can hear her bass in the theme song of the Brady Bunch, Hawaii Five-0 and even in the original Mission Impossible.

When interviewed by Ernie Ball in 2020, Kaye revealed she doesn’t believe any of her performances are underrated. In fact, she recognises and proudly states that she is a commercial bassist and isn’t looking for any fame.

If anything, Kaye urges listeners to pay special attention to the sound of her electric bass in film soundtracks, especially those she produced with Quincy Jones. She says the bassline is beautiful, but most people “don’t even know it’s there”.

Where is Carol Kaye now?

Carol Kaye has steered her career into the realm of education. Since she left studio recording Kaye has self-published a number of books, including one titled How to Play the Electric Bass and an autobiography.

Kaye mostly stays active on her website where she uploads videos of her live performances, photos and links to informative music articles. Perhaps the most impressive aspect of the website is the one-on-one guitar lessons Kaye offers over Skype. The lessons are $75 and are available worldwide.

After a lifetime of being behind the scenes, Carol Kaye has made herself visible and accessible. Her lessons give you the opportunity to reach out and touch a part of music history.

The music industry has changed immensely since Kaye first picked up that electric bass. However, her legacy as an innovator, groundbreaker and inspiration for countless musicians has been sustained. Her work should be celebrated. While her name may not carry as much weight as some others in music history, her contribution to the music world is unquestionable.