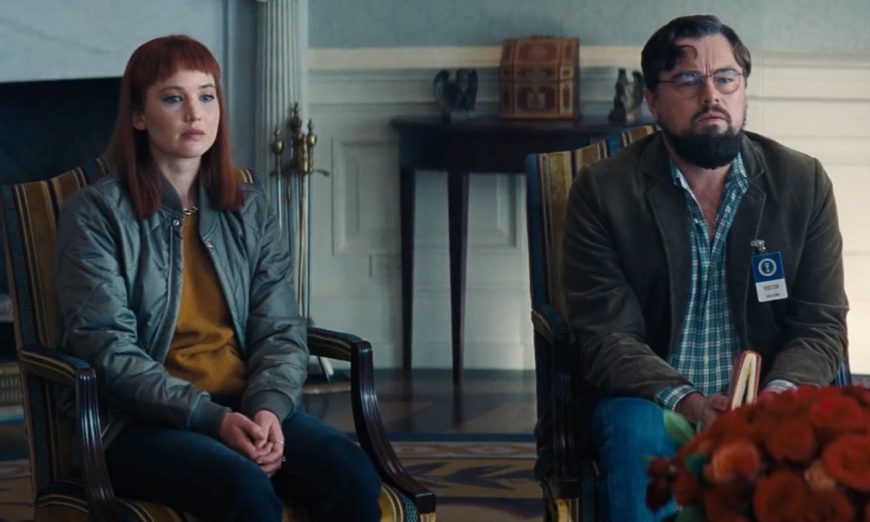 Jennifer Lawrence and Leonardo DiCaprio are amongst a star-studded line up featured in the trailer for the Netflix original Don’t Look Up.

The trailer for Netflix’s Don’t Look Up has dropped and it’s looking good already.

The movie see’s JLaw and Leo playing two low-level astronomers who try to warn the world about their discovery of a giant asteroid set to take out the Earth. Embarking on a media tour they struggle to find anyone listening, even the president, played by Meryl Streep.

“It’s not the most high-concept bizarre idea – the idea of a disaster movie in which people don’t necessarily believe that the disaster is coming,”  director and writer Adam McKay told The New York Times.

“It goes back to the trope of the mayor from Jaws: ‘Love to prove that, wouldn’t you? Get your name into the National Geographic?’”

McKay has a history of classic comedy movies. He directed, wrote and acted in Step Brothers, Talladega Nights, The Other Guys, and Anchorman among others, and is looking to add another strong title to the list.

It will have a run in cinemas from December 10th before landing on Netflix on December 24th.

The film was meant to be released last year by Netflix, but was delayed by the COVID pandemic. Shooting was also stopped when Jennifer Lawrence was hurt on the set, after a glass explosion hit her in the eye.

Lawrence also has just been confirmed to be expecting her first child with husband Cooke Maroney, according to EW.

We’re jumping for joy: Jennifer Lawrence is going to be a mom! ♥️https://t.co/BBr4OBG4bu pic.twitter.com/yEsGp7TK07