Old mates The Pretty Littles are a funny bunch. They boast a rare quality seen in the Melbourne garage scene: some good, old-fashioned silliness. It’s healthy for all involved.

They also put out some killer tunes. Their last LP Soft Rock For The Anxious showed huge musical evolution from the group; they’ve gone from young gun thrashers to a mature (well, maybe) group of professional musos. To celebrate, we got in touch with the lads to talk about some of the funniest, most somber, or downright shitty gigs they’ve pulled off. They’ve played some gigs and they certainly have some stories, now get a big laugh out of The Pretty Littles’ list of their five best live shows.

We were just beginning to hit our stride as a fully fledged rawk band after having put the acoustic guitars down. We landed a top support slot at Ding Dong Lounge with Sons of Rico (featuring members of Birds of Tokyo). This was huge for us, especially as Goolsa and Booza were die hard fans.

Birds were in town for the Grand Prix so there was a real possibility that the rest of the boys would be in the house. This made us collectively pretty nervous, and after some light persuasion from Goolsa we decided the best idea was to smoke a marijuana cigarette before taking the stage. Unfortunately none of us have ever been very good at smoking weed, except for Goolsa, and what proceeded to take place on stage could only be described as a train wreck, which Mr. Ian Kenny and the boys had the displeasure of seeing.

Don’t think we actually played one song correctly and, during one in particular, we forgot the chorus and got stuck in a loop of the verse until one by one we just stopped playing. The gig was over pretty soon after that.

Back in 2012 we’d booked a gig at The Great Britain Hotel in Richmond. Around the same time I considered the Joe Neptune/Custom Kings guys demigods – I’d go through their bins every couple of weeks to try and humanise them. Only ever McCain boxes if you were wondering.

We didn’t have any support act sorted for the gig so I think as a bit of a laugh we asked Joe Neptune if they’d do it. For reasons unknown, they said yes. In hindsight I’m pretty sure the reason was as simple as – we offered to pay them heaps. Shit that was a good gig. No memory of our actual set, but I can still vividly remember sitting in the band room, us and only a handful of mates, watching Joe Neptune do their thing.

I kept their setlist from that night in my guitar case for years. Ended up losing it somewhere along the way. In any case, there’s this snippet from Beat which proved the gig did happen:

We’d been a band for like 5 minutes when the bloke that taught me guitar (none other than the brilliant Jeff Burstin) mentioned that his little band were having their 40th anniversary at The Forum.

I said, “Hey Jeff, you got a support band for those shows?” and he said “why, you know someone?” and I said “Well Jeff, you wouldn’t believe it, but I’m in a band and we rule!”

I’ll never forget one of the boomers asking if we had myspace after the show. It was a harsh reality check going back to the Barley Corn. Earlier this year we had the opportunity to be a part of a fundraiser that our old friend Neil Gray had organised for his daughter, Star, who had been battling ill health the majority of her young life. Neil wanted to make sure that Star had a 21st before her illness became too overwhelming. To do that he called on some old friends to put on a big show at the Corner.

Both Little Red and The Vasco Era reformed for the night, which also included sets from Big Scary, Dan Sultan, and us opening the whole thing. The show sold out within a weekend. Beyond devastatingly, Star passed away two weeks before the show and the room was full of mourning, respect and live music.

Ted O’Neil said some extremely touching words in honour of Star and the Gray family, before Vasco launched into one of the most impassioned gigs we’ll ever see. It was a nice display of a community and friends coming together to help out where and how they could.

Jack (our almighty frontman/part time model) wrote a song based on a true story that happened to a friend of a friend. In short, some poor bastard had his wife stolen by his mate. He was at a bush doof to get back on the horse when out of no where a frisbee knocked out his four front teeth. Turns out some professional frisbee dude felt the need for a mid-pinga training session.

Anyway, a few grand later he had some fresh pearly whites and an excuse for a monumental shindig. 30-something-year-olds know how to celebrate the demise of a family!

We were invited to play at the divorce party. The room was filled with punching bags dressed in wedding frocks, more punch than a high-school dance and the happiest divorcee I’ve ever seen. The highlight of the night was when the bar man got stuck in the elevator for a few hours. Live in Melbourne? If you haven't been to the Corner Hotel yet, it's about bloody time 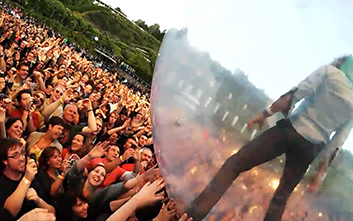