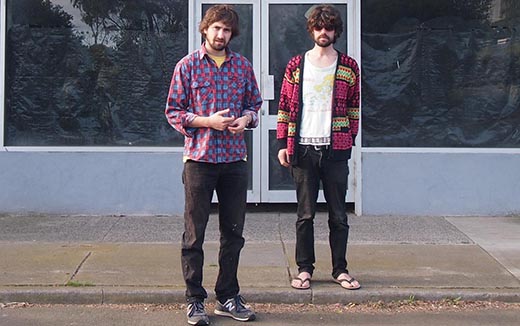 Yes, we know the grand finals are over. This isn’t that kind of footy. What we have here is the exclusive stream of the latest album from Melbourne electric piano duo Footy! Coming from the collective talents of Paddy Gordon and Lewis Mulvey, Footy’s new record, aptly titled Record, is set for an official release on October 31. Luckily for you guys your mates at Happy have connections and you can now enjoy all that piano goodness a few weeks early! Forget your fuzz rock. Piano is king, and it reigns supreme on the new Footy album Record. You can stream it now before it is officially released. Happy listening!

These days all the cool  kids are into producer heavy electronic pop or drowsy voiced shoegaze fuzz rock. While there are always great artists to be found amongst the piles of bands who associate with such genres, it is not everyday you come across a band who only use piano. Note, when we say piano we don’t mean synthesisers or the grossly underrated keytar. The guys from Footy make their art with good old fashioned ivory keys, and golly, it is refreshing to listen to.

Record only features a brisk seven tracks, but the introspective piano music seem to stretch out forever. Mind you this isn’t Beethoven, which many would think of when faced with piano music. The music crafted on Record is as introspective as it is innovative and imaginative.  When you hear the word piano you may think that the song would be a ballad. As their fans are already aware, Footy do a wonderful job breaking down your expectations and delivering a record that is surprising, becoming a rewarding experience to listen to the first time round as you try to pick where the song will go.

It is not completely a piano only affair, with some spoken word included on the fourth track The Price Is Right. One part humorous nostalgia trip into early 90’s game shows, the song also carries with it a sense of longing for a time that held such fond memories. The song transforms into raw lament, the bright keys giving way to a single, monotonous note undercut by the desperate vocals.

Slightly abstract and imaginative, Record is thought provoking and inspired in it’s songwriting. Listen to the album here on Happy now!