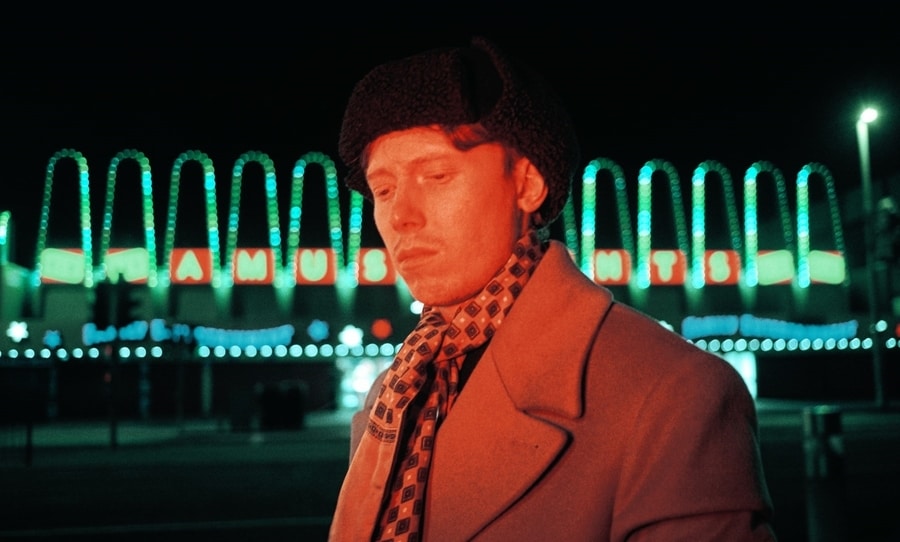 In a meandering, wistful space between night and day, internet-age poet King Krule reflects on life.

On his fourth album, Man Alive!, the singer traces a sludgy twilight through many-layered songs and surreal lyricism in an attempt to make meaning. On his fourth album, Man Alive!, King Krule trudges through a reverie of haunted images in a quest for meaning.

“Where are you going? / The day’s about to end,” King Krule muses on Energy Fleets. “Such a funny life I lead, I think about it all the time.” The wandering, maniacal track is the second last on the album. But by the time we reach this point, it feels like we’re somehow back at the beginning.

Man Alive! follows on from English singer Archy Marshall’s acclaimed 2017 album, The Ooz. Marshall is in a very different place to where he was back then. The 25-year-old has recently become a father. He’s also taking some time away from the city, splitting his life between Cheshire and South London. The changes sit well on him.

“I see a beauty in everything that I knew was always there, but I can understand it a lot more now,” he described in a recent interview with The Guardian. Whilst still retaining the insidious menace that has come to define his sound, Man Alive! is a clear departure from its predecessor. It’s more subdued, more of a reverie. The many-layered songs are imprecise, and combined with Marshall’s stream-of-conscious lyricism, the album builds a picture of something that is surreal and dreamlike. Or perhaps more fittingly – nightmarish and haunted. But somehow, full of hope.

“There’s a television, speaking to me,” sings King Krule on album opener, Cellular. “There’s a French girl / On my television / She’s crying in the palm of my hand.” Kaleidoscopic, whirring synths leak out beneath monotone vocals. A drum machine kicks with robotic precision, a saxophone oozes in the background. “What am I good for? (Am I good for?) / I’ve got no signal / Abandoned, to the voice in my head.” It’s a crisis of self in the midst of a crisis of world.

The surly, crawling Supermarché descends even deeper. “Let go,” King Krule shouts over and over. Indiscernible whispers only heighten this pastiche of incoherency. The bass is heavy, there’s a looseness about the guitars. It’s fraying at the edges, both sonically and philosophically.

The horror comes to life on the reverie-filled, Stoned Again. In a moment of stoned contemplation, he is transported back to childhood. There are fragments of suggestive imagery: “Ran all the way home / Right back to my mummy / Ain’t allowed in the park.” Through horror-film tropes, he makes confessions in a dread-filled high.

It isn’t until The Dream that a softness enters, King Krule almost begrudgingly revealing something personal: “I wasn’t sure at all why our love / Become so ruined with history.” Yet now that he’s opened up, he goes a little deeper.

Perfecto Miserable contains perhaps the simplest lyricism on the entire album, yet emerging from the sheer mass of words that has come before it, the sentences cut through with sudden precision. He repeats: “You’re my everything / You make me feel alright / You’re the only thing / That makes me feel alright.”

If the album traces the various stages of a high, we’re at the desperate point of the trip. A seemingly endless explosion of thoughts reaches a sudden halt. “I guess I have to go,” he decides. Soft, dulled guitars strum. Intimacy is delivered in many warping layers.

The laidback Alone, Omen 3, is punctuated by mesmerising rhythmic vocal delivery, the sense of groove provides nice variation. The song is a kind of anthem of in the face of existential crisis: “But don’t forget you’re not alone,” King Krule reassures.

In spite of all the menace, it’s moments like this that render the album hopeful. Underclass is romantic: “She was like / ‘Nothing ever made me feel the way you do'” and “I lay down on the empty streets / The roads seem to lead me to you.” Presumably, the “she” in these songs is his partner and child-mother, photographer Charlotte Patmore. Despite all the demons, the law of gravity must prevail: “Deep beneath it all / I had this feeling I was coming back,” he confesses.

On final song, Please Complete Thee, King Krule reflects, “Icarus still soars above the ground / …Everything just constantly letting me down / Girl, please complete me.” On the eve of fatherhood, Man Alive! manages to make romance from terror, forever longing to make peace with the darkness.

Man Alive! is out today on all streaming platforms. Grab your copy here.