Science Fiction, the debut long-player from The Belligerents, completely blew us away last month. A swirling spiral galaxy of futurist synth noise, disco beats, nu-psychedelia and glamorous pop, we’ve been spinning it since release day.

Sitting in the captain’s seat for this album was Lewis Stephenson, The Belligerent’s spacefaring songwriter and frontman. Before he beams Science Fiction all over Australia on the band’s headline tour, we caught up for a chat. 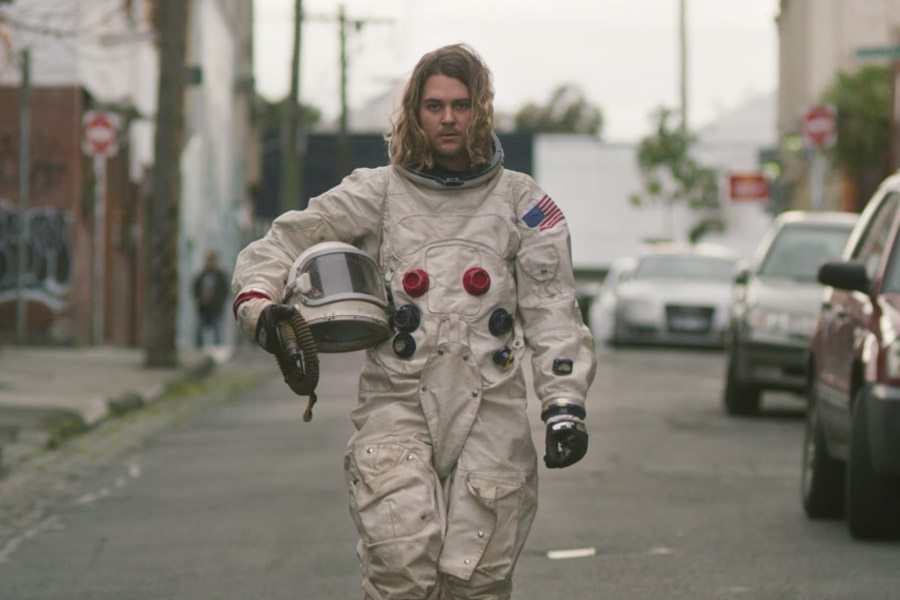 DIY songwriting, dogs with jobs and a newfound synth obsession: we explore the outer reaches of Science Fiction with Lewis Stephenson.

HAPPY: So Science Fiction, you took a bit of a DIY approach, you holed up in a farm for a couple of weeks and smashed it out.

HAPPY: I’ve heard mixed reactions to such endeavours in the past. Would you recommend it to another band, having done it yourself?

LEWIS: Yeah, I suppose we’re in a pretty good position to do it because Konsti is an engineer/producer for his day job, so we have access to a lot of gear and he knows what he’s doing. So when we were setting it up it was DIY, but we had good equipment. The space wasn’t treated, but Konsti kind of set it up so we’d get the best sound out of the room. It helped a lot, in terms of this record.

LEWIS: I probably wouldn’t go with an outside producer for Belligerents stuff down the track now, but I wouldn’t recommend against it either. Whatever suits, I guess!

HAPPY: What was the best part, or the worst if that comes to mind first, about living together for that long?

LEWIS: It’s not really a problem for us, we all get on really well. While we there for two weeks there wasn’t any arguing, there was a lot of separate recording, so two of us would be recording and the others would be at a beach or something like that. It was pretty easy!

HAPPY: Sounds like you’d do it again in a heartbeat.

HAPPY: The album itself, as far as I could tell the lyrics don’t really dive into science fiction… is it more of a metaphorical title?

LEWIS: I suppose so. I don’t know, I like the science fiction imagery but the songs aren’t really like that, it’s more about the sounds and the images.

HAPPY: Yeah! I was reading into a lot of songs that were really about people, or escapism, which I guess is a little sci-fi.

LEWIS: It’s not really about science fiction, I guess…

HAPPY: I do hear it though. I felt like you had a bit of a synth renaissance on the record.

LEWIS: I got my hands on a couple of little synths before most of the songs on the record, well the first batch of songs I had really written. I was experimenting with a lot of keyboard songs, things like that. I’ve built up a bit of an arsenal of keyboards now.

HAPPY: Awesome, which synths did you get on the record?

LEWIS: There’s a lot of Juno, a Roland Jupiter and a fair bit of a Moog Voyager we borrowed off some friends. I’d really like to get one of them, but they’re just too expensive…

HAPPY: Oh yeah, they’ll set you back. Being so synth heavy, do you think that was always something you were working towards or did it come as a result of getting your hands on this gear?

LEWIS: Yeah, it was probably a result of that. If I didn’t have them, the songs would be a lot more guitar-y.

HAPPY: Well that’s cool. I also heard a bunch of SFX-ish synth sounds. Was film, or TV, feeding into it at all?

LEWIS: Not a huge amount, there’s some drum machine stuff that’s making some odd, sound effect noise. Not so much film and TV stuff, maybe in terms of image but not so much the sounds that we were making. There’s a bunch of lasers…

HAPPY: That’s it! Sounded like a spaceship dogfight or something.

LEWIS: That’s where those sounds are.

HAPPY: Arpeggiators too I felt were used heaps.

HAPPY: Were you still composing most of that?

LEWIS: Yeah they were sequencers and stuff that I was just making on my laptop or a sequencer that I had, and then building songs around a drone or groove based around that sequence, or arpeggiator. And that’s probably how I wrote a large percentage of the album, writing around a rolling arpeggiator and moving the chords around it.

HAPPY: I kept coming back to that. Caroline, a shitload of them. It’s this swelling and dipping. I really dig it.

HAPPY: But then I had a listen to some of the older stuff and I could barely find it at all.

LEWIS: It’s something I started doing, and that definitely shaped the album, doing stuff like that. I’ve never really used them until about three years ago or so, and when I started I had this big collection of songs with a similar keyboard-y theme and they seemed to fit together pretty well.

HAPPY: Your keyboard player must love you.

LEWIS: Yeah, he’s definitely needed to expand his setup, his setup has become way too complicated now. It’s like three cases, everything’s connected and he’s running synths through the computer, stuff like that. It takes him way too long to set up, which is fun for him but…

LEWIS: Yeah, but he has fun doing it.

HAPPY: There’s more upbeat moments, there’s some really nice pop melodies… was getting the crowd involved by moving or singing along something you wanted?

LEWIS: It wasn’t really something I thought about probably until stuff was finished, like I wasn’t writing songs with that in mind, I was writing songs and thought ‘this could be a pretty good crowd moment’. But yeah, it wasn’t in mind.

HAPPY: The pop thing, more and more bands are embracing it even though they might not have originally been in the space. In Australia it’s like everyone likes pop but nobody wants to admit it.

LEWIS: Oh totally, I like my pop music. I’ll go for a cheesy melody, all the time. I love that stuff.

HAPPY: Was there anyone in mind for this record?

LEWIS: For this record, not really I guess. I just know that I like my pop. Hooks, melodies, I like people who do pop in interesting ways I guess, like Caribou or Toro y Moi, Ariel Pink or stuff like that. At the core they’re pop songs but you can really listen to them a couple of times.

HAPPY: Totally! One of our writers the other day said “Australians love pop music masquerading as something else”. I thought that was super bang on.

HAPPY: So the film clip for Flash, I need to know who’s dog that was. What’s its name? Tell me about it.

LEWIS: Yeah! So it’s a dog with an actual job.

HAPPY: That was not the answer I was expecting.

LEWIS: (laughs) He’s going to be in the next film clip, it’s coming out soon.

HAPPY: I was going to ask about it. It’s a very big ‘To Be Continued’.

LEWIS: Pretty soon. I’m really happy with the next one.

HAPPY: So your tour is coming up. How are you going, figuring out how to play all the songs on the record?

LEWIS: Yeah, pretty good! Surprisingly good, actually. We’ve learnt all the tracks now apart from one, and we’ve got a few days of rehearsal before the show. But everyone’s really excited to play them, we haven’t really added a new song into the set for the past year, so it’s going to be cool playing like five new ones at once.

LEWIS: It’s also going to be good having an album’s worth of material out, so people will know a majority of the set… if they’ve listened to the record. All the songs we’re playing will have been released, we’ve never done that before. Usually we’ll be playing like 45 minutes and there’s only four released songs in the set, which is a nice change.

HAPPY: The one song you haven’t nailed, is it a rehearsal time thing or more a technical limitation?

LEWIS: It’s got a really complicated guitar line which I’m having heaps of trouble playing and singing at the same time, so I’m practicing that at home. But I reckon it will come together, we’ll play it as long as I can play the guitar and sing it.

HAPPY: You played a couple of the new ones at BIGSOUND right? How did the crowds take it?

LEWIS: Really well, the only problem with that was the set got pushed back really late, like 3am so the whole crowd was pretty wrecked, pretty wasted. But yeah, the songs went down well. I don’t know how many people would’ve remembered it (laughs).

HAPPY: Sometimes that kind of crowd is great!

HAPPY: And you’re going to kick in the new year with Beyond the Valley, I wanted to ask if the big festivals take a special place in the band’s heart because of the way you started, with that Parklife slot which kind of catapulted you?

LEWIS: I suppose so, I like playing at the festival. Like the tour coming up has two different setlists, one show setlist and one festival setlist. The festival one is probably more for a festival crowd, the sets will be a bit shorter so we’ll cut out some slower ones. A bit more of a party.

LEWIS: Thanks a lot, man.

Catch The Belligerents on tour: PREMIERE: Enter the strange, euphoric darkness of Outside The Academy's Hand In Hand (Let's Go)