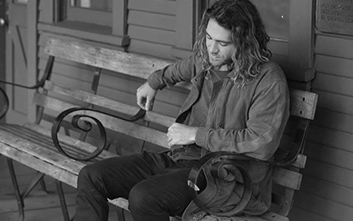 A balmy voice wends out of the spiraling current as Belly Side Up opens Telluric – Matt Corby’s terrific and deeply charged debut full-length. There is a silence here that has a song, given as much poignancy as the quiet grace and funk. Matt Corby may hail from Oyster Bay, but his old, old soul is borne from another terrain entirely. This album is like nothing else I have listened to in a long time. Matt Corby is a master of emotion on Telluric, with his music ebbing and flowing between surges of heartbreak and joy. But how will you feel when it is all said and done?

Each track feels like a stone on a path, leading you into all tones of blue. Watery invocations tremor and swim, deliver straight to the heart with their slow-lapping currents and lazy stretched sunset beats. There is a complexity and absurdness that feels like the songs of a man who has not only completely owned his mark on the music scene but an almost chilling feeling that this man has returned from some other place, where these songs wove out of, and he is changed.

While the album was recorded in coastal Berry, NSW, each song sounds as though it was shaped by some very different stones; Bobby Blue Bland, Buddy Guy, Taj Mahal, John Legend. And now there’s Corby armed with soul, funk, gospel, sad-psychedelia and blues, a sensitive young artist reaching back into the best of the past and deep down inside himself to surface his own offering.

His music has the ability to provoke feelings of desire as much as a sweetly stoked melancholy as well as something tranquil and soothing. Here the tide is out, low and the air is cool. Dusk crawls across the sky and his voice settles in for the night. Contemplative and emotional, eerie and stunningly beautiful, Corby’s ability to muster a host of emotions is staggering. Like the album name, his songs are electric, sweet signals, softly passed through the world, pulsing with life some deep-sea mystery raised.

The artist has spoken of seeing us all as Tellurians… we’re all just like the plants and the animals, we’re only humans. This idea reinforces what influences these songs and the very nature of his album and the Corby effect as a while. Humble and delicately veined with feeling and textured with it, resulting in music that doesn’t have to scream to be heard.

The appeal of it comes in waves, again and again, and upon, each listen, as the music curls and crashes softly about the listener, you find you hear new things, feel new things, hear that feeling and texture and just how deep it goes.

Telluric gives a nod to the greats of the genres he is exploring in his thoughtful and creative way, and frankly, only allows for Corby’s own star to rise further. There is nothing else quite like this happening. Corby is a curious creature and songwriter who is developing a rich catalogue to continue to build on. Unforgettable, addictive, heartbreaking as much as hopeful, an album to let wash over you, little by little… I urge you to wander out further from the shore. You will be transformed. PREMIERE: Suzanne Sheer – 'Down For You' Save the date: Fairgrounds Festival is returning to Berry in 2018! Soak up Yumi Zouma's Yoncalla, a mind blowing debut that beats all the odds