With their new single, Man You Want Me To Be, Australian indie-rock outfit Wharves have just dropped by far the most unnerving music video of the year to date.

There you are witnessing an intimate scene between two lovers when the Foals-esque guitar riff starts playing, bandages start coming off this poor guy’s face, and you’re pretty sure you know what’s going on.

As the bludgeoned face comes into view, more and more damage is exposed, and just as you are readying yourself to see a smooshed nose, boom! You get a nose tongue. Actress Laura Soerja Djanegara gives what I would consider a fairly muted reaction to the unveiling of a nose tongue, but maybe she was more ready for it than I was. 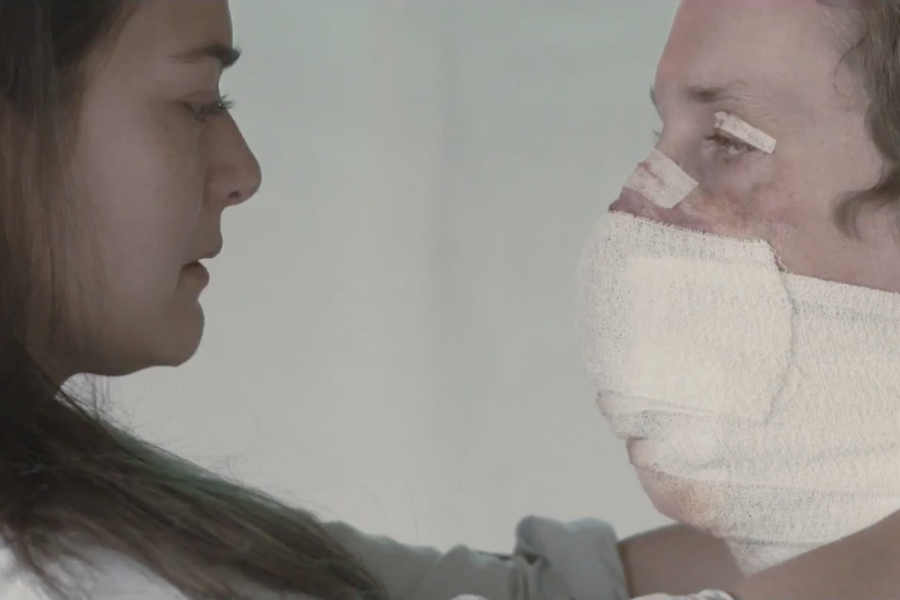 Uneasy and unbearably hypnotic all at once, what Wharves have crafted for Man You Want Me To Be is certainly something else.

The weirdness doesn’t end there however… as she carries on unravelling the bandages, more and more tongues are exposed, until the actor, Toby Blome, bares a striking resemblance to beloved Futurama character, Dr. Zoidberg.

The effect of this aesthetic in real-life is somewhat more horrifying than the cartoon version, and it becomes pretty easy to see why he can’t be the man she wants him to be.

Watching the tongues jiggle lightly at Laura’s touch has the same sort of captivating power as one of those feral pimple popping videos that will occasionally run rampant through your newsfeed; unbelievably cringe-inducing, but utterly spellbinding.

The coup de gras occurs when, having unveiled the mess that is Blome’s face, Laura, still feeling emotionally attached, leans in for a kiss. For a moment, it appears she will attempt to plant one on the mess of tongues that sit in place of Toby’s mouth.

She diverts to his forehead, leaving the viewer simultaneously relieved and with a sense of perverted disappointment. I, for one, am curious about the mechanical issues a mouth to mouth effort might have presented.

Further credits for this amazingly weird video go to director Benjamin Sheen, Leuke Marriott as director of photography, Alexi Creecy for the horrifically real prosthetics and Alex Sheen for the camera rotation.

Once you look past the weirdness of this film clip, you can actually appreciate that it was surprisingly powerful. Despite the ludicrous prosthesis on Blome’s face, there was nothing silly in the emotions bouncing back and forth between the two actors, and the end result is both deeply disturbing and oddly moving.