If you’ve been kicking around, listening and appreciating some great tunes in the last decade, there’s a hefty chance you’ll recognise the technicolour art of Ben Montero. Over the years he’s thrown together album and merch designs for POND, Kurt Vile, GUM and many, many others. Including, of course, his own band Montero.

Music aside, Montero’s sketchbook stands on it’s own. His series of charming, often cynical animal characters are all at once childlike, heartwarming, heartbreaking and devastatingly relatable. Not to mention, cute as everliving fuck. The world through his eyes is a colourful one indeed, and we’ve asked him all about it. Step out of reality and into the comfy, rainbow daydream of Ben Montero, where frogs listen to classic rock, and dream of greener pastures…

HAPPY: Hey Ben, what are you up to?

BEN: I’m currently in Woodstock having some chill time. It’s Fall here and it’s so pretty. I’m about to go fishing and then eat some cherry pie at the diner down the road.

HAPPY: What project are you working on at the moment?

BEN: I’m finishing an album cover for a band and a tour poster for someone else and catching up on mailouts at the post office. I have a ‘to do’ list somewhere but I lost it. I make 50 ‘to do’ lists a day and lose them all. Also working on a children’s book. BEN: I’m just here for a for a little while. It’s New York so it’s completely amazing and makes you feel like a tiny tadpole. Which is a good feeling. It’s loud and you can get pizza at 4am.

BEN: The one available at 4am. Prefereably with anchovies. HAPPY: How have the Montero shows been going?

BEN: Really good. Great response from people I like that I’ve met. I have some local guys playing and a friend from Greece and another from Australia. Think I’ll be playing here a lot more from next year.

HAPPY: What’s the NYC music scene like compared to Australia, or just Melbourne?

BEN: I’d say there are better bands in Melbourne but I haven’t been involving myself much in any music scenes anywhere recently.

HAPPY: Any plans to hike back to Australia in the future?

BEN: No. I’m living the life of a Travelling Wilbury and I wouldn’t change it for anything at this point in my life. Whenever I’ve been back recently I haven’t enjoyed it much either.

HAPPY: Are the blokes from POND as weird as I think?

HAPPY: Where did the idea for their cover come from?

BEN: Nicked it from Robert Crumb. HAPPY: The GUM posters are out of control as well. Is psych the genre you think best suits your style?

BEN: Not really. I just do whatever comes out and often I don’t know when to stop so it becomes out of control. I like non trippy drawings too.

HAPPY: You lived with Jay, right? What was your favourite thing to do for housemate dates?

BEN: Recording music in the lounge room while eating spaghetti and betting on the greyhounds. HAPPY: What are you listening to at the moment?

BEN: I listen to Reverberation Radio mixes on Mixcloud a lot. Also my favourite album, A Whole Lotta Rainbows. Chopin nocturnes, Dangerous by Michael Jackson because I’m reading the 33 1/3 book on it. The Avalanches’ album. The Lemon Twigs, Coltrane and whatever is around.

HAPPY: Where does the inspiration for your comics come from?

HAPPY: What’s the next kind of animal to be added to the sketchbook roster?

BEN: Good question! Don’t think I can juggle too many in my mind. Open to suggestions!

HAPPY: Well thanks man! Anything else you want to shoutout?

BEN: Live an interesting life and don’t go straight for the comfort zone. 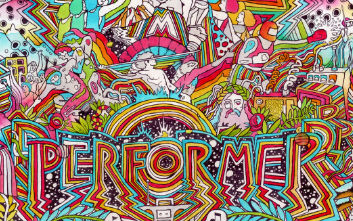