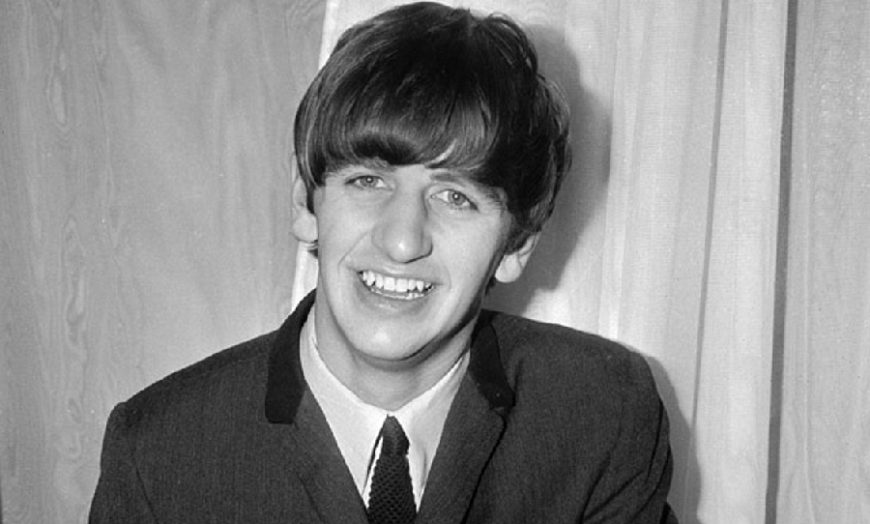 We all love Ringo Starr, so we have compiled a list of his top moments both in his career, life in the Beatles, songwriting, and his acting. Come together with us to celebrate a natural-born star.

From his washy hi-hats and iconic tom fills in Come Together to his low vocal tones in Yellow Submarine and With A Little Help From My Friends, to his acting in many films outside of Beatles films, and as the narrator of Thomas the Tank Engine, Ringo Starr really is a star. Ringo: the king of feel

As claimed by Dave Grohl in a tribute video for Ringo Starr’s Rock and Roll Hall of Fame Presentation:“Ringo was the king of feel”.

Ringo knew when to take a drum fill, when to move around the drum kit, when to open and close his hi-hats, and when to dig into his kick and snare a little harder. Being left-handed but still playing the drums in a right-handed setup, some speculate that this was a contribution to his secret sauce.

Let’s look into some of the top drumming moments in and outside of the Beatles.

Saw Her Standing There: A classy, refined performance

Originally released as a B-side to the single I Want To Hold Your Hand in December 1963 from the Beatles’ debut album, this classic shows off Ringo’s refined playing. Tight with his hi-hats and only opening them to make a more washy sound towards the end of the song, he is consistent throughout the track.

Starr really plays for the song in this recording, as everyone else seems busy and loose in their playing, Ringo drives the band. A close listen will make you realise that he only takes a drum fill around the melody –listen at 0:43 when the vocal finishes “I’d fall in love with her” for a well-timed fill to ‘fill’ to lead the band into the next section, whilst at 0:53 he lets the guitars take a moment and fill into the next section. A pure class performance, even on the band’s debut.

When I’m Sixty-Four: a side of Ringo you might not consider

Jumping a few years on and into the Beatles masterpiece Sgt. Pepper’s Lonely Hearts Club Band you hear Ringo Starr’s excellent drumming across all the eclectic and dense arrangements like Lucy In The Sky With Diamonds or A Day In The Life. But it’s When I’m Sixty Four that sticks out to show another side of Ringo we don’t often see.

Playing with brushes, he is the backbone of this recording, playing only when required and with technical precision. His brushes work is rarely heard and it’s shown straight away in this technical performance as he ‘stirs the soup’ – a drumming term thats refers to swiping the brush in a circular motion around the snare drum head.

It’s worth noting that across this album, Ringo’s drumming is exceptional, from his big tom fills in Lucy In The Sky With Diamonds to strong backbeats in the title track, Getting Better, and Lovely Rita.

In the book Paul McCartney: Many Years From Now written by Barry Miles, Ringo is claimed to have said his favourite performance is on the Beatles’ song Rain. Originally a B-side to Paperback Writer, you can tell why this is the drummer’s favourite.

The song starts with a strong snare fill, announcing the opening of the song. Although that’s not quite it for fills, as there are fills all over the track that would make Keith Moon jealous. They’re perfectly placed, both in the way Ringo uses them to highlight certain sections or moments, and in the way that they don’t get in the way of the vocal melody.

In some moments it’s almost as if he isn’t playing with the others in the band, seeming like he launches off in his own direction, but then he comes back into line with a solid backbeat. Pure Ringo; character and genius.

Concert for George: playing for his bandmate alongside friends

In the 2002 Concert for George – a concert event in remembrance of the anniversary of the passing of George Harrison – Ringo Starr takes the stage as a drummer for the entire show, as cool as he ever is, playing alongside his favourite drummer Jim Keltner.

Other drummers onstage are Eric Clapton’s drummer Henry Spinetti, and percussionists Ray Cooper, Emil Richards, and Jim Capaldi. It’s great to watch these masters of their instruments interpret Beatles songs alongside Ringo himself.

Starr does as he does the entire time on stage; relaxed, smiling, cool, and swinging that hi-hat hand left to right to get that washing sound he created. Ringo performs his own song at the concert, Photograph, that was co-written with George Harrison. It’s a reminder that he was all but ‘just a drummer’.

Ringo Starr’s songwriting and singing in the Beatles never tried to match the others in style or direction. He always did himself, easy going and laid back, taking the lead on the more light and uplifting tracks, even if he didn’t write them.

No airs or putting on a character, unless of course he was portraying a character in song with Yellow Submarine.

Whilst not written by Ringo Starr, Yellow Submarine may well be one of his famous songs as a singer. The Beatles always had a knack for getting music and emotion right, and in this song, the idea of Ringo taking the lead with his almost narrative-like singing is a perfect match.

The way he swings the melody is almost sea shanty like, which of course matches the song’s title. It’s also funny to note that on Abbey Road Ringo sings another song about the sea, Octopus’s Garden.

Winding all the way back to Fab Four’s debut, Please Please Me in 1963, we hear Ringo take the lead vocal on the upbeat Boys. The other ‘boys’ in the band support him with their ‘doo-wop’ backing vocals, while he sings lead and hammers away at his ride cymbal.

It shows early characteristics of a fun Ringo when at 1:03 he sings “all right George” — followed by a quick drum fill — that gives you an image of him sitting behind the drum kit. screaming into the mic whilst nodding to George Harrison to take us through a cycle or two of the chord progression.

It’s a great performance of a song originally released in 1961 by the girl group The Shirelles, keeping the album fun and upbeat, sitting at number five on the tracklist.

With a Little Help From My Friends

Maybe Starr’s second most notable song on lead vocals is With a Little Help From My Friends. Coming in as the second track on the experimental-for-the-time album, Sgt. Pepper’s Lonely Hearts Club Band, it’s a playful yet introspective love song, again marrying perfectly with his narrative style of singing.

It’s amazing how well he takes on so much of his own character vocally, as this is another song written by the Lennon and McCartney songwriting powerhouse. What cannot go noticed is the epic drum fill out of the first chorus at 0:39 – it’s classic Ringo Starr showmanship, singing the lead and taking a huge drum fill when he’s not.

In the high vocal register of the bridge, Ringo knows his limits and just does the response vocals, “I need somebody to love”.

Don’t Pass Me By: don’t pass Ringo by

The fun, eclectic album The Beatles – or better known as ‘the white album’ – released in 1968 saw Ringo sing his own song for once, Don’t Pass Me By. In true Ringo style, he sings in his laid back style while the accompanying music is playful, with a country 2-step bass part, tack piano recorded into a Leslie Speaker (tack piano is a piano with thumbtacks placed on the hammers of a piano to give it a distant sound hitting the strings), and a featured violin from guest Jack Fallon. All together it makes you feel like you are in the saloon that was just sung about in the previous song, Rocky Raccoon.

Even though the song was reported to be written in the early 1960s, it’s a good thing Ringo held onto it. Don’t Pass Me By was received very well by fans and critics and was later claimed to be the band’s favourite song on the white album.

Co-written by fellow Beatle George Harrison, the song Photograph released on Ringo Starr’s 1973 album named Ringo was a commercial success. The lyrics, which focus on lost love, clearly spoke to audiences around the world – it was an international hit.

The melody is catchy, there’s a saxophone solo, percussion galore, and interesting chord movement, especially the minor-sounding pre-chorus section. Ringo’s vocal is more refined and sung, unlike his casual, almost narrative performances when he sang his songs with the Beatles. But he still doesn’t take himself too seriously.

Ringo Starr has recorded and released 20 solo studio albums since the Beatles broke up. He’s prolific in his writing and recording, having released an EP in 2021 called Zoom In, and again in his don’t-take-yourself-too-seriously attitude, he released an album called What’s My Name in 2019.

Ringo was deadly serious about acting. He was a star in all the Beatles films, acting around his band duties — he was in a 1968 film called Candy — and took it further when the Fab Four disbanded.

He would go on to act both as himself, supporting characters, and as a lead actor in the 1981 film Caveman alongside Dennis Quad and Barbara Bach. Ringo and Barbara would then marry after meeting on the film.

His most notable career in TV and film is his role as the narrator on the children’s show Thomas the Tank Engine, a spot that ran from 1984 to 1990.

Ringo has made many appearances in music documentaries, a Monty Python episode, and has been solidified in pop history in The Simpsons in an episode called Brush With Greatness aired in 1991. His work as an actor after the Beatles was almost as busy as his music career he was prolific with.

Ringo Starr is putting Keith Richards to shame in his ability to live on as an icon. For someone who had his position sitting at the back of the world’s most famous band, and not even being a founding member, he surely has a lot of the spotlight on him.

Keep on flicking us that peace sign Ringo, we love it.