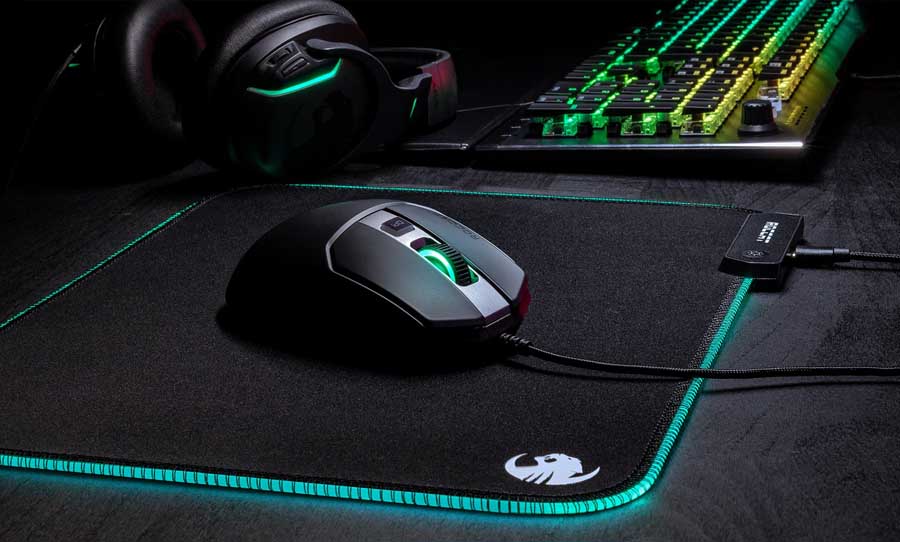 If there’s a ‘next step’ in the world of gaming peripherals, it’s going to be decorative. As it stands gaming currently leads the charge on integrating exciting new tech into products, be it curved monitors, 3D audio, or even liquid cooling back in the heyday.

Performance has always ranked first, though the last several years has seen the rise of modular lighting setups, decorations, and more come to the fore – purely aesthetic options that make your battlestation feels even more you. The AIMO series from ROCCAT attempts to meld these two worlds, integrating RGB lighting into mice, keyboards, and more that doesn’t trade good looks for function.

Not just a pretty face: the AIMO series from ROCCAT marries the cool-factor of RGB lighting with pure, unrestrained performance.

To get a broad idea of the AIMO range and how it plays together, we hooked up a Kain 200 mouse, a Vulcan 120 keyboard, and the Sense mousepad. It’s worth noting that the series functions best when together, meaning any unit with the AIMO Intelligent Lighting System (dubbed Living Light by the brand) will sync straight out of the box.

The Vulcan 120 keyboard is hard to talk down, having already taken home a few awards. The brushed aluminium plate feels dense and nigh unbreakable, not to mention stylish. Your first impressions of the keyboard will be of its weight and build quality; everything from the Titan Switch keys to the detachable palm rest feels extraordinarily well-considered.

Despite each key being individually fitted with a fully configurable LED, presses feels quick, tactile, and light without any flimsiness. Having tried a fair few mechanical keyboards at this point, the Vulcan absolutely sits near the top of the spectrum in terms of overall feel.

The specs are what you’d expect and more out of an all-bases-covered mechanical keyboard in the $200 plus price range; an 1.8mm actuation point and a 3.6mm switch travel distance account for the delightful key presses and a lightning response. Quality of life features are there too; the palm rest is detachable as mentioned, all keys are remappable and benefit from ROCCAT’s Easy-Shift tech, and a 1.8m USB cable is more than long enough for whatever setup you’re packing.

Like the keyboard, the Kain 200 mouse handily sits beside its high-performance brethren while maintaining that ever-so-delicate style factor. Clicks – as with the keyboard – feel receptive without being too light on the touch. Feedback on the wheel is similarly satisfying, sitting right in the Goldilocks zone between too rigid and not rigid enough.

The Owl-Eye optical sensor brings a staggering 16000dpi to the table, tracks acceleration up to 40G, and speeds up to 400ips, making it one of the most precise wireless mice on the market. A 1000mAh battery will afford you 50 hours of playtime between charges, though that does drop to 35 hours with the lights on, but another 1.8m USB cable means you won’t be forced into any charge breaks.

The Sense mousepad is a little simpler than the mouse and keyboard but you know, it’s a mousepad. The machine-stitched surface feels excellent under your mouse at all speeds and a rubber base ensures it won’t go sliding across the table. The point of difference here is the AIMO lighting and the possibilities it opens up – on the Sense your lights sit under the mousepad like neon beneath a souped-up streetcar.

Which brings us to the lighting itself. Once you’ve installed your drivers you’ll be able to download ROCCAT’s Swarm software suite, which is what you’ll be using to customise the lights on whichever device you’ve purchased (alongside key configurations, personalised shortcuts, and heaps more – but we’ll focus on AIMO here). With 16.8 million colours to choose from, it’s possible you’ll actually sink more time into this than whatever game you sat down to play.

Swarm in itself is an impressive piece of software that dwarfs other RGB lighting tech I’ve encountered, such as Philips’ popular Hue. Each piece of hardware is customisable to the nth degree, from individual button colourings to a range of effects that respond to touch, gameplay, and heaps more. Whether you want lighting that changes per each game you boot up or a general colour theme that suits your workspace, all the options (and everything in between) are there.

If you have an Alienware PC or laptop, you’ll also be able to control Alienware FX natively through Swarm. An app version of Swarm is also available, if that’s your jam.

Whether you’re a junkie for PC aesthetics or a power gamer looking to liven up your station, there’s not much you can do to argue against ROCCAT and AIMO. This is no trend follower attempting to capitalise on flashy RGB tech while it’s in the limelight, this is powerful gaming hardware that provides highly customisable lighting options – both aspects of these products standing as some of the market’s finest.

Find out more about the products reviewed here: How to name a gaming mouse in 6 easy steps