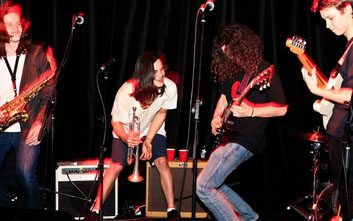 And now for something completely different. Thunder Fox, a Sydney 6 piece with style.

Self described as a “psychedelic funk explosion”, the band are certainly that. Consisting of Sam Dawes and Sam Frank on vocals and guitar, Connor McCool on Bass, Amanda Clarke on Drums, Jesse Tachibana on Trumpet, and finally Travers Keirle on Saxophone, have a sound going on that is really going on. Having just released their EP Don’t Forget the Cherries, this is a group who are quite unlike anything you are likely to hear or have been listening to recently.

Their genre, as they have described it, is psychedelia mixed with an eclectic funk explosion, genres that often fall by the wayside in the face of the electronica, alternative and pop music that seems to dominate so much of our airtime. This does not mean however that it’s a genre without merit, or a genre that doesn’t bring a listener great pleasure when engaging with it’s infectious licks, sensual vocals, crescendos and quiets and stirring brass that make up a grandiose. Thunder Fox brings a full bodied sound, accessible to more ears than many mainstream would care to assume.

Don’t Forget the Cherries is a fantastic first effort for the band. The two song, twelve minute release sounds like it came from a band straight out of a 1960s time capsule. Filled with complexity on the back of some incredibly strong arrangements, Don’t Forget the Cherries is an expression of the groups musical prowess and a product that is genuinely fun to listen to. Thunder Fox, a 6 piece pack of legends is making smoother than criminal music. Complete with saxophones oozing in, this band really has it going on.

The first track, You’re So Hard On Me, erupts with a great guitar lick that sets the platform for a real powerhouse of an opener. Driven by some excellent contributions from both the drummer and the bassist, the brass and guitar feed off each other as the funk vibe becomes more evident by the second. The strong instrumental introduction leaves you both excited and apprehensive about the vocals to follow and boy do they deliver. Sam’s high pitched but distinctly masculine voices, which become more prominent in Sex & Food, ooze the energy and sex that is so synonymous with the genre. Harmonising regularly with great aplomb, the sound becomes complete, and for 2 and a bit minutes the plight of disgruntled lovers is laid out in the way the genre commands. Edgy, sincere and visceral, the chorus of “Baby, baby, baby, baby you’re so hard on me” burns in to your mind along with the funky musical arrangement accompanying it.

Around two and a half minutes an epic instrumental leaves no stone unturned. The star of this period is undoubtedly the excellent guitar soloing that showcases the playing ability of the two Sams who quickly become more than just sexy voices. This is soloing by two incredible guitarists. Transitioning from a slow down in tempo to a complete change in melody, instigated by drums, bass and brass alike, the song takes on a new form of what feels like a well rehearsed jam and oh how it adds to the piece. The musical skills of the band are on show as the bridge morphs back in to the opening riff accompanied by the scintillating guitar solo. The song ends with a reprise of the chorus, tying together, a fun, funky and excellent piece of music.

You’re So Hard On Me leaves you eager for more. Sex & Food is certainly more. In a move away from the themes and fast pace of the opener, Sex & Food is a soulful exploration of a deep, deep love. It is a track that makes you want to slow dance with a passionate lover in the Willy Wonka factory, or maybe a place with as extravagant but more wholesome food. It truly is a track that takes you away to a different place and era.

The drums set the scene for this piece. The drum frame, bass drum and a high hat is all that is required to create that smokey 60s bar mood with great effect, allowing the other guys to do their thing. Working in tandem with the drums is an excellent bass line, which ebbs and flows with and around the music, not really as a constant driver, but more as a melodic component. Measured, never over doing it and on point. At times it sounds as though the bass is being played on a double bass as opposed its electric counter part, which only adds to the aesthetic the band looks to create in the initial part of the track.

It is from this base that the subtle guitar parts dance in and out of the brass, which could be the pick of the instrumental component of the song’s first four and a bit minutes. The saxophone and trumpet in unison sound brilliant and give the slow track a great body as they lead in the vocal crescendos at the end of the first verse and continue to do so throughout. Again not guilty of overuse, the band makes sure that all of their sounds are bringing the best out of the combined sound, a mark of a great cohesion and musical understanding.

The Sams’ vocals cap off the scene that this song sets. Again oozing with energy and sex, the band has penned a fantastic love ballad, leading your imagination astray, while also leaving enough room for you to conjure your own interpretation of the feelings being conveyed through the sensual lyrics. Following the lead of other sex and food enthusiasts such as Action Bronson, Sex & Food does wonderfully well in likening lovers to mouth watering treats. The lines “You’re like chocolate mousse, or sweet tropical juice, let me sip you, I get excited, get excited by this feeling with you” and “I’ll sip you till there is nothing, left, and fill you back up with my best” really indicate that food could truly be the secret to unlocking the cold heart of the modern man. The vocal performance is classy. There great deal of range that is commanded of the singers with loud and quiet parts dictating fairly regular changes in volume, pitch and tone that are nailed on the vocal track.

To us, this EP is the band’s explosion and ode to some of the greatest psychedelic tracks of all time comes in the form of their track Great Gig In The Sky. The note progression of the solo is very similar to the vocal performance of Clare Torry in the Pink Floyd classic. In particular around five minutes thirty and the six-minute marks, the wailing notes of the guitar solo are exactly the same as those of Great Gig vocal. As Sam opens up, wailing along in unison with the guitar, you sort of marvel at how well put together Sex & Food really is. It is a great way to finish the track, an epic climax befitting of the fine music that preceded it and another indication of this bands adept musical knowledge and know how.

Sex & Food is the star of this EP and we imagine it will also be a cornerstone of the bands first feature length release.

Thunder Fox, Don’t Forget The Cherries – what more can we say. Provocative, stylish and fluid, this EP is definitely worthy of your undivided auditory attention. Already a regular on the Sydney live scene, these guys will get you shaking your groove thing.

You can catch Thunder Fox at the Oxford Circus on June 4th launching their new video.