Having Thriller on your resume isn’t such a bad thing. The Shure SM7B has been a staple of recording since and has continued to be at the pinnacle of the industry.

The Shure SM7B has the reputation of being a modern marvel, but like many classics of the studio, it’s lineage stretches far back. Also, this humble dynamic had quite the breakthrough off the back of the biggest album in history.

Imagine the year is 1982 and you are Michael Jackson. You are 23 years old. The commercial and critical success of Off The Wall is nearly three years behind you. But you’re disappointed. Disappointed because Off The Wall didn’t win Record of The Year at the Grammys, and you feel undervalued by the music industry.

So you get back together with Quincy Jones to make an album with nothing but hits. Pop music’s version of Tchaikovsky’s Nutcracker Suite. With a $750,000 production budget, you have almost unlimited options in fancy microphones and high-end production equipment. But you, Quincy, and your sound production team decide to go with the Shure SM7B – a modest dynamic cardioid microphone used primarily in radio broadcasting and spoken word – to record most of your vocal tracks, and all of Vincent Price’s (in two takes, no less!).

The result? Thriller. 65 million copies sold. Certified multi-platinum 30 times. 8 Grammy Awards. An album that, in 2016, remains the best selling album of all time. Now, one could argue Michael Jackson could’ve sung Thriller into an empty coffee tin and still make audio gold. But the fact remains that Shure’s SM7 line of microphones has captured some excellent sound and can boast some legendary chops.

In addition to Thriller, the SM7 (now the SM7B) is a weapon of choice inside broadcast booths around the world and has fans in a number of recording artists, including Sheryl Crow, who favoured it on her The Globe Sessions record. According to Bob Dylan’s engineer Chris Shaw (as quoted in Bob Dylan: All the Songs by Phillipe Margotin), the legend of folk’s tone was perfect for this large-diaphragm dynamic.

So what’s made this dynamic cardioid microphone – originally introduced in 1973 – a studio icon that’s withstood the test of time? The short answer is that the SM7B can do it all.

But before we get there, the version you can buy today, the SM7B, has had a couple improvements since its disco-era upbringing. After more than two decades without an upgrade to the SM7, Shure released the SM7A in 1999. That model offered an improved humbucking coil (a transducer that helps cancel out interference) and yoke mount (the sling-shot shaped mounting attachment). Two years after that, the SM7B hit the market with a bigger windscreen. 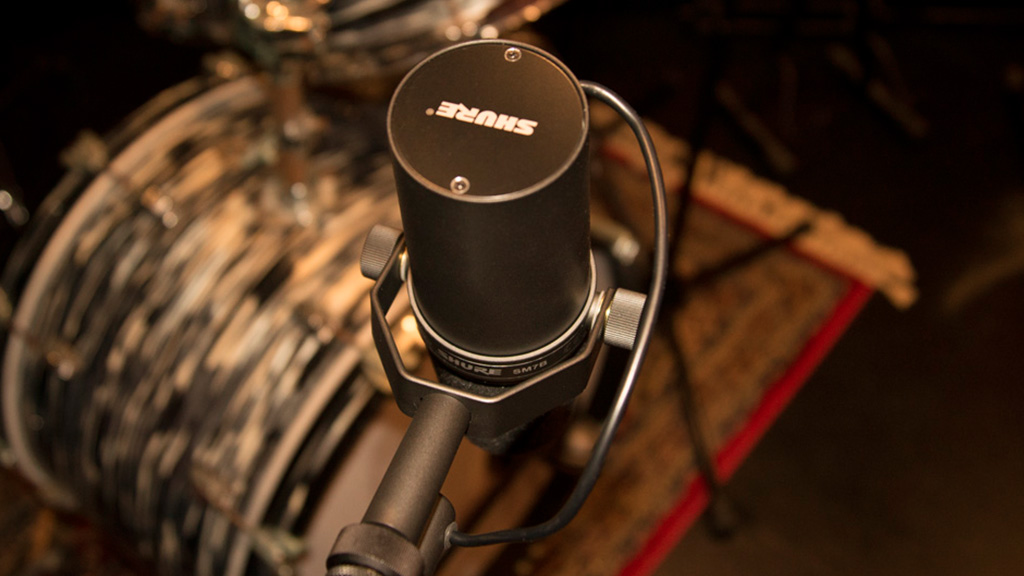 According to Shure’s Davida Rochman, the SM7 story really begins with the SM5 broadcast microphone, “A dynamic boom microphone that found a home in many radio and film studios following its introduction in 1966.”

The SM5 was beloved, but huge (measuring about 25cm long). John Born, Product Manager at Shure, said in Rochman’s 2012 interview that a group of Shure acoustical engineers were given the Unidyne III cartridge element from within the Shure SM57 (cousin to the SM5) sometime in the 1970s. The engineers were told, “without restrictions on size or cost, to make it better. And they went nuts.”

The result is that the SM7B is optimised for low end response (the deep, big bass sound heard in many of today’s recordings). The shock mount is optimised to reduce stand vibrations. Rochman says the SM7B “does a good job of masking a poor recording environment, handling a screaming vocal, and performing double-duty as a drum or guitar amp mic.” It makes for an excellent instrument mic and vocal mic in live sound broadcasting and recording.

Over time, the SM7B has become the industry workhorse, partly because it’s a $350 microphone that compares – and occasionally bests – other studio microphones that can cost hundreds of dollars more. The recent rise in podcasting has helped the SM7B too, as demand has increased for high-quality voice-over mics at an affordable price. As Harvey Gerst says “[The SM7] is one of the finest mics that Shure has ever made.” And of course, having Thriller on your resume doesn’t hurt either.

• Flat, wide-range frequency response for exceptionally clean and natural reproduction of both music and speech

• Highly effective pop filter eliminates the need for any add-on protection against explosive breath sounds, even for close-up vocals or narration

• Now shipping with the A7WS detachable windscreen, designed to reduce plosive sounds and gives a warmer tone for close-talk vocals

You can listen to audio samples of the SM7B at Shure’s Mic Listening Lab. For more information on the history of the SM7B, see Davida Rochman’s excellent 2012 post SM57 on Steroids: The Shure SM7(B) Story and Silent Sky’s 2013 post The Shure SM7B – Magic Mic, or All Hype?

Why you need one and how to get one

Now, in the age of content — especially non-musical audio forms like YouTubing and podcasting — the need for tough but easy-to-use gear has never been more acute. Even if you’re not completely au fait with the nuances of microphone technique, the SM7B will forgive you.

The slight downside of its lack of sensitivity is that you’ll need to gain it up a fair bit in comparison with other dynamic mics. But the positives far outweigh the negatives; you can position and reposition it easily, without fear of dreadful microphonic thumps, you can really lay into it and not worry about distortion. Best of all, it just has that polished, tight and punchy ‘broadcast’ sound.

Considering its popularity, it’s damn near ubiquitous. Most music and audio retailers price the microphone at around $750 AUD. No secret tricks here — just Google it for dozens of options. The most comparable big-name competitor, the Electro-Voice RE20, comes in at around $100 more expensive. Shure has also brought its own tribute into the market: the MV7. A much cheaper USB version that reflects the ethos of user-friendliness and the trademark SM7B sound.

A key to the ongoing success of the SM7B — in some ways — is its lack of competition. It populates a narrow portion of the microphone market: cheaper than most high-quality large-diaphragm condensers, more expensive than most dynamic microphones, but of a much higher quality.

There are, however, a few models that accompany the SM7B in this rarified air. Dynamic microphones that possess character, quality, and durability that ensures decades of faultless function. Let’s check ’em out.

For many, the RE20 is the like-for-like alternative to the SM7B. There are few mics that can match the all-around versatility of this military-grade monster. It’s big and heavy, but actually quite sophisticated.

Its frequency response is exceptionally flat for a dynamic microphone, but it does have a pleasing bump between 5 and 10 kHz, which makes it one of the world’s favourite broadcast microphones. But it’s also just as ‘at home’ on the inside of a kick drum or on a bass cab. This classic has been kicking around the studio and the stage for decades — and when you hear the quality of tone it can reproduce — it’s not hard to see why. Originally designed to be a handheld reporter mic, it’s as rugged as it gets, and can reproduce clear, warm vocals in any environment.

And though it was created for all-action reporting and press conferences, the M 88 has found a home in high-end studios all over the world. Why? Its combo of hypercardioid polar pattern and its ability to take a shit-tonne of SPL makes it a winner all over the drum kit and in front of any amp you can think of. 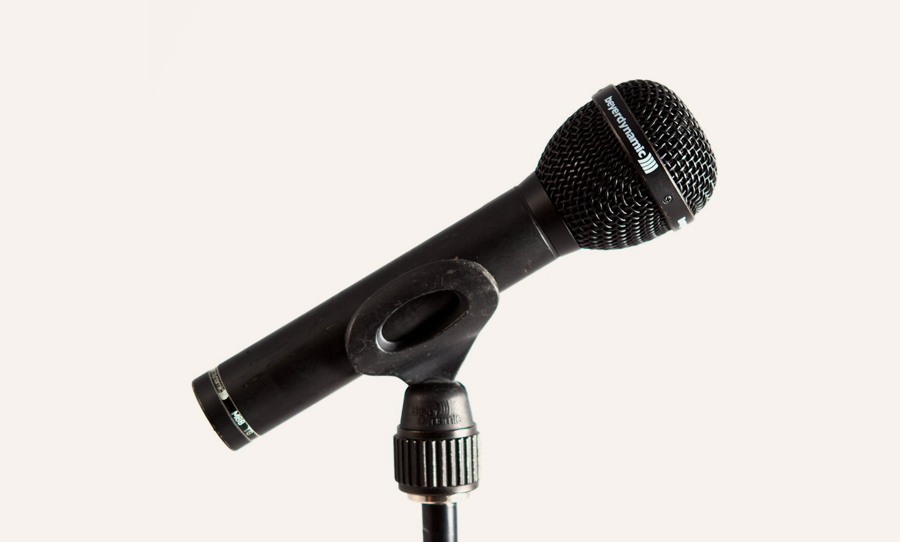 The 441 represents the pinnacle of Sennheiser’s microphone design. Its long, sleek body isn’t just for aesthetics though. Of all the dynamic microphones around today, it has the most ‘condenser like’ qualities, namely, relentless attention to detail.

It’s a premium choice for the stage; it still has desirable dynamic characteristics — a high degree of off-axis rejection, for example. But in terms of reproducing articulation in the top end, it leaves lesser dynamics (and a lot of condensers) trailing in its wake. One caveat though: while the aforementioned mics sit around the same price point, the 441 is a much more expansive proposition at around double the cost of the SM7B. So whether you’re in the studio for musical reasons, or creating your next podcast, the SM7B is one of the best bang-for-buck pieces of gear you could invest in. It’s no $10,000 Neumann, but you’d still be tempted to put this mic in front of any vocalist.