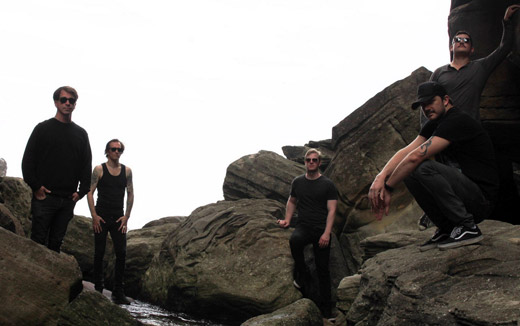 Nine out of ten Buddhist philosophers will recommend that fans of sludgey, riff-laden stoner metal who suffer regular existential crises should make a journey to Mount Meru; mythical Buddhist mountain, boundless centre of the universe and namesake of Sydney rockers Sumeru.

As the demon spawn of past and current members of Blkout, Lomera, Firearms, Shake Your Blood and No Apologies, Sumeru draws on a wealth of past experience and fuses it with the wisdom of Buddhist philosophy to create music that is both heavy and groove ridden, while featuring a lyrical concepts that speak of something bigger than music itself. The mighty stoner metal gods Sumeru have a new LP and it’s the perfect sample of their experience, their expansively robust sound and demanding vocals.

Since its inception the five piece outfit featuring Matt Power (Vocals), Peter Bursky (Guitar), Chris Wilson (Guitar), Reg Barber (Bass) and Andres Hyde (Drums) have already made great headway. After releasing their four track self-titled EP in July of last year (via Bandcamp), Sumeru have been touring the country extensively and are now set to release their first full length album Holy Lands (Whitewinter Records and Arrest Records Australia). With your ear to the ground you will be sure to hear the approach of this stoner rock behemoth on the 6th of October.

Taking a more ‘stoned out’ approach than some of their previous projects, Sumeru takes the pure brutality of the Australian hardcore metal scene and put it in a hot box with stoner rock bands like Clutch, Kyuss, and Fu Manchu. The result being something like an Aussie Church of Misery that features a series of thick bluesy jams that ooze with power, drip with juicy guitar solos and smell like something you wouldn’t smoke after dinner at your mum’s house.

My new favourite song and title track of the upcoming LP Holy Lands, serves as the perfect sample of Sumeru’s sound, experience and dynamism. The low end slams your ears like a clap of thunder and gives way to a head banging, foot stomping groove complete with commanding vocals and blistering guitar solos that give the impression that these guys could topple mountains with their sound alone.

They’re also supporting Torche at the Oxford Art Factory on Sunday 19th October so you don’t have to wait til the end of the month to see them!