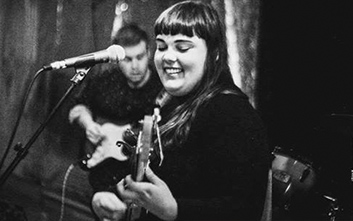 With a 50/50 gender ratio (yay, female musicians!) Melbourne four-piece Totally Mild offers us something totally wild. With female guitarists, pianists and singers, Totally Mild is set apart from a lot of the big names on the triple J rotation. While there are a lot of female artists on our air waves, they’re mostly all solo acts; it’s rare to find a band that 1; has equal gender representation and 2; has their female artists as the face of the band. It’s part of their brand and adds to the fabulousness of their music. Led by the impeccable vocals of Elizabeth Mitchell, Totally Mild continue to mesmerise with their new three-track Alive in Denmark.

Their new EP Alive in Denmark is a collection of live recordings taken from their most of 2015’s “Totally Terrible” tour. Totally Mild gifts us with two original gems (and one golden oldie) that we are eager to add to our collection and buff and polish on a regular basis. Especially if that means getting more lady guitarists in my life. Growing up all I had was Avril Lavinge as inspiration, so it’s refreshing and exciting to see new faces presenting us different music.

Totally Mild made quite a splash with the release of their debut album Down Time and wowing crowds at the BIGSOUND showcase, and they’re not letting up for a moment. Their tune More opens with a slow, echoic and relaxed guitar riff, lulling you in to a sense of security, thinking you know exactly how the song will turn out before you’ve even heard past the thirty second mark.

When the vocals come in, it’s not the slightly high pitched and gravelly male voice that almost exclusively accompanies this type of music, but rather it is a low, strong yet velvety female voice of Elizabeth Mitchell that greets you. The song then picks up tempo in the second verse and the feel good, relaxed vibe that pulled you in starts to evaporate and a sense of urgency kicks in.

The Next Day, taken form their Down Time album, makes excellent use of climbing up the scales on the guitar, with crescendos and decrescendos all around, taking us on a ride of emotions and vocal pitch. Their EP may be only three tracks, but Totally Mild are showing no signs of slowing down any time soon, their creativity blooming.

With a three week tour across Europe under their belts, we can’t wait to see what their music is going to evolve into. Love of Diagrams deliver the 90's shoegaze aesthetic on Blast