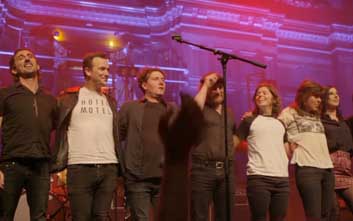 A couple of months back, in celebration of the 40th anniversary of Patti Smith‘s seminal debut album Horses, Courtney Barnett, Jen Cloher, Adalita and Gareth Liddiard of The Drones all got together at Melbourne’s Town Hall for a very special, one-off performance. Although most of the footage of the evening has been live on YouTube for a while now, it was only last night that the footage of the finale went live. It features Barnett, Cloher, Liddard and Adalita firing through a manic rendition of The Who‘s My Generation with each singer taking turns on the microphone to scream their way through 1965 classic.

The video climaxes with Barnett flat on her back after screaming her guts out, followed by a group hug featuring all members of the band. It’s a pretty wonderful tribute to one of the greatest albums in the rock ‘n’ roll canon.