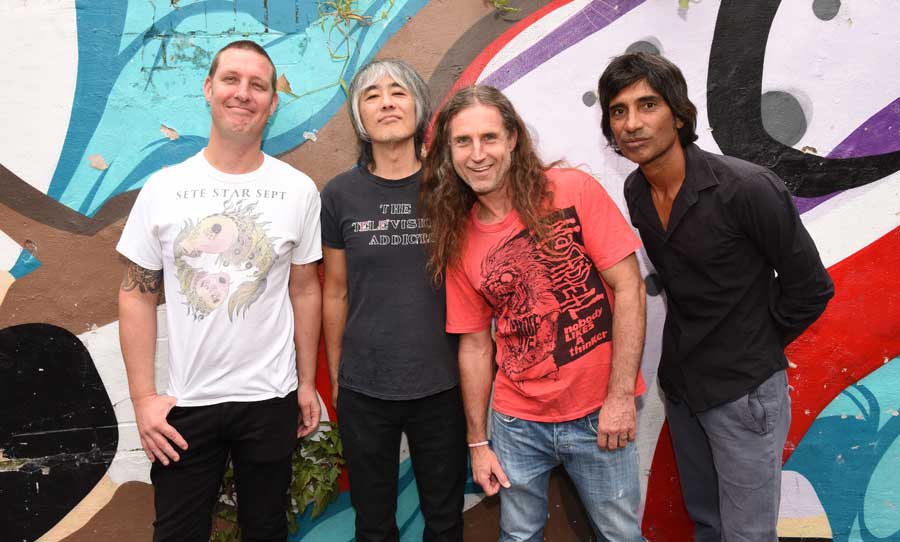 Almost 10 years ago, Ray Ahn from the Hard-Ons gave me a copy of their Live At The Annandale record on vinyl. Inside the sleeve was a zip-lock bag with a pill and a toothpick – a kind gesture, but I never took the pill. Today I finally got to ask him what the hell it was.

They’re also playing the Happy Mag Issue 14 Launch this Friday in Newtown. Before that all goes down, we spoke to Ray about early Aussie punk music, keeping things archived, and much more. What has made the Hard-Ons so enduring? We speak to one band who has remained a bastion of Sydney punk since 1981.

HAPPY: The first time I listened to you guys, I was about five years old… you had a couple of songs on a compilation CD my Dad owned called Do The Pop. That same CD got me onto a whole heap of other great Aussie bands; Lime Spiders, Celibate Rifles, and more. But looking at that list of bands now, I think you’re the only one that has consistently been gigging ever since. Out of curiosity, roughly how many gigs do you reckon you’ve played over the years?

RAY: About 1500 shows I think! I know that in 1991 I think we did something like 200 shows. We started playing at local dances and private parties starting in early 1982. Our first proper pub show was when Blackie, our guitar player and youngest member, turned 18 – the legal age to enter such premises. That was in July 21st 1984, at the Vulcan Hotel in Ultimo. Back in 1984, the Australian pub circuit for bands playing live music was wide and varied. We played all over the suburbs of Sydney, twice, three times, four times a week, then in 1985 we started going interstate.

In 1987 it looked like we were going to tour Europe and USA but that was my final year of university, so we left for Europe and USA in April 1988 the following year. Since then we’ve toured Australia countless times. We’ve been to Japan six times, New Zealand seven times, USA four times, Mexico and Argentina once each and in October we will make our 20th trip to Europe. Unless the coronavirus situation prevents it. We broke up from 1994-1998 so that was four years of dormancy too, so I think we’ve been quite fortunate to have played that many times.

HAPPY: Why do you think Hard-Ons, over so many other bands, has been so enduring?

RAY: Pure luck I would say. There have been bands that are certainly more musically talented that’s for sure. But we started together in high school. In fact, Blackie, Keish, and I met each other firstly in 1976 in primary school, just one year before the punk rock explosion took over the musical world. So, the timing was pretty good. Because we knew each other very well, we got along well enough not to have the band come to a stop over fights and so on. Plus, at the very beginning we decided to call the band the ‘Hard-Ons’ and in 1982 we knew that such a name would not fast-track our stardom in the mainstream.

So we always felt that we never had anything to lose. When a band plays like it has nothing to lose and is answerable to nobody, that band enjoys a tremendous and unthinkable sense of freedom – which in turn creates a very good environment to do creative things. We enjoy playing in this band. We still have unbreakable self-belief.

HAPPY: Did you have any favourite bands from those early Smell My Finger/Dick Cheese years that you really loved playing with?

RAY: Our buddies Massappeal, Poison Idea, Spunk Bubbles. We did a lot of gigs including tours with Massappeal from Sydney. We knew them before they formed the band. In the case of Spunk Bubbles, we were all friends before our bands were formed. The Hard-Ons did not belong to any specific musical scene. We had fans from the punk scene, the hardcore scene, the ’60s garage scene, in the early days we’d see mods at our gigs as well. We also appealed to the average Australian music fan that enjoyed the louder styles of music. Australian audiences loved loud music live, we felt right at home on the pub circuit. We managed to drag work from all sorts of situations, that helped us play a hell of a lot of gigs and once we became popular enough we gave all the support slots to our friends who happened to be in killer bands.

HAPPY: I feel like so much great Australian music from the ’80s went largely undocumented. But you’ve always kept gig posters and diaries, right? Do you still own an archive of everything the band has done?

HAPPY: What made you start documenting the band’s movements in those early days? Not too many people seem to have that kind of longevity in mind…

RAY: I started writing down every show’s details on foolscap paper for my own sake and also kept diaries of tours. Not sure why. I stopped doing it in 2009. One reason might be that every gig was action-packed. There might be a huge donnybrook here, a stage diving injury there. I wrote these details down. I wrote down the names of bands we played with. In our first year we played with The Saints, The Wreckery, Crime and the City Solution, Lime Spiders, a whole bunch of legendary and important bands, and being really young, we were loving it.

HAPPY: Would you ever look into launching some kind of online archive where people could browse through everything you’ve kept?

RAY: Not really. It would be boring for everyone including ourselves. Can you imagine the work involved? FUCK THAT. In all seriousness and honesty, I really think the world does not need that level of detail. If those trainspotting details were made public for anyone to have a gander at, about seven people might seriously want to have a look at it.

HAPPY: I’ve got a copy of your Live At The Annandale album at home… it’s still got a little ziplock bag in it with a pill and a toothpick. What’s the go with that? I’ve never known what it is. Will it get me cooked?

RAY: That pill is an after dinner mint. The music inside is tasty. After consuming the music, you use the tooth pick and mint. It is a social ritual.

HAPPY: With that above-mentioned record… you personally gave that to me one day in a record store when I was 13. It really meant a lot. Looking through your fan page on Facebook, and talking with other fans, it’s clear that you’ve done a lot of similar things over the years for lots of different people. Not many bands interact with their fans in that kind of way. Why do you feel it’s important to keep that relationship so open?

RAY: I don’t feel that it is important to keep an open relationship with any fan. It is just how this band is. Other bands may be completely different and impenetrable. That would be their right. This is just how we happen to be. It isn’t important. Just the music is important. And our music is quite good. That is important. Our behaviour is not important. In my case, my mother and father brought me up in a certain way. That may be why I am like this. I don’t know.