Thelonious Monk was a pivotal figure in the evolution of jazz by using dissonance as an asset rather than a mistake. While often imitated, and thoroughly studied, none have come close to what he was pulling off over 70 years ago.

Throughout the ’50s and ’60s it was commonplace for jazz artists to be cutting at least two albums per year. Like many jazz greats with lengthy careers, Monk’s is brimming with astounding, groundbreaking albums right across the board.

Born 103 years ago in 1917 it might appear hard for younger listeners to connect with an artist from a different time but there is something here for everyone. By default Monk will connect you to a plethora of jazz’s biggest names such as John Coltrane, Art Blakey, and Sonny Rollins. Sporting some of the finest album covers of all time Thelonious Monk truly is a jack of all trades.

Without further adieu this is Happy’s Guide to diving into the brilliant mastermind that is Thelonious Monk in 5 essential albums.

Thelonious Monk was one of the finest jazz pianists there ever was. In remembrance of his unbridled genius we have collated 5 essential albums for getting into the Monk.

I believe this album is te perfect entryway as it introduces you to three of jazz’s biggest figure heads. Thelonious Monk, John Coltrane, and Art Blakey. Furthermore it sports one of the coolest album covers around. If you don’t like seeing Monk bunched into a little red wagon holding a xylophone then you’re heartless animal.

Art Blakey’s presence of mind on Epistrophy when pushing the beat on the hat and kicking the groove is what makes him so brilliant. Coltrane also has plenty of air time too. Though there’s no suaver moment in jazz than hearing Monk shout “Coltrane! Coltrane!” before the sax-man takes his solo on Well, You Needn’t.

Joined by Sonny Rollings, Ernie Henry, and Clark Terry, this is Monk’s most studied and perhaps accessible album. Many of these tunes – Bemsha Swing, Pannonica, Brilliant Corners – have all become jazz standards.

The title track was patched together by Riverside Records spearhead and producer Orrin Keepnews from fragments of no less than 25 incomplete takes. The complexity of the first track has achieved something like legend with Monk’s trademark juxtaposition of chords and melody.

Historically, Monk’s Dream marks a pivotal moment for the jazz cat as it’s his first album with Columbia Records, marking a departure from Riverside after an iconic six year stint.

The quartet here are in fine form. John Ore and Frankie Dunlop swing with such vehemence and passion that Monk and saxophonist Charlie Rouse are abel to tear some of the most virtuosic solos ever put to wax.

Named precisely for Monk’s left-field strangeness, Misterioso sports a Salvador Dali-esque cover – born 10 years before monk. It captures him and his famous Quartet in fine form the Five Spot Cafe in New York.

The playing is frenetic and there is a real urgency to the pieces like In Walked Bud as Johnny Griffin tears into his sax. As Robert Christgau puts it Misterioso has become a “lifetime companion,” hailed for it’s “dissonances, aka harmonies, often augmented by the disquieting silences built into their phrasing.”

This album is just about as perfect as it gets. Once again you have a ‘Class A’ Thelonious album cover that looks so abstract its’ straight from the Space Age. What’s particularly special about this record is that it’s drawn from three separate recording sessions. Monk plays with cats like Max Roach and Art Blakey, but ultimately it’s all about Thelonious leading his trio through movements like Bemsha Swing and Little Rootie Tootie and having it go somewhere. Ever wanted to sit in on a jam session with the best, this is your chance!

Monk takes centre stage here and has some magnificently inspired moments. In fact Monk’s entire solo in Little Rootie Tootie is down right mind blowing. He plunks down dissonant harmonies in an edgy persistence that would have Neal Cassady howling from the roof tops.

Simply close your eyes and listen. Monk won’t blow you away with the dynamics of Coltrane or the conceptual vision of Davis but he is a master of form and will tie your mind in knots with his outstanding composition and choice of notes. Give him your heart and he will give you his. 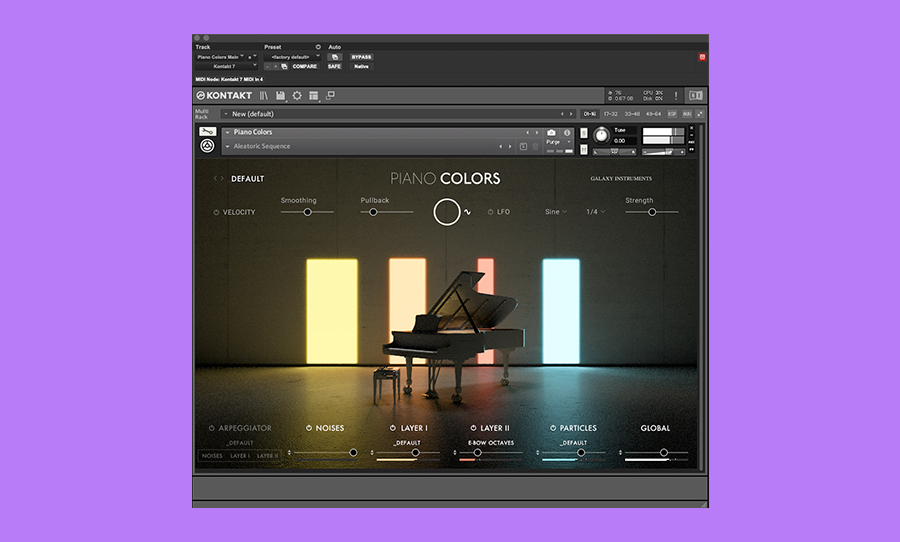