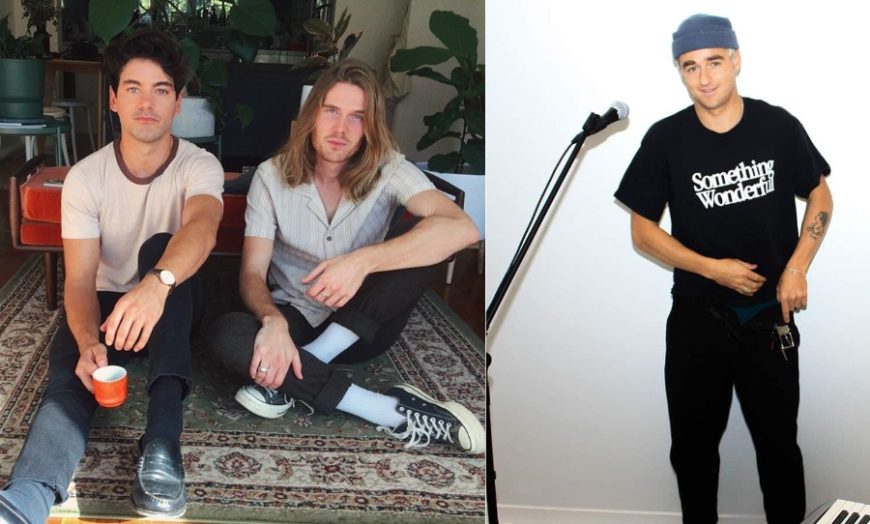 Byron Bay artist, Ango Unchained, chats with Melbourne duo, Handsome Shirt, about the stories and adventures behind their dreamy works.

The creative behind the scrumptious release Chocolate, Ango Unchained (aka. Angus) chats with mates and fellow artists, Handsome Shirt (HS) about the glory of stupid decisions.

Duo Louis and Ellis, born and raised in Essex before settling in Melbourne, embrace the wonder of light within their music. Much like Ango Unchained, they see the value in smiling on the inside before deep diving into the wonderland of indie synth-pop. Check out the boys’ chat below: ANGUS: I’m just sitting outside of a party in my car, drinking a beer and eating a pizza. Tell me your top bars in Melbourne!

ANGUS: What are some sonic influences for you guys?

HS: Yeah. I suppose all the usual suspects, Unknown Mortal Orchestra, Tame Impala and Mac DeMarco. You know, like big crown stuff, old funk records, that sort of thing is big for us as well. What about you? What are sonic implementers for you?

ANGUS: Oh gosh, Gus Dapperton right now is so fresh. Bring me in with his lyrics and his voice is so dope. Yeah, for sure, and you guys (Handsome Shirt)*laughs*.

HS: Let’s talk about Chocolate. What inspired it?

ANGUS: You Louis, when you flew up to Byron, completely fresh off a breakup.

HS: (Louis) Yeah, just needed to escape. And we made Chocolate in a thunderstorm after a few beers and a waterfall trip to get things off the mind. It wasn’t that we just sat down and said, “Hey, let’s make a song”, it was just sort of one of those things that naturally fell into place. But it was just like, again, one thing off the other, and then it was this overwhelming feeling and it became something so fast. I was like, fuck, actually. Yeah. I think that’s what made it so great. The fire didn’t go out – it just grew and grew.

ANGUS: I remember we’re in that zone where we’re just looking at each other and just buzzing knowing we were making something special. How goods FaceTime too *laughs* this has gotta be on record too that Handsome Shirt are the two most, yep probably the best-looking band in Australia right *laughs*.

HS : *laughs* Keep that off the record. I remember the first time I saw you it was you playing in Margaret River and you were playing your first ever gig. And we were just giving you the devil eyes in front of people, just staring at you the whole time *laughs*. We were so impressed. You had the sunnies on, just killing it. We knew there was something special from the start then.

ANGUS: What can we expect in the future from Handsome Shirt?

HS: Yeah. Oh, mate. Just getting by, day to day in this Melbourne lockdown and you know we want to make a lot more music “legally” *laughs*.  It’s kind of how Handsome Shirt was born, locked down. Hopefully, we’ll get to play a gig soon.

ANGUS: And you guys also know that when you play a gig, I get to jump on stage with you.

HS: Absolutely. That’s always been written in the stars for us.

ANGUS: Can I say it, I can see it happening. It’s going to happen before we die.

HS: We’ve got some time. What’s in the future for Ango Unchained?

ANGUS: Well, apart from the massive handsome Ango Unchained concert sold out in Berlin and Tokyo *laughs*, I wanna get back in the studio with Louis the musical genius behind most of my tracks and sing – I just love singing, it’s the feeling I want to chase. The best memory I have of you guys is in Melbourne and you decided to ride to Sydney from Melbourne with 50 bucks between you on terrible push bikes *laughs*.

HS: We did. So when we were in England and we sort of set out to go to Australia, he was like, “I want to do something ridiculous and very stupid”. We had this bike ride idea in our heads, from Melbourne to Sydney and so when we came and saw you, we had our backpacks, pots, pans, swags and then left with $20 between the both of us and set off with no maps, no lights, no punch repair kit, and we were just leaving the CBD and already, it was just like, this is stupid.

There were two things. One, we thought it would be a great idea to sleep on your roof in Melbourne, in the winter too? Then the bike ride we got like 20 minutes or half an hour out of the city and we pulled up at the servo and we’re like, “Okay, this is really stupid”. Then this guy comes over and he’s like, “Boys, what are you doing? Where are you going?”. He was like, “You’re in Dandenong now, but too far to Sydney”. He was gobsmacked. He gave us 50 bucks. That was like, okay, people are on our side here *laughs*. He felt sorry for us. We’re on the right track.

We were just so lucky throughout that with genuine kindness, apart from actually one place when we were like an hour away from a town, but we came across this little Roadhouse thing. They had hot chips and we had like a dollar. We’re like, “Can we get some hot chips?”. She said, “Yeah. The minimum is $1.50”. I was like, “We’ve just ridden a hundred kilometres today and we’re kind of hungry. Can we just get shit for it for a buck?”. She’s like, “No, sorry. can’t do that.” The we got a guy who comes out like two minutes later and he’s got two cold cans of Coke and a massive, large chips for us and we were like, get on your board, tears in our eyes with happiness. Yeah, and he was like, “When you make it to Eden, come see me, you can have dinner at my house” and I’m like, fuck, that’s it, that’s real Australian people. So it was 8 days in total, about 150 kilometres a day.

When we got to Sydney I think we both cried. Yeah, we got to the Harbour, Bruce took a picture smelling like fucking dead rats, but just like the happiest I’ve been in a long time. Yeah. So that was that. That was the story. HS: Let’s talk about what inspired Chocolate, it’s about someone?

ANGUS: It was definitely, yeah. It was just the whole thing with, um, with a girl. The feeling of hope and imagining a future with someone. Hope was also definitely a huge part and smiling. I sung the choruses always smiling. It completely changes your voice. We were watching Masego on YouTube with FKJ and he was just grinning ear to ear singing and it sounded dope. I feel hope and excitement in his voice!

ANGUS: Just a good studio session/jam… How do you describe it? It’s like, you’re going for a surf and you’re about to surf a wave you’ve never surfed. So much angst and froth.

HS: It’s like, yeah, you’re a child and you’re going back to a playground again and you can make all the noise you want, you know, you release those inner wiggles, you just feel safe. Yeah.

ANGUS: Some of the best memories have been with you guys in that studio. When no one says a word and the music does all the talking. Those magic moments when everyone’s zoning off each other and timing is just red hotttt. Magic. How’s single life Louis?

HS: Single life? Um, it’s interesting. Yeah. It’s strange. First time being single in like 6 years. It’s exciting not knowing what’s going to be around the corner. How about you Ango?

ANGUS: It’s been real. I like the place I’m at. I love Byron.

HS: How long have you been there now?

ANGUS: Three years. There’s just the influx of creative people in such a small town is so fucking beautiful. Do you know what I mean? Like everyone’s doing something real cool. I just can’t wait for live music to hit hard again.

HS: It’s tough. It’s tough to be in this empty shell of what Melbourne once was.

ANGUS: I really want to get down and fucking play. I want to play live music at bars. Do you get the buzz? You get it. It’s like fucking pretty full-on. It’s euphoric.

HS: Yeah, man. We want to see you again on stage. Capture those hearts *laughs*.

ANGUS: What’s next for Handsome Shirt?

HS: We got heaps of little, you know, like everyone’s got like maybe 50 songs on their hard drive or something. We’ve got a few definitely stored away that we just need to tidy up and hopefully get out. We’re really, really keen to get some new music out. I think we need it. We want to get some more super eight film and film another video as well. Those two things together are really fun for us. Like your last video for Chocolate was so cool. Visually going with the song. I really want to do something like that for sure.

ANGUS: Yeah. I still find it so beautiful that you have this core following now. I can always just see people driving to your music all the time. Every time I hear you I visualise someone driving down the coast *laughs* driving down a highway with the top-down, easy Sunday. I’m going to get back to this party now *laughs*.

HS: People are screaming your name. You need to get back in there.

ANGUS: I love you boys so much.