Captain Earwax is the musical moniker of Australian multidisciplinary artist Daniel O’Toole. His latest album Volcano Toast is a stunning masterwork of dense, intricate, and texturally gorgeous instrumental beats, combined with the periodic use of vocalists that transform his ideas into pop-infused downtempo electronica delights.

We caught up with Earwax recently to chat about Volcano Toast and the influences behind the album, as well as his production processes and visual art projects.

“I enjoy the hidden layers and sonic surprises that come from world music and the opportunity to meet people from these cultures and collaborate is the best.”

HAPPY: How did the Volcano Toast album come together? Was this different to your previous albums?

CAPTAIN EARWAX: The album has been in the works for about two years now, although there was a track Inhabit Me that ended up making it on which was a bit older than that and seemed to find its home amongst the other tunes. Its been a continuation from the Delicate Empires sound in a way, kind of a fusion between acoustic textures and folk instrumentation with synths, beats and more of a futurist/hip-hop sensibilities. So quite similar to the last album, but I guess a little more collaborative and a bit less ambient.

HAPPY: Could you tell me a bit about the creative process behind your tracks?

CAPTAIN EARWAX: It differs song to song, but usually, I’m starting with drum samples from records or percussion I’m recording myself and I’m using the Midi fighter to trigger drums and play patterns which I find really fun and quick to use. It seems to link with the drum rack so intuitively for my brain, and brings a great sense of play into it all. I feel like grooves and beats are always the foundation, although towards the end of this project I started writing some stuff that comes at it from a harmonic foundation using string parts to build melodic direction and then working off that as the base.

Tracks like Thickets and Lured are examples of that and were actually written with a film project in mind in the theme of Horror. So having a different goal there seemed to change the whole process and outcome, and It’s actually triggered another project with the working title An ocean on my table which is all in that sort of strings and pianos sort of vibe/ less beats heavy.

HAPPY: Where do you draw inspiration from? Does this change between projects?

CAPTAIN EARWAX: I listen to a wide range of music, I play traditional Irish music a lot at home, (fiddle and whistle) and love listening to world music, jazz, hip-hop, electronic… you name it. I think films and other music that I’m listening to inspire me the most. I love artists like Flying Lotus, Bonobo, Clark, The Books, The Dirty Three, Teebs, Hermitude…

HAPPY: Are there any themes that you find consistently crop up in your work?

CAPTAIN EARWAX: Yeah, I seem to have this ancient folk music meets robots from the future thing going on. I love that contrast, and my album names often play with the same juxtaposition.

HAPPY: Did you have a specific intention behind incorporating such a diverse range of sounds throughout the tracks on Volcano Toast?

CAPTAIN EARWAX: Not really, I just make the kind of music that interests me, and that I would enjoy discovering. I’m pretty into the unexpected pairing of sounds and finding sounds that feel ‘new’ or challenging yet alluring. I still want the music to be accessible and relatable for people, but it’s definitely inspired by a lot of experimental music too. I like the idea that someone may discover a new instrument, and it’s unique ‘timbre’ when listening to my records. I enjoy the hidden layers and sonic surprises that come from world music and the opportunity to meet people from these cultures and collaborate is the best.

HAPPY: What first drew you to incorporating tribal and traditional musical instruments and samples into your tracks?

CAPTAIN EARWAX: I met a guy named Bukhu busking on the streets of Newtown in about 09. He played a ‘Morin Khuur’, which is a Mongolian instrument also called the Horsehead fiddle. He was throat singing and playing this Morin Khuur, and I was in heaven. I stood there for ages with a massive grin on my face and experienced a sort of Euphoria. That moment was really overwhelming and exciting for me. I bought his cd and got his number because I knew I wanted to share this sound with people. I was co-running a gallery at the time ‘Oh Really’ where we had jam nights and live painting, so I invited him to come and meet some other local musicians and have a Jam. We have been working together ever since, and since then I’ve travelled to Mongolia with Bukhu and had an amazing experience travelling around the Gobi desert.

HAPPY: Where do your samples come from? Is there a specific workflow to finding the sounds that appear in your compositions?

CAPTAIN EARWAX: I’m kind of just a mad collector of sounds, I buy instruments from op/shops, I collect percussion obsessively, I’m always researching synths and buying vintage gear to mess with the sounds they can make. But I also use software instruments and sample from records, collect field recordings… all of the expected things I guess.?

I don’t have a specific workflow, but sometimes I’ll hear a sound on youtube or on a record or something and then take that and build a sort of wavetable synth out of it. One of the things I like to do is sample a sound with the old Akai S2000 sampler and play it polyphonically with my Moog Model d as the midi controller, and route the output of the Akai through the Moog External input. That allows me to modulate the filter, and add Minimoog model d oscillators to the tone, so I have a mono synth layered with a polysynth, two stages of filtering, and modulation on the pitch of the mono synth as well as the filter cut off for both. It’s an amazing amount of creative sound sculpting for a fairly simple process.

Then, if I’m really going down the rabbit hole, I might start patching through fx units, the space echo or the Ibanez Dm1000 etc. and see where that ends up. I like to re-patch synths through the Rhodes cabinet sometimes and mic up the speaker to get things out of the box too. I find the hands-on tactile approach really fun, it doesn’t always result in efficient songwriting but you will come up with sounds that no one else has.

HAPPY: How would you say your style has developed over time, both in your music and your artworks?

CAPTAIN EARWAX: I feel like there is a pretty cohesive theme running through my music over the years, I suppose it just gets tighter each time I embark on a new project. My stuff is often perceived as super ‘chill’ and ambient, abstract etc. which I guess it is in a way, but I also enjoy harder sounds, and hypnotic grooves. I think the arrangements have gotten more concise and the momentum throughout the new album feels stronger than previous releases. I love dynamics and a sense of narrative, but It can get self-indulgent I think, and I’m trying to make it ‘accessible’ and learn more about conventional song structures and music theory, Jazz harmony ideas, etc. without losing my quirky sound palette.
The same sort of sounds, more neatly organised.

HAPPY: What’d the single most important piece of creative advice you’ve been given?

CAPTAIN EARWAX: A friend of my family, Ed Gaston, was a great Jazz Bass player who I looked up to as a teenager, and I loved hearing stories about his life as a musician, how he had played with Dizzy, Art Blakey all these big heroes of the Jazz world. He had this unwavering faith in me even then, and would say to my Mum (in his American accent) you don’t need to worry about him Linda, he’ll be just fine. To me, I remember him saying, ‘so long as you’re having fun, just keep doing what you are doing. The rest will work itself out.’ Its a super challenging career path, as an artist, but I think his advice, although really simple is pretty on point. (RIP Ed, love you mate)

HAPPY: Are you working on any new artworks or music now/ what’s next for you?

CAPTAIN EARWAX: Musically… yeah I’ve been working on a collaborative project with Lou Millar who I always love working with, it doesn’t have a name yet though.. I’m also making this more film inspired stuff titled An Ocean On My Table and working on scoring it for a string quartet to replace/layer the sample library strings. I’m hoping that project will be an album-length thing, but so far it’s more an EP, will see how it pans out, I also want to re-record the piano parts on my parents grand piano back home in Sydney at some point.

Visually… in terms of my visual art, I’m focussing my studio practice around my video work and how it can inform my approach to painting. It’s moving in some really exciting directions lately, and I feel like I have broken down some walls of fear in my mind about what I can do as an artist. I had a breakthrough creatively about three years back with my ‘unrest’ series, (video transcriptions framed with semi-transparent perspex) but it didn’t gain any traction with buyers or curators. It’s taken a while to bounce back from that and regain my confidence in that direction. I suppose the new work I’m making feels more honest to what I want to express and the street artwork, while I love it feels more like my past than my future. I have been creating a clear divide in the two aspects of my work on Insta recently to clarify in my own mind as well as for others what my studio practice is about Vs my street art and music. The new page is here. 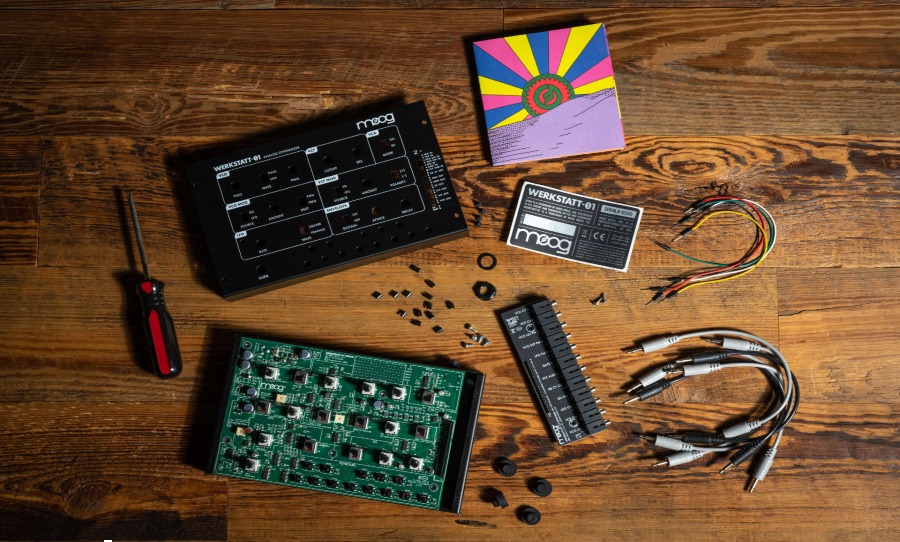 Moog unveils Werkstatt-01: their most affordable synth yet