Jay Watson is sitting in a tent. Next to him is James Ireland. James is POND’s drummer, a quiet guy. He’s happy to let Jay do the talking. When he does, he will embark on a wide-ranging discussion which touches upon snippets of POND and Tame Impala history, Nicholas Allbrook’s revelatory tastes in prog, a critique of Kevin Parker’s taste in the The Beatles, and stray speculation as to what the next record will sound like.

The conversation will then conclude with some dating advice that neither Jay nor Jamie feel qualified to give, but will provide anyway.

Somewhere in between Jay’s three sets at Splendour In The Grass 2019, we gleaned some musical (and romantic) wisdom from POND.

HAPPY: Jay, you’re about to play your third set at Splendour in the Grass this weekend. That has to be some kind of record.

JAY: I did three in one day once at a festival called Desert Daze. One as POND, one as Tame Impala and then one as Gum. The Tame Impala set got cut short two songs in because of a storm. So I did technically do it but I would never do that again, I was having a panic attack before the Tame Impala set. It’s not physically hard but it’s weird mentally. You concentrate really hard for say, 50 minutes and then… I don’t know, it should be easy, but it is actually really hard to play multiple shows in a day.

HAPPY: Being in three bands, Tame Impala, POND and your own project GUM must involve more than a bit of jumping around.

JAY: Actually, it’s really easy. Except now that we’re doing the festival circuits together it’s a bit of a mess… it’s not too bad, but I think sometimes each band forgets about me and I’m just like, left in the middle.

HAPPY: I’ve been reading a little bit into the history of all the Perth bands from which POND and Tame Impala sprang. You were hanging around Perth and met Kevin Parker…

JAY: I played in a band that would play with Kevin’s band up in Northam, at the Police & Community Youth Club and also down in Perth at [all-ages venues like] HQ Leederville. I was a drummer and he liked my drumming. His existing drummer left to be an actor and I joined Tame on drums. HAPPY: How did James enter into the POND equation?

JAY: We knew James for a long time, but he was more of a keyboard player and a producer in Perth.

JAMES: He’s answering the question for me! Keep going.

JAY: There are people who just play drums, drummers. But they often just do what they want to do and they’re hard to corral. Whereas Jim? He just naturally does it. He can do flashy stuff, but he’ll also just do what you would do if you were producing the song. He does it the way a songwriter or an arranger would. He’s not, like, ‘how many fills can I impress people with!’ I always like drummers who have at least one other string to their musical bow, even though sometimes they’re not as technically gifted as people who practice drums all day.

HAPPY: I know a little bit about Kevin’s influences with his drumming and stuff but what were yours? Who inspired you to pick up the sticks?

JAY: When I first started playing drums my favourite band was the Red Hot Chilli Peppers. I’d play along to Blood Sugar Sex Magik and Chad Smith. Then by about 13, it was kind of that retro rock revival, the early 2000s. I liked Jet and The Hives and The Vines and The White Stripes. And then, by about 15, it was just the originals. You know, Led Zeppelin, John Bonham, and Jimi Hendrix. That was my trajectory.

HAPPY: And you James?

JAMES: I’m less rock. The most rock I got when I was a kid was probably No Doubt.

JAY: You were more into hip hop…

JAMES: Yeah. But I feel like I’m doing my rock bit now.

JAMES: As a 30-year-old I’m doing my rock apprenticeship. JAY: That’s the other thing. We don’t really see [POND] as a rock band, even though it very clearly is. But it helps if you have someone who is playing drums who is approaching it from a different way. We understand that [POND] is full-blown arena rock, but you know!

HAPPY: Well Nick makes no bones about being a huge Madonna fan. You guys even covered one of her songs for Like A Version…

JAY: I think when you’ve done your apprenticeship in something for so long… I mean when Nick and I first met, I was into Led Zeppelin and things like that, but he was into like, Jethro Tull and Toad and all these sort of like…

JAY: Yeah, and that’s all we listened to for like five years. So now you can obviously hear that in all the bands. But none of us put it on. We don’t need to, you know what I mean? I have no need to listen to like, The White Album again. I mean I love it! But it’s imprinted in my DNA.

HAPPY: It’s funny you’ve mentioned The White Album. I have this burning curiosity – and I don’t know why – about what each of your favourite Beatles records are. I know Kevin has said in an interview that his favourite album is Abbey Road…

JAY: Well you know what’s even funny about that? I’m pretty sure that’s his favourite because he likes one song on it, I Want You (She’s So Heavy). He likes the Beatles, but he never smashed them, even when we lived together. I’ve realised he’s more of a one-off song kind of dude. He scoffed at me the other day when he said The White Album was my favourite album.

JAMES: That album has got some bangers!

JAY: He laughed at me! He was like, “Well, you like all the whacky ones, don’t you?”

JAMES: Yeah, the weird ones.

JAY: The real funky ones. But yeah, Abbey Road is the one that has the most pristine production. JAY: For years I actually hated – the one we all hated – was Hobo Rocket. (Laughs) Not least the title!

JAMES: Was that the live one?

JAY: Sort of. It’s like, really short and weird, kind of Butthole Surfers, Black Sabbath stuff. And we just thought it was really embarrassing. And now, I don’t know. For some reason, just because it’s so rogue, it’s kind of my favourite. Well, not my favourite but it’s the one I find the most amusing! My favourite in terms of… I find it hard to separate The Weather and the new one Tasmania.

HAPPY: They have a certain similarity.

JAY: The Weather was the first time – we were still referencing heaps of old music, but it sounded like us, you know? You couldn’t draw all the dots between the influences as much. And the new one again, that’s why we really like it, but other people might like it less. It sounds even more just like POND. You’re not like, ‘Oh there’s a bit of this band or that artist! We can hear what they’ve done.’ It’s more idiosyncratic and less referential.

HAPPY: Are you working on anything interesting on the POND front at the moment?

JAY: I think for the next one the aim is to record in a very different way. We’ve done three in a row now where we record layers. We write the songs first and then we record each instrument pretty much one at a time, occasionally a couple of bits together. For this next one our idea is just to record, just jam, which I guess we haven’t done in a long time. Just record noise for like five days, thirty hours of just rubbish and then sift through and kind of sample it and make stuff out of the rubbish. I think it’ll be a lot crustier than the last couple, a different energy. I think we might produce it ourselves. Just to change it up. We’ve done a few with Kev now – and he’s the best! But it’s good to just challenge yourself you know? Try different things. 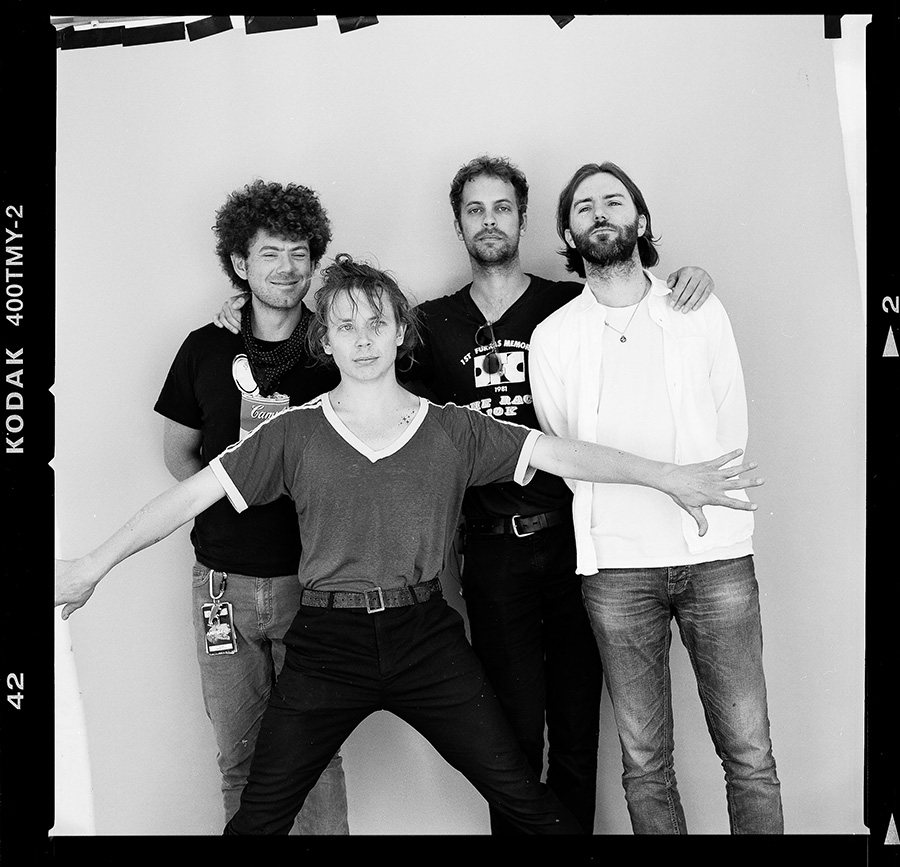 JAY: I like the second one. But I’m biased because that’s the one I contributed to! But I love all of them.

JAY: I am A) sworn to secrecy. But B) I don’t know anyway. No one tells me! The thing is, no one tells us anything because of moments like this. Which is fair enough!

HAPPY: They know you can’t be trusted?

JAY: What about some dating advice Jim?

JAY: I’ve actually only ever had one girlfriend. I’ve never been broken off and I’ve never broken up with anyone. I don’t know if that means I’m not qualified or the guy to be asking!

JAMES: I don’t think I’m qualified to give dating advice either.

JAMES: It could apply for both.

JAY: That’s fairly logical to me. I feel like there’s a lot of people out there that are with someone who they dislike more than 50 percent of the time. It seems like a stupid thing to say but there you go, dating advice from Jay Watson!