Meet the two-schlonged man who has rooted over 1000 people and needs to jack off every day, for medical reasons obviously.

When Thomas Jefferson penned the term “all men are created equal”, I’m sure he wasn’t expecting this. Meet the man with two penises who isn’t afraid to use the two dicks that were bestowed on him, (it goes without saying that there’s an NSFW tag on this one).

If you’ve ever found yourself wondering can a man have a double penis the answer is yes. Diphallia affects about one in 5.5 million American men and is caused by irregular homeobox gene expression during the 4th week of pregnancy. The end result? Two penises of course! And diphallia disorder images online will demonstrate this.

Going by the name of DoubleDickDude on Twitter, this bloke certainly hasn’t been shy about the two penis situation going on between his legs. While the condition is often accompanied by other congenital conditions, often causing insuperable defects, DoubleDickDude has used his fully functional fourth-leg to its full capacity. That’s right, the two dicked man called double dick dude has made peace with his 2 dicks and enjoys all kinds of sexcapades!

Although the identity of the huy with two dicks is relatively unknown, the man with 2 penises called @diphallicdude has amassed quite the presence on social media; including over 73,000 Twitter followers and one of the most popular Ask Me Anything sessions that Reddit has ever seen. DoubleDickDude shared some interesting tidbits during this session, including;

“My prostate gets inflamed if I don’t ejaculate enough. I’m probably the only guy with a legit reason to orgasm at least once every day or two days.”

When diphallic dude was asked if he has a favourite penis, he also replied, “Yes, the right one. The left one has a grudge against me for it too.” He wasn’t shy about his double dicking bedroom adventures either, announcing that he has had sex with over 1000 people and counting. What a double dick legend!

Unexpectedly, the very person who helped reveal me to the world on their Tumblr blog before my Reddit AMA submitted some artwork to me after my call for comic book artists. I was impressed & gave them 24hrs to create something 100% original for me. What does everyone think? pic.twitter.com/mEDSep7Ugq

DoubleDickDude has gone on to release a Kindle #1 best-selling book, Double Header: My Life with Two Penises, that delves into how diphallia has impacted his life. In an interview with BBC Newsbeat, he discussed growing up with his condition, with his parents asking him to keep it private. However, instead of fear of being ridiculed, a young DoubleDickDude had a different mindset.

“I didn’t want other guys to be jealous or feel bad that they didn’t have two. It was never put into my head they might hate me because I had two, or they might think I was weird,” he remembered.

If you’ve never seen a diphallic dude before, you’re about to see his two man dicks now. Now, the moment we know you’ve only been waiting for, and the only reason you clicked onto this article. The internet’s most famous man with 2 dicks. Here he is in all his glory, with his 2 very real dicks:

There’s a fair amount of reddit penis out there, but nothing as legendary as the 2 dicked man of course. If you find two penises to be a turn on, you may find his reddit orgasm inducing. For those who haven’t yet graced the hallowed halls of Double Dick Dude’s Reddit, you’re in for a treat. His 2014 Reddit AMA is easily the most successful in the platform’s history and it continues to deliver the goods, time and time again. Lo and behold, the first double dicked penis reddit has ever seen. Here’s a few of our favourite comments.

#6 – Bit too much information 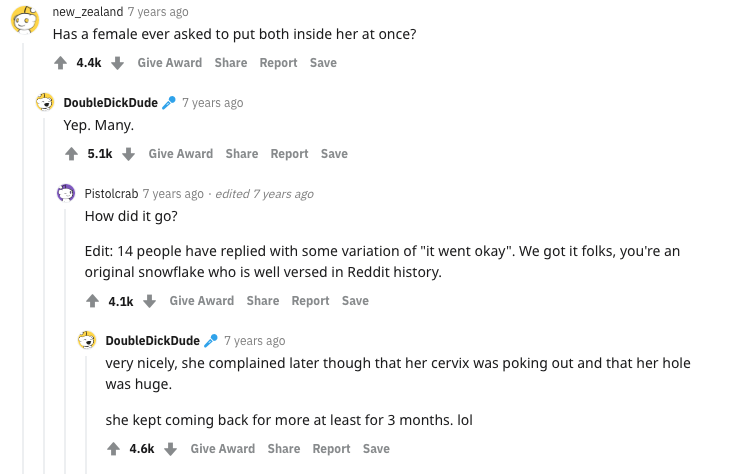 #1 – Favouritism is a dangerous game