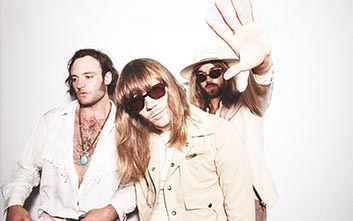 Northern Beaches three-piece The Ruminaters have made a triumphant return with their hazy new single, Boys Off Work. The trio have managed to sum up our back to work blues in a succinct three minutes, leaving us questioning whether returning to the mind numbing 9-5 is really worth it.

The single comes off the back of two stellar releases, I Wanna Fight and a true-blue cover of Hot Chocolate’s You Sexy Thing. Both proved that the boys can produce hard and fast rock while not taking themselves too seriously – a notion which has been carried over into the latest. While a life on the road might not be plausible for everyone, Boys Off Work provides us with a few brief minutes of what it’s like to live the dream.

Lead singer Pencil, whose thrash vocals lead the pack, describes how the song came about: “We wrote Boys Off Work on tour, sitting by a pool talking about how good it’s going to be quitting our jobs and being on tour forever. If you don’t like your job or boss or making money, this song’s for you”.

Since their formation in 2014, the band have finally made the push to make music full time. It’s undoubtedly a bold move, but what Boys Off Work primarily encapsulates is the pure excitement of going all in and pursuing your goals with your best mates.

Having spent most of 2017 working in London’s RAK Studios (David Bowie, Pink Floyd, Michael Jackson), The Ruminaters’ are set to release their highly anticipated sophomore album Welcome to SUN 91 early this year.

If this first single is anything to go by, this album is going to be a collection of purely hedonistic hits. The perfect soundtrack to write up your two weeks notice to.

Boys Off Work will be released digitally Friday February 2nd.

If you want to help the boys celebrate the milestone, you can catch them supporting American indie rockers Grouplove on their upcoming Australian tour, or at one of their regional headline shows.

Details below. Grab your tickets here.