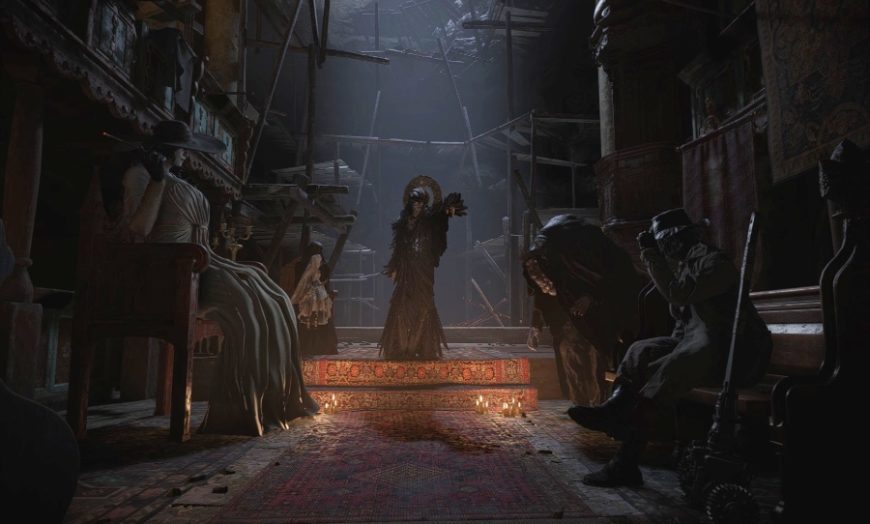 Resident Evil Village will leave you exhausted, breathless, bruised, and broken before its relatively short playtime is up. It’s also bloody brilliant.

Depending on your tolerance for stress and anxiety, Resident Evil Village will fall somewhere between a near masterpiece and trash. For this writer, however, and I’m guessing the vast majority of horror junkies and series fans, I could barely wipe the smile off my face… to the point that I started to wonder if perhaps I myself had become part of the titular village.

The Resident Evil series has a long history of morphing into whatever monster the current times call for. In the case of Resident Evil Village, it plays like a bit of a greatest hits. There are vampires and werewolves, haunted dolls, and terrible swamp beasts, with a little bit of “the evils of man” thrown in to tie it all together with the series’ Umbrella Corporation uber-narrative.

But don’t let this wide-reaching approach fool you, Resident Evil Village is treading its own path. While the developers have undoubtedly tried to pull together the best gameplay mechanics from the series’ most successful past iterations, there is still a great deal of ambition on display.

Never before has a Resident Evil game so openly courted the supernatural, and despite my initial reservations, I found myself on its level in no time. The cursed doll house, for example, had me cynically rolling my eyes as I sauntered up to its cliched front door.

What followed in its basement was a different matter altogether, and without going into too much detail, left me traumatised well after the initial threat had passed.

That sequence of gameplay left me reminiscing about the sheer terror I felt playing Resident Evil 7: Biohazard. That game, which I probably recall a great deal more fondly now than while I was playing it, was almost too much.

It was scary to the point that I put off playing it out of fear. And if you find yourself avoiding a game, for any reason, you might need to ask whether it’s truly successful, at least in terms of what you personally want from a video game.

The good news is that Resident Evil Village, while it most certainly has its moments, scales back the horror to a level that more players will find palatable. So even if you found Resident Evil 7 Biohazard too much, don’t immediately discount the latest entry in Capcom’s iconic survival horror series.

Part of the reason for this is the increased focus on action. There are some exhilarating set pieces, and passages of combat, that despite being disturbing, actually relieve tension. Whether this is intentional is up for debate, but if anything it made me appreciate the tense moments all the more.

There is also a wacky, off-the-wall sense of humour that permeates the game’s world. The cast of characters are larger than life – I’m looking at you Lady Dimitrescu, although the merchant of massive, The Duke, deserves an honourable mention.

These characters, despite being rather clunkily written at times, posses a remarkable amount of charm – with only a few unfortunate exceptions.

This interesting and diverse motley crew is an apt analogy for what ultimately makes Resident Evil Village a success. There is, quite simply, something here for every kind of horror fan imaginable. My hunch is that, while Resident Evil Village is unlikely to be many fans favourite game in the series, it will come in second more than any other. And that is something worth applauding. The differences between 'Resident Evil: Welcome to Raccoon City' and the original movies