Rupert Neve has arguably played a greater role than anyone else in the evolution of pro audio gear. Here are his 7 most influential creations.

Rupert Neve’s passing made the audio community reflect upon the greatness of this pioneer. Rupert was a hard-working family man who designed and built iconic audio gear and continued to design practical and exciting equipment all the way up until his passing at age 94 on February 12, 2021.

Rupert Neve worked as an audio designer and gained manufacturing experience for multiple companies in the 1950s before designing his first mixer for Desmond Leslie, a professional composer, in the 1960s. Ever since, his name has been synonymous with uncompromised quality and pursuit of tone. Read on to discover his most iconic pieces. Probably Rupert Neve’s most famous product — and design — is the 1073 preamp. Whilst the 1073 preamp was preceded by a 1066 preamp, it was the 1073 that became the classic with its EQ curves and Marinair transformer.

The 1073 has been cloned and modelled digitally so many times it’s not funny! But there is just something about the 1073 sound that ‘sounds like a record’. If you want to pinpoint it, Rupert has confessed it’s about the input and output transformers. Stepping away from pro audio, Rupert Neve and his company ARN consultants were commissioned by Taylor Guitars in the early 2000s to develop the K3 Preamp and EQ System and then the K4 Equaliser and Preamp.

The K4 was designed to be used in conjunction with Taylor’s ES (Expression System). The K4 is an external unit that has; low and high shelf filters (125Hz low shelf and 8kHz high shelf), and a single, fully-parametric 10dB cut/boost mid-frequency band from 80 to 800Hz, effects loops, tuner out, and a headphone amplifier section. Neve 80-series console looms large in the history of the recording studio. They were packed with 1073, 1081 or 1084 preamps and became the centrepiece in the world’s largest and greatest recording studios. Dave Grohl even made a film called Sound City about the 8028 Console in the Sound City Studios and all the timeless music that was recorded there.

One famous 8048 console, with 32 channels of 1081 preamps (a newer version of the 1073 with a more comprehensive EQ) was exhibited at AES (Audio Engineering Society) in Denmark in 1974 and then assigned to Studio Clarens in Paris.

Another 8048 desk found a home in Mountain Studios in Switzerland which saw it being used to record Queen, Iggy Pop, AC/DC, and David Bowie, to name a few.

Many are still currently in use in the best studios in the world, like Blackbird Studios in Nashville, Electric Lady in New York, and Eastwest Studios in Los Angeles. It’s worth noting that George Martin had an 8078 custom-made and renamed the A4792 in 1978 for AIR studios in Montserrat which tracked Dire Straits, Elton John, and The Police.

In 1985 Sir George Martin requested that Rupert Neve build 16 no-compromise mic pre and EQ for the console at Air Studios Montserrat to add to the aforementioned Neve A4792 Console. Born was the Focusrite ISA 110 Mic Pre and EQ Module.

Due to the use of the highest quality materials and digital control (which was outside of Rupert’s expertise), the company liquidated in 1989 but was salvaged by Phil Dudderidge. Only 10 Focusrite consoles were made and are a mythical item in the audio world.

Designed in 1969, this discrete, Class A design and transformer-coupled circuit compressor/limiter became a standard unit in the 80-series consoles. The 2254 was actually designed by David Rees (who is Phoenix Audio’s lead designer) alongside Rupert Neve. The 2254 has simple parameters and has been described as having a warm and creamy tone, which people suggest are good for parallel drum compression.

There are 4 major revisions of the 2254. The original 2254, the 2254A, the 2254E and the new replica, the 2254R. There have been a few plugin models of this compressor if you cannot find the real thing and it’s well worth diving in and experimenting with so you can understand why those who use it love it. 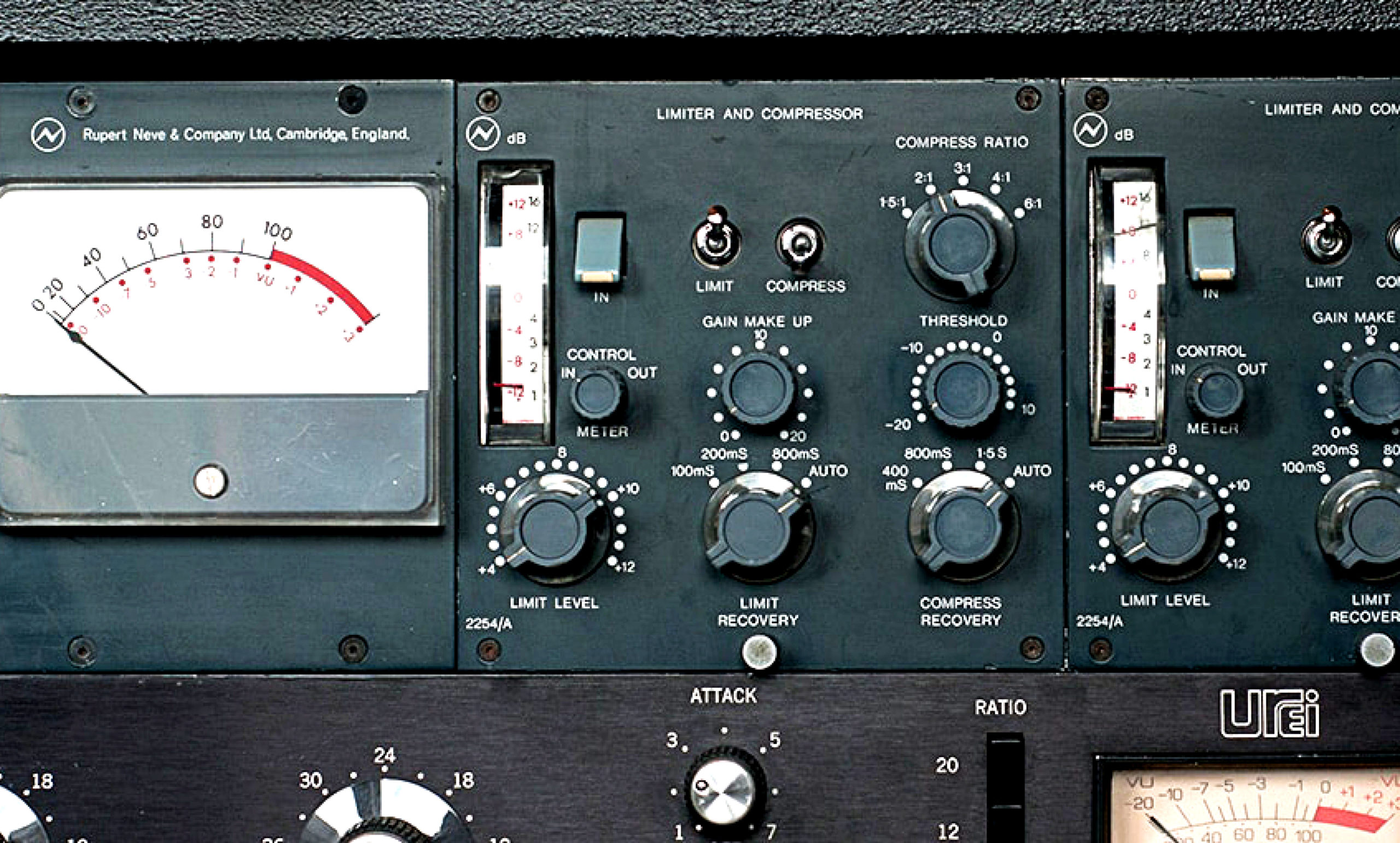 The first moving fader automation system was NECAM (meaning Neve Computer Assisted Mixdown) of 1976 which came from Rupert’s request from studio owners for their ‘dream’ items. When George Martin tested the new system at Neve he was reported as saying “How soon can I have one?”.

NECAM was first used in a Neve 16/4 console and used a toothed belt to carry the motion from the motor to the fader. Whilst in today’s standards this might seem like a dated and clunky technology, Neve was the first to implement it, ushering in a new era of automation in mixing. Whilst the 1073 preamp holds the flame of glory, whispers of the 1084’s superiority can be heard around audio circles, as it is a class A preamp with EQ options to go beyond the 1073.  Firstly, Rupert took the 12kHz shelf and made the high frequency switchable between 10, 12 and 16 kHz along with narrow or wide Q setting. Secondly, Neve added a low EQ control with four frequencies of 35Hz, 60Hz, 110Hz and 220Hz.

The 1084 was shortly released after the 1073 and was regarded as the ‘upsell’ model and was originally fitted into a custom-built A1085 console for Whitney Studios in Los Angeles.