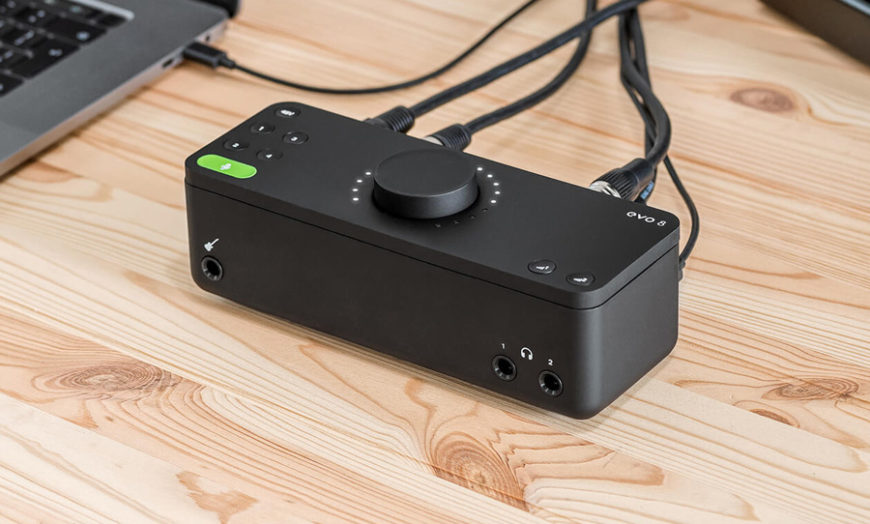 Audient’s EVO 8 offers up a new level of flexibility for the home studio. More inputs, outputs, and intuitive workflow — all at unbeatable value.

Audient is no stranger to the professional studio, with many of their consoles adorning recording spaces in its native England and abroad. With the recently released EVO 4, they signalled their intent to enter the home studio. With the newly minted EVO 8, they’ve consolidated this position and expanded on it.

While it would take a miracle to squeeze a whole band into the EVO 8, it offers ample flexibility. With more analog inputs and outputs, provision for a separate artist mix, and low latency recording at up to 96 kHz — it’s a boon for the solo producer, at home or on the road. Over the last few decades, Audient has forged a reputation for robust build quality and cleanliness of sound. Offering up 58 dB of gain, there’s plenty of the company’s trademark headroom — for a multitude of sound sources and microphones — on the EVO 8. So even if you’re dusting off an old ribbon microphone for a recording, you won’t be drowning in noise as you crank up one of the four preamps.

The rear of the EVO 8 presents four XLR combi jack inputs. This means you can plug in a standard XLR microphone, or a jack plug from a line-level device like a synth or a drum machine. Also on the rear are four outputs for potentially plugging in two pairs of studio monitors, reamping lines, monitor sends and more.

On the front resides two headphone outputs, which mute the corresponding rear outputs automatically when plugged in. There’s also a Hi-Z input, which will take over channel one when you plug in a guitar or bass. The DI itself is no slouch, which is fitted with a JFET transistor and imparts some tube-like warmth and character when you’re plugging into your favourite amp simulator.

Key to getting the most of the EVO 8 is understanding the EVO Mixer software. It’s easy to roll the eyes at the prospect of getting to grips with yet another window on an already packed computer screen, so thankfully, the software component of the EVO is about as user-friendly as it gets.

When you open the box, you’ll find a quick start guide that directs you plug in the EVO 8 and download drivers and firmware if needed. Once you’ve progressed through this painless process, you’re presented with the uncluttered mixer window, which gives you faders, gain and phantom power for each of the four input channels. There are stereo faders for outputs 1 and 2; 3 and 4 — both of which can be folded down into mono. Also along for the ride is the brilliant ‘Loop-Back’ function, which allows you to record computer audio — for example, from a remote contributor to a podcast — onto a separate DAW channel. It really is an ingenious inclusion which makes the EVO 8 an even better bang-for-buck proposition.

The Mixer is also where you can find Artist Mix mode. The extra outputs that come with the EVO 8 make it more feasible to create dedicated mixes for talent. With Artist Mix, you can set up low latency foldback for musicians, while monitoring through your DAW, using a whole different set of processors.

Overall, the EVO 8 package is nigh on irresistible. It’s not a miracle — it is made from plastic after all, unlike the aluminium that’s favoured by more expensive competitors. The sparseness of its buttons and master knob and it’s functional labelling doesn’t exude ‘pro studio’.

It is clear, however, that Audient has applied a lot of imagination and foresight to the creation of the EVO 8. The simplicity of its functionality — not to mention ‘Smart Gain’, which will automatically set an appropriate input level after a quick audition — might not be for all, but for many, it will be a godsend. The big brother of the EVO 4 has enough options to accommodate the growing studio, with a quality of sound that won’t let anyone down.