A woman has returned some ancient artefacts stolen from the Roman city of Pompeii after she supposedly discovered they were cursed.

If you’ve ever stolen something, you may well have felt some guilt about it (yes, I’m talking to you scanning those multiple avocados and only pressing one). For one Canadian woman, this guilt was so intense that it lead her to think that the items in question were cursed.

Nicole from Canada believes that the holiday souvenirs she took in 2005 were the cause of her numerous misfortunes, including going through two bouts of breast cancer and her family suffering financial hardship. It’s pretty unfortunate, and surely if anyone was going to curse you, it would be the countless bodies forever preserved in Pompeii, who were literally turned to ash by lava spewing from Mount Vesuvius in AD79.

Pompeii has a UNESCO world heritage listing; however, this hasn’t stopped hundreds of keen tourists from plundering the place. Many stolen items have since been returned, and their accompanying apology notes can be seen alongside them on display.

Nicole decided that she would take two ancient white mosaic tiles, a piece of a ceramic wall, and fragments of an amphora case; however, this year she returned the items along with an apology letter to a travel agent in Pompeii, in what is officially the most Canada thing I’ve ever heard. The owner of the travel agency then took her stolen artefacts to the local police.

In her letter addressing the Pompeii theft, Nicole said that she “was young and stupid. I wanted to have a piece of history that no one could have”. You can read Nicole’s letter for yourself below. 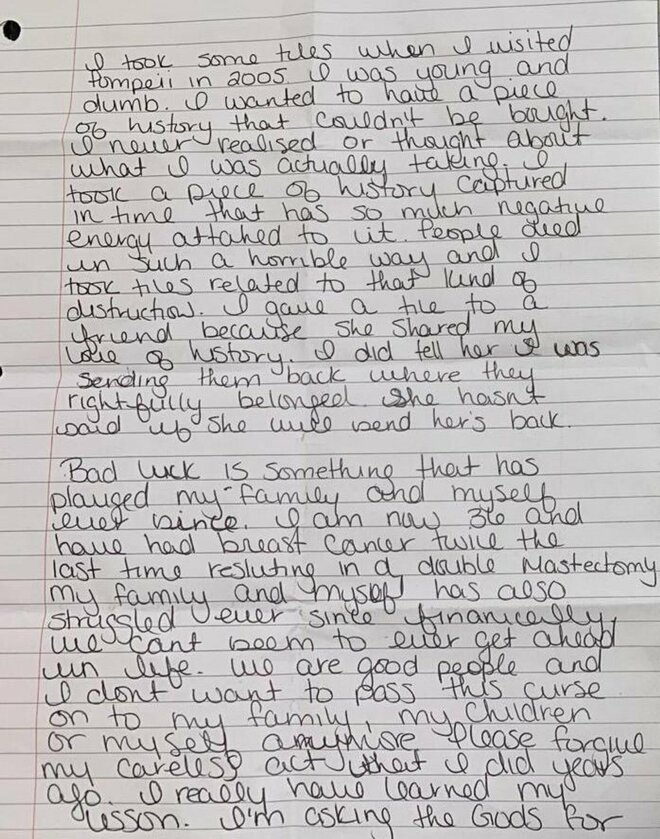 Maybe after this gesture 2020 can stop ruining everything, please?