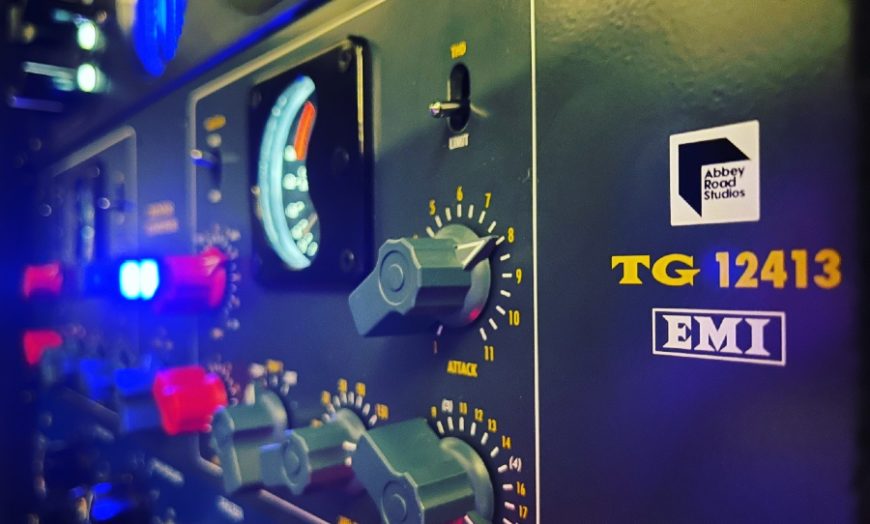 Chandler Limited authentically recreates some of the most revered equipment from EMI Abbey Road, perfecting them for the modern studio.

The equipment from EMI Abbey Road Studios was the pinnacle of recording technology at the time. This gear would become immortalised on records by the likes of The Beatles, and Pink Floyd. Inspired by this fertile period, Chandler Limited has come out with some of the most faithful outboard units ready to plug and play.

They became highly sought after for their hand-wired Neve-style compressors, implementing original wiring techniques and transformers. Painstakingly developed, have been repackaged to be more suited in today’s recording and mixing studios. For example, they took the EMI TG12345 console, which was the studio’s centre, and broke it down into usable components. Let’s take a closer look at some of Chandler’s greatest hits. The Chandler Limited TG2 is a recreation of the microphone pre in the EMI Abbey Road gear in the ’60s and ’70s. It’s been developed from the original circuit board designs provided by EMI. The tone can be described as creamy, smooth, and a surprisingly open and clear top end. Some users said it has Neve warmth and punch, but a distinctly different top end. It has its own particular distortion character when pushed.

Key features include a 75dB gain control in 5dB increments, and an output control, that acts as a console fader. It’s placed in between the gain control and the output and lets you run the front end hotter without distorting your recorder. An impedance switch also allows you to change between 500 and 1200 ohms to match a variety of microphones. It also features a 180-degree phase button, phantom power, a switch to change its DI position. Comes in both 1 RU rack mount and 500 series units.

The Curve Bender is based on the EQ section of the legendary EMI Abbey Road TG12345 console. It was designed by Wade Goeke of Chandler Limited with help of engineer Peter Cobbin who has worked on numerous Beatles remixes and was a recent head engineer at Abbey Road. The Curve Bender takes the original design of the EQ sections and added desirable improvements for the modern studio.

It comes with four bands based on the original console, but instead of the original nine-position switch, there’s a 51-position control. Interestingly, there’s a ‘multiply’ switch that increases the amount boosted/cut by 15dB, this also changes the Q as well as bypassing if in the middle position. The bands are named bass, presence 1, presence 2, and high.

Now we come to the recreation of the TG12413 Limiter used in custom-made EMI Abbey Road consoles. They were never available for public purchase and were only found in studios owned by EMI. Rare and elusive, they were inspired to be like the Fairchild 660/670 but became known for their own sound. It’s not just a limiter; it also acts as a compressor with a variety of functions.

It comes with a stereo/dual mono switch and ‘hold’ knob which acts as an input gain or threshold. A 21-position output control in 1dB increments giving up to +/-10dB of make-up gain is also present, as well as a 6-position attack/release control, and a THD switch — which bypasses the compressor/limiter function but leaves the juicy circuits in the signal path. All in all, it’s a powerful harmonic distortion generator capable of up to 2% THD.

All this EMI Abbey Road inspired gear is great, however, Chandler Limited has proven capable of more. The Germanium Preamp is their homage to a series of vintage gear that everyone loves. The incredible sounds of Neve’s 1073, the EMI TG12345 console, Telefunken, and Fairchild equipment. Germanium transistors undoubtedly have defined a generation of gear and therefore, the sound of a generation of music.

The sound of the Germanium Preamp sounds like the old classics — smooth, silky, and all that jazz — without the drag of original designs and techniques. Chandler has created its own vintage classic, running on +40 volt power and featuring an all-class-A transformer balanced circuit. Custom wound transformers based on vintage St Ives and Gardner’s transformers are present, as well as a ‘thick’ switch for more low end.

It features Chandler’s .47 mic amplifier circuit coupled to a custom platinum membrane — the shortest way possible to connect two of the most crucial points of the signal chain. There are nine gain selections from +4 to +33 in the ‘norm’ position, an extended range, and more punch in the ‘drive’ position. Cardioid and omnidirectional patterns can be selected, alongside a 10dB pad, and phase reverse. Can also be used with an external preamp.

Chandler Limited has forged a glorious line of electronics based on a small part of the world whose influence is limitless. They have brought back some of the golden treasures of the ’60s in ways that are enhancements to the modern studio. Chandler Limited electronics are humble and accurate and they don’t need hype, or flashy marketing: the music of decades past has done that for them.