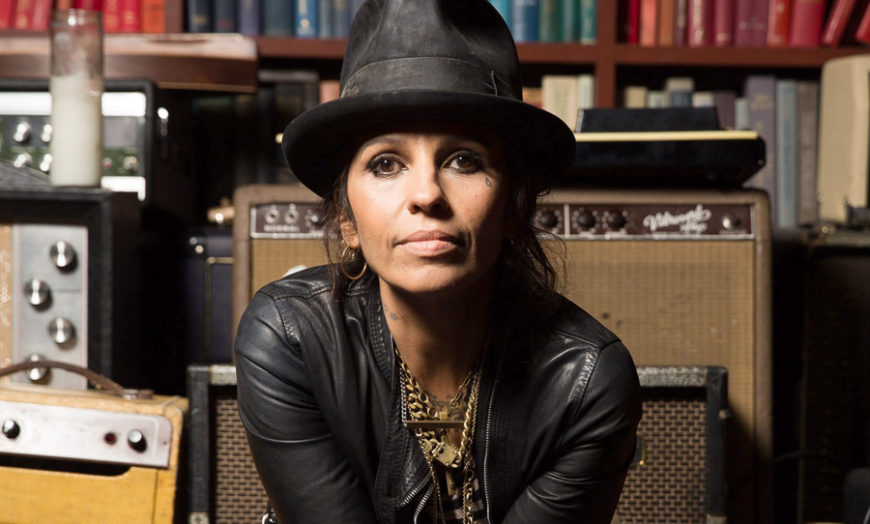 You’ve heard Linda Perry belt out “What’s going on?” in the 4 Non Blondes worldwide hit What’s Up? But she’s found even more success behind the console.

When you think of a successful woman in the music industry, who does your mind go to? Is it Taylor Swift? Lizzo? Billie Eilish? Or is it managers like Kei Henderson, producers like Ester Dean or engineers like Sylvia Massy? How about a woman who does all three?

Linda Perry is the genius lyricist, engineer and producer behind the voices of artists like P!nk, Christina Aguilera, Alicia Keys, Gwen Stefani, Courtney Love, and Adele, just to name a few. While she may have had her time in the spotlight as the lead singer of 4 Non Blondes, Perry reminds us that success for women in the music industry doesn’t just come in the form of popstars. She wants to change the narrative, and revere female voices behind the scenes just as much as those that are on stage.

On stage with 4 Non Blondes

Perry’s arrival in San Francisco — in 1986, aged 21 — marks the beginning of her career in music, though not before she waited tables, worked in coat-check and served at a pizzeria. Perry lived in a small, windowless room, and filled her free time by playing the guitar on city streets and auditioning for all-girl cover bands. It was your typical rags to riches fairytale.

It wasn’t until the early 1990s that Perry was recruited into the alternative rock band 4 Non Blondes, by founder Christa Hillhouse. Their debut album Bigger, Better, Faster, More! was released in October 1992, and featured Perry as the lead singer. Her rich, riveting low register drove the album and quickly saw Perry become the star of the band. In fact, it was her talent — as a songwriter, singer and producer — that spawned the hit single What’s Up?, which went on to become the biggest hit in the world for the time. It spent 59 weeks on the Billboard 200 and sold 1.5 million copies between 1992 and 1994. It’s a classic that everyone knows.

Perry shared the story behind the creation of What’s Up? on an episode of q on CBC. She says the song was originally produced by David Tickle and strayed so far from her original vision, she scratched their work and insisted she would produce the song herself. With no money and only one reel of tape, Perry took her band back to San Francisco and recorded, mixed and mastered the song herself in two days. At this point she had no engineering experience, she just tailored the sound to “what felt right.” It is this version of the song that dominated the music charts for 59 weeks.

This was the start of Perry valuing her own vision. She took her sound into her own hands.

The next couple of years was filled with solo appearances and collaboration with other artists. 4 Non Blondes rode on the success of Bigger but struggled to conceive an album to follow it. In her q on CBC episode, Perry admitted she left the band while it was still successful, which was a risky move, but she couldn’t deal with the “fluffy, polished, bullshit sound” the band kept trying to recreate. So begun, her solo career.

Perry released her first solo album In Flight in 1996. It was mellow, moody and dark — a sound far removed from that of 4 Non Blondes. Perry remarks it is her favourite and most authentic album and that she listens to it more in a week than she’s ever listened to Bigger, Better, Faster, More!. While the album received positive reviews, it did not sell particularly well. Instead, Perry sought to lend her considerable melodic sensibilities to a host of artists.

This decision launched singers from P!nk to Christina Aguilera into the stratosphere of superstardom. Perry didn’t just strive for commercial success, she looked for authenticity — which had been at the core of her work ever since she transformed What’s Up?. Any producer can follow the trends of the Top 40 songs that saturate the radio. Instead, Perry looks for real emotion and a unique sound that suits the artist. She admits that she’s picky and won’t work with just anyone even if they are more likely to lead to commercial success.

No song is more emblematic of this than Beautiful. Perry originally intended for the song to be her own comeback hit, often using to close her own shows when she was touring in 2001. However, Perry found she couldn’t wholly connect with the songs lyrics. It wasn’t until she met Aguilera, that she knew the song belonged to her.

Perry admits, in an interview with Rolling Stone, that it wasn’t Aguilera’s vocal talents that won her Beautiful. Rather it was the moment before Aguilera opened the song; standing in the studio, lyrics in hand, when she whispered “don’t look at me” in a shaky voice to some friends she had brought along. It was there that Perry saw a unique vulnerability that she knew was going to bring the song to life. Perry recalls thinking: “Oh, she’s insecure. she’s one of those beautiful people who’s got everything but is super insecure. Okay, this song is hers.”

Perry didn’t even let Aguilera re-record the song after the first take. She said in the interview “This [original] vocal is perfect because it’s flawed. You gotta understand that flaws are great. This is a beautiful song because no one has ever heard you like this.” And she was right. Aguilera’s “don’t look at me” stays in the opening of the song, as a sign of its authenticity.

Perry found herself at the heart of the early 2000s pop scene — which is ironic, considering 4 Non Blondes was supposed to encompass an ‘anti-California stereotype’ persona. But the combination of her curiosity and her intuitive producing skills saw her creating many memorable hits, that you definitely would’ve put on your Blackberry at the time.

She wrote P!nk’s breakout single Get The Party Started in a day just by playing around with some new hardware. She suggested using different sounding microphones to create six unique ‘characters’ for Gwen Stefani’s What You Waiting For. Perry even wrote Brave New World, which convinced Rivers Cuomo to continue being a part of Weezer.

Now, as the manager of her own record label We Are Here, Perry is a lot more selective about the sound she creates and the artists she manages. In 2018 she worked with Dolly Parton to produce an all-string version of Jolene. And yes, while I know that might feel like drawing a moustache on the Mona Lisa, the results are captivating.

Living in the now

Linda Perry has cemented herself in the music world. Her credits as a music producer, manager, songwriter and engineer have won her a reality TV show called Make or Break: The Linda Perry Project, which is available to watch on a number of streaming platforms. Through this show and in her record label, Perry continues to work she always has: with artists she has a unique connection with, who aren’t afraid to “break down and open up” in their music.

Perry commented on her experience as a gay woman in the music industry in a 2014 interview Kelly McCartney. While she has been subject to sexism and homophobia over her career, she personally sees herself as having ‘blinders’ to negative attitudes.

“If somebody told me I couldn’t walk in here because I’m gay and a woman, I would say ‘fuck you’ and I would walk in any way.”

However, Perry isn’t naive. She was the first woman nominated at the Grammys for Producer of the Year in fifteen years, and understands it’s impossible to believe no other female producers shouldn’t have been considered for the award. Her advice to female music makers? Get out there and do it. In her q on CBC episode, she uses an analogy: if you wear a red shirt, suddenly you notice every person also wearing red. If we are so used to seeing men in production roles, no wonder we haven’t noticed all the women working behind the scenes just as hard.

Perry has found herself to be an avid advocate for music and industry rights and creative freedom. Her history and experience in the music world is proof of that. In 2019, Perry attended GRAMMYs on the Hill, which is an annual opportunity for the music community to meet with Congress on Capitol Hill to discuss policies and advocate for issues that affect the music world.

In fact, Perry played an instrumental role in ensuring the Music Modernisation Act crossed the finish line to be signed into law. This act aimed to modernise copyright-related issues for music and audio recording, which have been outdated since the rise of new technology such as digital streaming services.

Linda Perry may not be fronting a band or selling out world tours, but she is creating an incredible legacy and fostering the creation of interesting, authentic music that we will celebrate for years to come.

Find out more about Linda Perry’s label We Are Hear.