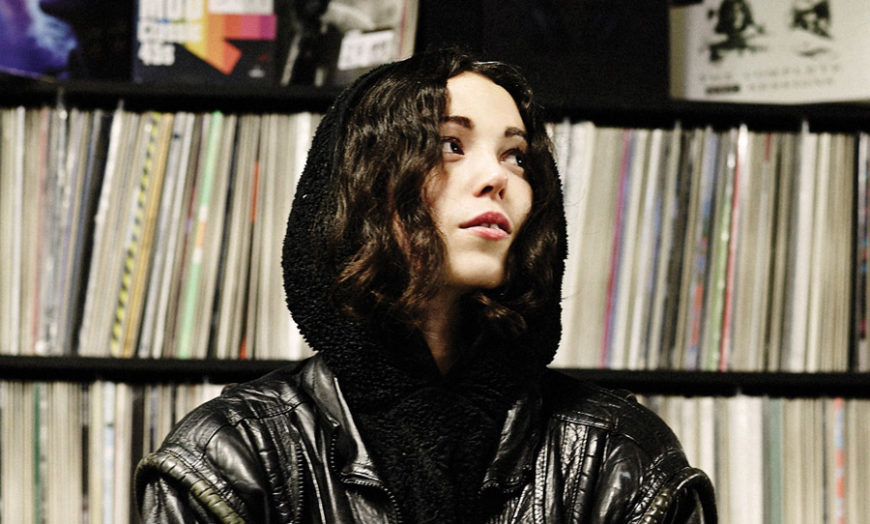 Ahead of the release of Inner Song, Kelly Lee Owens lets us know how she created a sense of urgency and spaciousness in her new record.

Since relocating from her native Wales to London, Kelly Lee Owens has built a formidable body of work. Her music inhabits the worlds of dream pop and techno — seemingly disparate environments that are expertly linked on her new record, Inner Song.

Drawing inspiration from the dramatic landscapes of her home, Inner Song conveys the urgency of our current climate crisis, while giving listeners the space to contemplate their own world. Owens took five to talk through her process, her love of organic sampling and the balance between earthly and ethereal textures. ENMORE AUDIO: Paint us a picture of your studio space. What do you love about it?

KELLY LEE OWENS: Well, I actually don’t have a permanent studio space. I’m lucky enough to use Daniel Avery’s studio. I recorded the first album there and it was the same for the writing of the music for the second. He’s been gifted quite a lot of good synths, which is why he’s like “just come and use mine.” He’s often touring, so the space is free for much of the time.

He has a real 808, an SH-101 and on this album, there was the KORG Mono/Poly which was James Greenwood’s. It’s not portable, it’s the least portable thing you can imagine, but it’s a beautiful synth that I’ve always worked with. The other day, I used [Jon] Hopkins’ studio for a remix, so I’m not a synth collector, as such.

I think it’s about how you use stuff. I have a lot of my own samples and obviously plugins as well. I use the Soundtoys Crystallizer quite a lot actually. The Crystallizer’s amazing because it can be quite random and sparkly, but also dark at the same time and that balance of the light and dark in my production is always something that I’m after. I’m lucky that I have some great friends who have great synths.

ENMORE AUDIO: They’re the best kind of friends to have!

ENMORE AUDIO: Speaking of ‘space’ it’s the word that keeps coming to mind when listening to Inner Song. Is that something that you develop consciously or unconsciously?

KELLY LEE OWENS: I think space is really important. I’ve always made it a priority to have enough of it in my music. Having enough space within something gives the listener an opportunity to be reflective. It’s somehow meditative and that’s really important in everything  I do, even if it’s techno banger or whatever. A lot of the time, people overfill stuff and it’s a real pet hate of mine.

I mean, look, it can be done well and again I’m gonna mention Hopkins; he’s an amazing example. He can have 150 stems – and he does (laughs) – of what I’d call sound design. Having the stems for Luminous Beings, it just blew my mind. The respect I had for him increased tenfold. He did it with such purpose and precision.

I still have blends of certain sounds. For example, instead of just one layer of kick, I might have two, or sometimes three, but I avoid filling space for the sake of it. I’m always mindful of the balance. I’ll put things in, then I’ll strip them away.

ENMORE AUDIO: I often wonder if it’s more of an effort not to dive in and cram every bit of space with sound…

KELLY LEE OWENS: It is hard to get across good ideas with simplicity. So I’m always trying my hardest to do that and get the idea to a place that’s honouring what needs to come through, but without taking up too much space, so the mind doesn’t have a chance to explore itself. It sounds super spiritual, but I guess it is for me.

ENMORE AUDIO: Is there anything outside of music that’s guiding that? Is there any inspiration from other mediums? Architecture and design often play with the idea of constructed space.

KELLY LEE OWENS: In a sense, nature. Coming from Wales, I’m used to having a big skyline and openness. And we all know that being by the sea and just having the horizon to look at is a meditative experience. We’ve filled up all of our skies and cities, everything’s getting taller and bigger — it’s too much for our minds to take in.

I’ve lived in London for eleven years, so there’s obviously something about it which I love, but I do love to come away from that often. I grew up in a place with big hills and mountains and that’s my inspiration. No matter what the question is, nature is always the answer. We just have to take the time to remember that.

ENMORE AUDIO: There’s a blend of the ethereal and the intimate on your vocal treatments throughout Inner Song, especially on the single On. What’s your approach to tracking and mixing vocals?

KELLY LEE OWENS: Initially, I record all the vocal ideas in my house. So once the music is written, I take those basic arrangements and build from that. I really enjoy sitting in my bedroom — just me, Logic and a good mic and just tracking ideas. Again, adding stuff and taking stuff away.

On my first album, I just put reverb and Space Echo on everything, but this time, I went for a more layered approach. The messaging needed to be right up there, so I was going for clarity. I allowed myself to really go in with the harmonies.

With On, for example, I’d written the chords and on top of that, I was writing the lyrics and vocal melody. This really high top line came in and I thought, ok, this sounds slightly operatic, but let’s just go with it. So my approach with vocals on the record was basically to be unafraid.

ENMORE AUDIO: Natural samples play an important role in the record too. Are there significant examples that you can point to?

KELLY LEE OWENS: Melt is the most obvious one. I wanted a techno banger in there, as I always do, to switch up the energy of the album. I wanted to speak on climate change, but perhaps not in the most obvious way — and I feel like sound has such potency. So I thought what better way than to take the sounds of nature, which led me to think, melting glacial ice would be pretty good.

Of course, I didn’t go to the arctic and do it — that would be the most ironic, ridiculous way to do it. So it was classic free sample sites. I usually don’t do that because I love going out with my phone and the Shure MV88 microphone. Another one was people skating on thin ice, which was a metaphor for where we are as a species. This [climate emergency] is continually taking place — as I’m talking to you, this is happening.

In On there’s a sample of a train. It’s quite hard to hear unless you break it down, but it sounded like a hi-hat to me (mimics hi-hat rhythm). I was holding my phone out the train window capturing the sound. This is me all the time, holding my phone out everywhere I go.

ENMORE AUDIO: And the fact that they’re not that obvious makes it all the more intriguing. You have to dig deep into the sounds to uncover the story of the album.

KELLY LEE OWENS: Totally. And slightly shitty recordings on your phone can add to the ambience and the humanness. I’m always conscious of trying to balance the humanness with the machines.

ENMORE AUDIO: Speaking of that balance, was it a deliberate effort to combine the grinding kick and bass elements with the icier pads and melodies throughout Inner Song? Or was it a reflection of your state of mind at the time?

KELLY LEE OWENS: Yeah (laughs), when it comes to bass, I’m always being told off. Everything is too much, too bassy and I just don’t care. I used to play bass in a band and I used to play drums, so the rhythm and the bass for me are everything. So it has to sound warm and rounded — that’s really important to me. It’s literally the glue for everything else.

It’s only once I’m happy with this foundation that I go for the higher, more ethereal stuff. Everything needs that balance. That’s just a personal taste thing and I guess, the thread that runs through everything I’ve worked on. Nothing too shiny, a bit of grit: that’s just the experience of human life. On a song like L.I.N.E, it’s a ‘sweet’ sounding song with a dark interior. Everything has something of the opposite in it.

ENMORE AUDIO: The approach to rhythm throughout the record is particularly fascinating — with its overlapping layers and multiple time signatures. Is that born from jamming with sequences?

KELLY LEE OWENS: I think that’s just my mind (laughs). It’s keeping myself interested. I can’t read or write music, so for me, it’s all about the experience, what I’m feeling and intuition. Drums are the most intuitive thing ever.

I did an African drumming composition when I was in high school with like, fifty djembes. Everyone else was doing little acoustic guitar covers. I don’t know, it’s just something in me. Rhythm is everything. You can do lots of things to keep people’s attention, but ultimately, it’s about keeping my own attention.

Half of it, especially in the early stages is not knowing what the fuck you’re doing. I don’t give a shit what’s right, technically. Jon [Hopkins], he’s anti-training and there’s a reason for that. He was trained classically on the piano, but it’s so limiting. You’re taught to colour within the lines and to me, that’s so boring.

Even though I’m super meticulous and I’ll spend hours and hours on details at the end, I know when to stop. I don’t know where that comes from, but some people really struggle with that.

ENMORE AUDIO: With Inner Song in the can, are you already onto the next project?

KELLY LEE OWENS: I’m not actually. I’m doing things that are related, like remixes for other people and I’ve actually been writing music to screen, which is something I’ve always wanted to do and never had time to do. I’ve also been writing string arrangements and I love it.

I know that I won’t have time to do that from next year onwards, so for me, it’s taking this time out to create in a different way. I’m not quite ready to move onto the next phase yet. Some people keep creating. I respect that, but I don’t work that way. The music for this album was made in thirty-five intense days, but now I’m pushing into, once again, unknown territory, which keeps me on my toes. To keep challenging yourself is really important.

Inner Song is out on August 28. Visit her website for all the details.