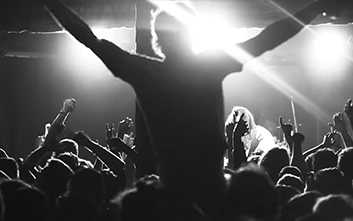 The recipe for a legit music scene is a tough one to crack. Artists, you’ll need plenty of those. Music people; the publishers, producers, bookers – you’ll need them too. A tight scene is made up of only the finest ingredients, but there is one special seasoning oft forgotten: venues.

A good venue is the breeding ground for upcoming acts, and the petri dish where fanbases begin to foster. The best venues can carry an entire city’s music scene on their shoulders. Few venues command the reputation of The Corner Hotel – it’s a repuation built day-by-day with killer gigs over the better part of a century.

The Corner Hotel in Richmond, Melbourne has been the host of some of the best live gigs the country has seen over nearly 80 years. Historical rock performances from legendary stars such as Mick Jagger and David Gilmour hit the venue in it’s developing years, and old timers from the area still tell the tales of rooftop jazz performances until the sun rose…

The modern incarnation of the Corner Hotel began in 1995 when the current licensee Tim Northeast and booker Richard Moffat took the reins. Instead of continuing the history lesson, let’s take a short look at some of the acts that have hit the Corner stage since then:

You have no idea how many bands we would kill to see were left out of that list. 20 years is a big stretch…that’s a lot of good times.

The Corner Hotel seems to command enough respect from musicians and punters alike to constantly pull through on ridiculous international and Aussie acts, and all their big shows sell out, usually across multiple nights.

It’s what a great venue should be – an icon within the industry and a tier for emerging venues and bookers to strive for. Bands want to play there, fans want to see shows there, and other venues wish they were the Corner.

It’s a hotel with a strong past, but don’t dwell on it – yes, some of the Corner’s best gigs ever are those that happened before you were born, but the shows of the future will only continue to grow in propriety. A stage as prolific and musically varied as this one isn’t going anywhere.

So get yourself down to Richmond. With seven-show weeks being a regular occurrence here, there’s a chance you’ll catch a band you love, a genre you haven’t explored, a new best friend, or maybe your next die-hard favorite act.