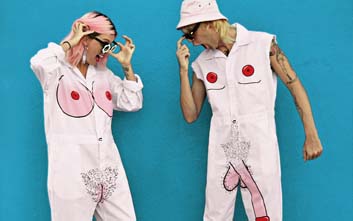 The Gooch Palms have been far from home for a good stint; holing up in Los Angeles, sampling the local cuisine, and hitting American crowds with their rowdy Aussie rock.

But after three weeks, they’re coming back home – and doing it loudly. They’re hitting the Beer & BBQ Fest in Sydney and Adelaide, plus they’re knocking off a huge tour alongside The Bennies.

Not to mention, there’s an album in the oven. We caught up with Leroy and Kat to find out what’s been happening across the pond, plus what we can expect from the newbie. New singles, donut bread and when to keep your junk covered: now that they’re back in home territory, we took five with The Gooch Palms.

HAPPY: Hey guys, how’s it going? What ya been up to lately?

THE GOOCH PALMS: G’Day! It’s going great! We’ve recently moved back to Aus and recorded a new album and will be releasing the first single soon, can’t wait for ya’ll to hear it! And we’ll be starting a run of live shows soon, including the Beer and BBQ fezzie and a bunch of shows with The Bennies!

HAPPY: You’re proud Newcastle natives… how’s the local scene going? Any local Newcastle bands we should keep any eye on?

THE GOOCH PALMS: The local scene is heaving! We try and get out to as many shows as we can. There’s always something on here these days. Def keep an eye out for Fritz, Pals, Raave Tapes and pretty much any band from Newy, they are all great!

HAPPY: You guys recently spent a good chunk of time in LA… how does the city of angels compare to good ol’ Newy?

THE GOOCH PALMS: Yeah we were living in LA for three years and recently came back to do the new album and gear up for some Aussie touring. But both LA and Newy are great in different ways. Newy is closer to the beach than where we were living in LA. We were in Silverlake, which is awesome, but an hour and a half from the beach. We’d make the trek pretty often though. Now we’re living in what is considered a non-beachy suburb of Newcastle and we can still be in the water within 10 minutes of leaving our house. So that is pretty sweet.

But LA is a really great place to live. We’d move back in a heartbeat. We found it really welcoming and open minded and we felt at home straight away. We had so much fun over there. It was hilarious teaching our American friends our Australian ways! It’s interesting being a foreigner for sure. But we love being back in Australia and are enjoying being understood when we talk on the phone or order food (American’s really struggle with the accent) and experiencing weather again is nice. LA is pretty much 27 degrees every day year round and it never rains. It sounds like heaven but it makes you miss rain!!! Rain washes away puke on the footpath. I DON’T WANNA SEE THAT EVERY DAY FOR THREE YEARS!!!

Also their bread tastes like donuts. Even the brown grainy bread. Even smeared heavily with imported Vegemite. It’s no good!!! But despite the donut bread and dried up puke patches and various millions of other problems the US in general have (especially right now, Trump we’re looking at you) the best thing about LA is no one ages. You can be a kid forever. Not like the harsh reality of Newcastle!!! You’re old here at 23! We wanna be young even when we’re 80!

HAPPY: You played a fair few live shows while over there… how did they react to your onstage nudity?

THE GOOCH PALMS: We didn’t do the nudity thing. We haven’t been doing it for a while really. In some states they are super strict on that kind of thing and you could end up in serious trouble. We need to stay on the right side of the law if we want to be able to travel the world, which we want to do until we drop dead so we’ve been behaving!

But Americans are a bit more conservative so they might not have been that into it anyway. Europeans on the other hand!!!!

HAPPY: Have you played to any audiences (anywhere in the world) recently that haven’t responded well to your live shows?

THE GOOCH PALMS: Na not really. We seem to get a similar type of crowd all over the world. All walks of life! Our crowds are always diverse so even if some people aren’t 100% into it, there are always more who are. Europe is a funny place, even when the audience look like they are not going to like it, purely based on what they look like (for example, the kind of posh middle-aged crowd we played to in a small Italian town) they still really get into it! The owner of that Italian venue asked why we didn’t get naked and said her and all her friends were hoping to see some Aussie peen! Lol, don’t remember her exact words but “Aussie peen” was the general gist.

HAPPY: You recently got announced for the Sydney Beer & BBQ Festival… are you keen to play a festival with so many good brews on tap?

HAPPY: If there’s one beer you could have an endless supply of for the rest of your life, what would it be and why?

HAPPY: It’s been a little while since we’ve heard any new music… how much longer are you gonna make us all wait?

THE GOOCH PALMS: The new single will be dropping like a hot little potato next month!

HAPPY: Any other exciting things we should keep an eye out for?

THE GOOCH PALMS: We’re currently making a lyric video for the single and we’ll be filming a music video as well so they will be released next month too. Got some shows coming up as main support for The Bennies, those shows will be wild!!! And plenty more singles, music videos, shows and then finally a new album in the not too distant future! Then world tours and more Aussie shows! It’s going to be a busy couple of years ahead for us! Say goodbye to the Cambridge Hotel as another staple venue closes