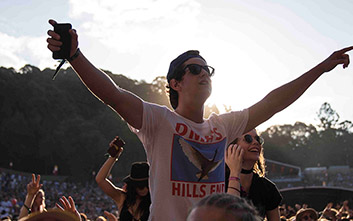 We sent our writer Georgia Love into the depths of Splendour In The Grass 2016 so we could live vicariously through her while the rest of us stuck it out in the cold, dark office. Here’s what she reported back to us, highs, lows, lacy black g-bangers and all.

The festival becomes it’s own little world and the punters totally forget about reality. Here are a few hits and misses about the tunes, fashion and other happenings of SITG2016.

Firstly, no gumboots were needed to be worn and were properly reserved for shoeys, or the more appropriate title ‘gummies’. We are happy to announce that North Byron Parklands were dusty enough to keep punters snot black for the next month.

When its comes down to the acts, you can never really lose. Even though The Cure didn’t play Love Cats or the killer trumpet solo in Close To Me, they still played Friday I’m In Love early enough in their set so all the basic bitches had time to scurry off to be swooned by Matt Corby.

Methyl Ethel absolutely smashed it with punters spilling out the sides of one of the tents at a 1:30 pm time slot. Sampa The Great was a bad bitch and had the Mix-Up stage grooving in the early hours of 12:30 pm.

Local gal Montaigne displayed herself as a born entertainer. She danced around the stage pulling weird but entirely appropriate facial expressions to suit her gorgeously unique singing style.

King Gizzard and the Lizard Wizard should be formally knighted as the spirit animals of the festival. Band of Horses once again inspired a few tears with The Funeral.

And finally, one that came out of the woodwork – Leon Bridges. His Motown-inspired blues tunes were filling the GW McLennan tent at dusk on Friday night and it set Splendour off perfectly.

Minding the fact that some artists that absolutely killed it, there were some that just did not. For example, home-grown heroes Sticky Fingers were less than impressive. Diz forgot lyrics and tried to make them up on the spot; He was coming in bars early during their tune Just For You.

The band tried to fix this, but Diz was another planet. The sound was also way down (which is probably not their fault) but really, the whole show was less than tight. But at least there was a confetti cannon. That was cool.

Another hit of SITG 2016 was the glitter trend. Shifting from last year, the metallic tatts were out, and glitter was in. Most people got into it too. There would’ve not been a single soul in that entire festival that didn’t have glitter on them somewhere – it’s sneaky stuff. It’s hard to escape, so the best option was to embrace it.

Fashion was totally taken to the next level this year too. Some boys rocked the classic man-kini. Good on them. Some decided that wearing overalls and no shirt was just bizarre enough to display their inner farm-boy in a stylish (?) way.

Girls on the other hand just got their boho chic on and looked fab. Others may have debatably taken it a bit too far though. For example, the naked body paint and g-string girl. Seriously, nothing but leopard print body paint and a lacy black g-banger. Kudos for the courage and she was probably feeling fresh-as-a-daisy the whole day.

But I did read an article once saying that wearing clothes is a sign of human intelligence…so I’ll just let that set in. The final verdict is that Splendour was simply too short. Reality bites and we are super keen for next year and it needs to come quickly, please.