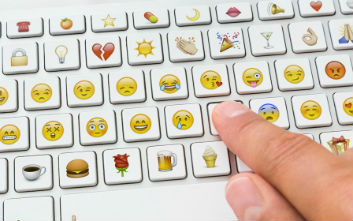 Today we will dive deep into the legend of the crying-laughing, eggplant-peach and red-dress-tango-lady Emojis. O.M.G.

Unicode Consortium is made up of mostly volunteers from tech firms, and votes on which new Emojis should be released each year. Co-founder and president of Unicode Consortium, Mark Davis aka “Shadowy Emoji Overlord”, is the man to be thanked for gifting us with a visual language that adds a little sparkle to the mundane text.

“Think of Gringotts with the goblins working underground. [The Consortium is] like that” Mark Davis says.

The non-profit does a whole lot more than formulating tiny surfer figures. Unicode, on a foundational level, allow computers to transform numeric codes into letters and symbols we can all understand.

So what is the Emoji origin story? They were formed in Japan in 2000, and then picked up by the iPhone in 2010. Now the cartoonish symbols are dominating the media-sphere.

Davis reveals that the face-palm emoji is definitely his favourite, especially in conversations about Trump’s escapades. Have you ever wandered how an emoji is…born? Davis reveals that an emoji worthy of inclusion is one that is highly distinctive and guaranteed popularity.

However, Unicode have some ground rules. Strictly no Justin Bieber, deity or dead people emojis. As an encoded symbol lasts forever, the committee wants to know they’re making the right choice.

This year, Unicode granted many wishes for gender and race diverse Emojis. Now the team have allowed anyone to submit emoji ideas through their website.

But you have got to take the process seriously; Davis has asked no more pitches for a “drunken chipmunk” face.

There has been hype about a potential ‘climate change’ emoji. How you’re supposed to convey a highly complicated world crisis into a few pixels is beyond me, but they’re called Tech Experts for a reason.