After their single Death To The Lads absolutely blew up, we had a chat with the one and only Wil Wagner of The Smith Street Band up at the legendary Festival of the Sun.

Amongst the rays we chatted about everything from shooting a video with your mum, the band’s new record label Pool House Records and what 2017 has in store for the Melbourne four piece.

After Death To The Lads soared to success you’d think The Smith Street Band would have a break, but they have a dozen surprises in store yet.

HAPPY: Your last single Death To The Lads, where did the inspiration come from?

WIL: I wrote it when we were driving through America, we tour America so we drive through the whole country and get to see New York and Chicago and so many great cities, and we also drive through the South, which is very impoverished and dilapidated. The song is about seeing all that stuff, and realising that people point this out and complain about it on Facebook but no one will actually do anything about the problems you see in the world.

I feel like that point had been proved by BREXIT and Donald Trump. People talk a lot of game and don’t do a fucking thing, so the song is about how we’ve all got to grow up a little bit and stop complaining about shit on the internet and actually make things happen by speaking up.

HAPPY: Do you see that as a big problem at the moment, people whinging about things but doing nothing to solve the problem?

WIL: Yeah, especially in music, it’s like a calling card. You’re not a cool band until you’ve had an incident and written eight open letters about it on Facebook, but never actually chased anything up. I get very frustrated by that, and I feel like now there’s all these weird judgements and divides going on in music. If all that ever happened was that people were nice and spoke to each other and respected each other’s opinions, everything would be a lot nicer and easier. Music scenes can be tough. 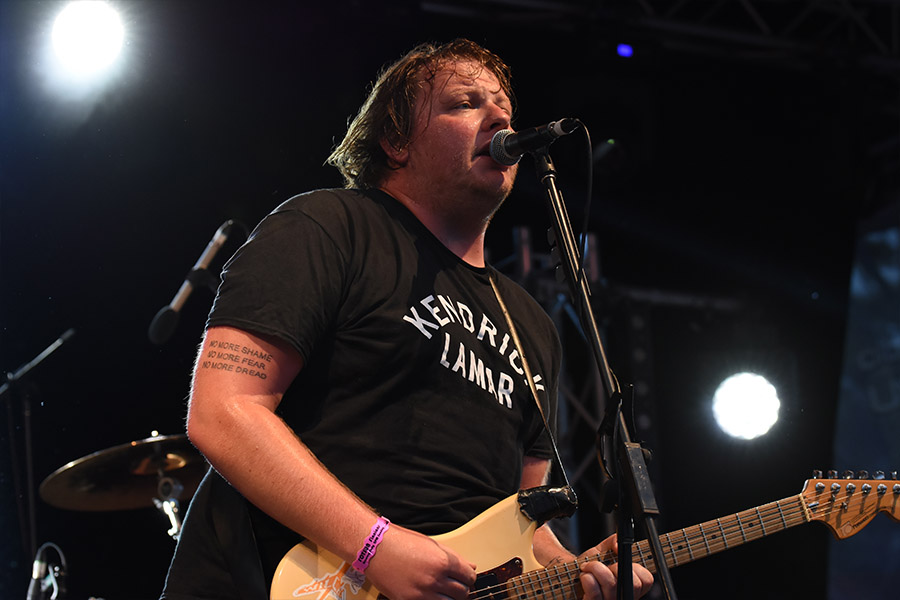 WIL: We’ve had crowd issues, but so has everyone. But I mean, we’ve played a lot of shows, and we might have had around 20 incidents, so that’s pretty good. I’ll take those odds. We’ve had lots of different bad things that have happened sure, but I’ve never really had any incident happen were I haven’t been rational with the person and spoken with them afterwards, people will apologise and they will be embarrassed.

People make mistakes, and if you’re going to tell them that they’re the worst person ever because of that mistake then that just creates a divide, but if you say “hey you fucked up, but I don’t think you’re a piece of shit for doing that”, then you’ve won someone over rather than making an enemy and making yourself also look like a dick.

HAPPY: Back to Death To The Lads, you had your mums in the video, how was that?

WIL: We actually did that because we were overseas when the video was being shot, so it was shot at our favourite pub, and it was all of our friends and family there for the video and we weren’t. I was getting sent photos of my mum and my best friend and his parents all hanging out and I was just thinking “fuck I want to be there!”. But they loved it, we’re already talked about doing all our film clips with them. Any awards we get nominated for I want out mums to go and accept them instead if us. They loved it. HAPPY: Whose idea was the video?

WIL: Fitzy our bass player. We were talking about having a surrogate band do the clip, like another band or something, and then Fitzy just suggested getting our mums to do it, and immediately we all thought it was fucking genius. Our mums were all stoked, they had such a fun time doing it.

HAPPY: I read in an interview that you did with triple J that your mum had her very first ‘bangover’.

WIL: Yeah, mum had a sore neck for a bit after it. But she said that she would be doing something asking “is this right?” and people would be like “nah he’s way sweatier than that and he goes back and forward heaps more”. Mum was getting stage directions from everyone. All of our mums studied each of our rock moves.

Fitzy our bass player does the ‘Fitzy Swoop’ where he gets really low then comes back up, and there was a GIF we were all sharing around of his Mum doing the perfect Fitzy swoop that she had practiced so much. The whole thing was the fucking best.

HAPPY: Do your parents go to many of your shows?

WIL: My parents come to everything. I think my Mum had a thirteen-person strong guest list at our last Melbourne show. And if we’re doing two, three or four nights in a row then Mum will come to all of them. Mum spent $150 on merch the other day, they’re the best and the most supportive people ever. We had to tell the people selling merch at our shows not to sell merch to her, but then she got her friend to go and buy merch for her. They really are the best.

HAPPY: That’s so cool. So many people are like “yeah my parents aren’t really into my music.”

WIL: I mean, we’re all so fucking lucky to have parents like that. Both of my parents are authors as well, so when I started doing this they were like “we get it”. They weren’t concerned about uni or real life, they were like “ok you want to do that, it’s fucking hard but you’ve got to go for it”. I think so many people aren’t this lucky. I mean if I had kids I wouldn’t want them to do this, I understand that.

HAPPY: You guys have an album coming out don’t you?

WIL: Yeah, we actually only just finished masters of it, so we’ve been listening to it heaps. I really like it too, which is not normal for me when we make a record. I write all the songs, so by the time they are recorded it has been a year since I’ve written them, so I’m just so embarrassed by everything I’m saying. But this record I feel really good about. We worked so fucking hard on it, we went and recorded it overseas and spent a bit more money on it than we normally would.

We actually wanted it to sound like a quality record this time around, not in terms of the songs but in terms of the production. We worked harder on it than we’ve ever worked on anything. And halfway through it we left our record label and started our own label that we’re going to release it on. We really believe in this album and can’t wait to show it to people.

HAPPY: When can we expect it to be released?

WIL: We’ll have another single out hopefully in January, then the record will be out around March or April. So not too far away. We’re getting all the final art done, it’s all coming together. It’s so exciting. This is my favourite part about being in a band.

HAPPY: I wanted to ask you about the record label too. It’s only a relatively new creation isn’t it?

WIL: Yeah, we’re our own first signing. We actually just made our second signing but that’s unannounced at the moment. We were with Poison City Records in Australia for a very long time, but we’ve also been very independent and like to do things for ourselves. I guess we’ve been touring a lot for the past five years, and it’s really hard in between tours to feel useful, because none of us have jobs, we’re away for eight or nine months of the year. So you come home for three or four weeks and you’re so excited to be home, then after like three days it’s like “who am I, what’s my purpose if I’m not on a stage”.

We wanted to start the label because we’ll probably start to slow down a little bit over the next five years and we’re all getting a bit older so we want to have a life outside of just touring. Not that we’re going to quit the band or anything, but this is not a thing you can do forever. It’s something we’re going to try and grow and grow, but I’m so excited about it. It’s called Pool House Records. We’re doing it with Remote Control Records, so it’s very similar to Courtney Barnett’s label Milk! and King Gizzard’s label Flightless.

I’m just so excited about it all. I’ve got a shirt made up with the label logo on it and I’ve got my official label email now. It’s all the little things that are making it really exciting.

HAPPY: Aside from the album coming out and Pool House Records, do you have anything else planned for 2017?

WIL: Yes. I’m going on a solo tour at the beginning of the year which I’ll be bringing a few friends along for, and then Smith Street are going to tour for basically the whole year. I think we’ve got two European tours, one American tour and an Australian tour booked so far, so that will take us out to the end of the year, then for the start of 2018 we’ve already started planning something that will be the biggest and best thing we’ve ever done.

I don’t think anyone will expect it to be what it is, but we’re not going to announce that for another six months. But remember that I said we are doing a really crazy thing that no one has done before, and we might try and do a tour that might kill us as people and as a band.