Whilst some Game of Thrones sex scenes may be uncomfortable and inappropriate, many are steamy, memorable, and unflinchingly stimulating.

When the sex wasn’t cringe-inducing, it was usually an excellent way to break up all that gratuitous violence that circled Westeros. We’re only going to be including the sauciest, most memorable scenes, devoid of moral ambiguity. Just the hottest of characters in consent, going at it hammer and tongs. Here is our ranking of the 10 best Game of Thrones sex scenes – and why. 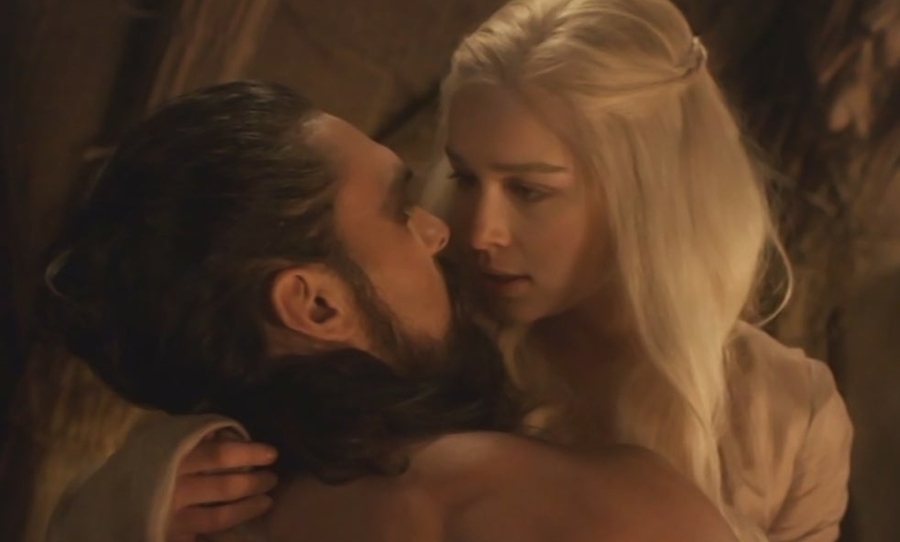 Perhaps a controversial choice due to the fact that Bran’s voiceover reminds the audience that Daenerys is indeed Jon’s aunt. Awkard? Absolutely. However, we still have to give this a spot, as this sex scene was the most highly anticipated of them all, with audiences all over desperately waiting to see Kit Harrington and Emilia Clark in the same bed. Well, you got what you wanted. But at what cost? Moving swiftly on.

So I can’t sleep so I decided to watch game of thrones season 7 episode 7 at midnight then I re-watch Aegon Targaryen a.k.a Jon Snow having sex with Daenerys Targaryen and I was like uhm she’s your aunt for God’s sake! But the funny part is that Brain is just watching.

Now here’s a surprisingly cute, wholesome sex scene. Sam isn’t exactly known for his looks; however, he has a heart of gold and manages to win the precious Gilly over. Via the ‘tending to your sexual interest’s wounds’ trope, Gilly lets Sam know that he’s a little more than a friend with a kiss, and things escalate from there. During the heat of the act, Sam let’s out a hilarious “Oh my!” – earning them a spot on this list.

The passion these two have for each other is almost unparalleled throughout the show’s eight seasons. Robb discards previous commitments (and his dignity) when his eyes fall upon Talisa in Season 2, and his love for her never appears to wither.

In this particular scene, Talisa reveals she is pregnant, and Robb shoots her a look of utter adoration straight out of a fairytale. They both excitedly proceed to get it on, but with their chemistry, you can’t blame them. “You are my queen” is also probably the smoothest line in the entire show.

– king in the north
– cute and badass
– truly loved talisa
– why did he die tf
– bring him back pic.twitter.com/R6ZvmRGtwB

Daenerys took a painful amount of time to get over previous husband Khal Drogo, but once she does, she finds herself a handsome hookup. Being the queen that she is, Daenerys playfully commands Daario to strip in front of her, and Daario happily obliges – because let’s be honest, if Emilia Clarke pours herself a glass of wine, slowly sits on her bed, makes severe eye contact, and tells you to “take off your clothes”…you do exactly that.

Game of Thrones gets the green tick for sexual inclusiveness, with Loras and Renly giving gay male viewers a raunchy scene to enjoy. The semi-secretive couple sadly stops short of going all the way due to some plot complications we won’t waste your time with. However, audiences are still treated to kissing, undressing, and some hand-on-arse-action, all from a canopy bed that has certainly hosted many steamy nights like this one.

The Lannister gents are no strangers to sex, but no one stole the heart of Tyrian quite like Shae (before the horrific betrayal, that is). In their more promiscuous age, Tyrian and Shae excelled in sweet adoration: “I am yours, and you are mine”. Bless you, Tyrion.

Game of Thrones sex scenes rarely get more beautiful than this. After four seasons of heated stares, Missandei comes into Grey Worm’s room the night before he gets shipped off for battle for a night to remember. Grey Worm is castrated, but that doesn’t stop the two gorgeous lookers from getting intimate with each other – proving that genitalia isn’t essential for sexual pleasure.

Fans are also treated to some vulnerable confessions that reveal how much these two really trust each other. “You are my weakness” got more than a few fans in the feels.

Grey Worm basically just told Missandae that getting the chance meet her was worth getting castrated…. and if that ain’t love I don’t even know

Daenerys arguably has the largest character arc of anyone in the TV show, but this is where it started. In the previous episode, Daenerys was forcefully subjected to sex with Khal Drogo, but this time, Daenerys asserts her dominance – beginning her journey to becoming a high-status badass. She takes charge in the bedroom, putting her husband on the bottom, making for a fiery sex scene that ultimately serves as a rewarding shift in power.

The Battle of Winterfell had finally ended. There was wine, there was celebrating, but most importantly, a hookup that even die-hard Jamienne fans were beginning to give up on. This adored pairing had been in the making for quite some time. Over six seasons, Jaime and Brienne became close, at the same time growing respect for each other, and participating in, for lack of a better term, eye-fucking.

Their lovemaking felt like the start of a fresh chapter for Jaime, but in classic Game of Thrones fashion, things aren’t cheery for long. In the same episode, Jaime departs from Brienne in favour of his sister Cersei, telling the knight “She’s hateful, and so am I”. It makes their only sexual encounter a brutal glimpse into what could have been.

Me during this Jamie and Brienne scene #GameOfThrones #DemThrones pic.twitter.com/hrJ6rUVGNF

Man, the showrunners really got the tension and release right on this one. From their initial meeting in Season 2, Jon and Ygritte yielded undeniable sexual chemistry. From spooning together in the snow “for warmth” to Ygritte calling Jon out for his lack of sexual experience (“you know nothing Jon Snow”), it was only a matter of time before these real-life darlings got to it. And get to it they did, in a delightfully scenic cave. The act is romantic, entirely relevant to the plot, and gets an A+ for steaminess, making it our number 1 GOT sex scene. George R.R. Martin is working on the next 'Game of Thrones' novel whilst in isolation