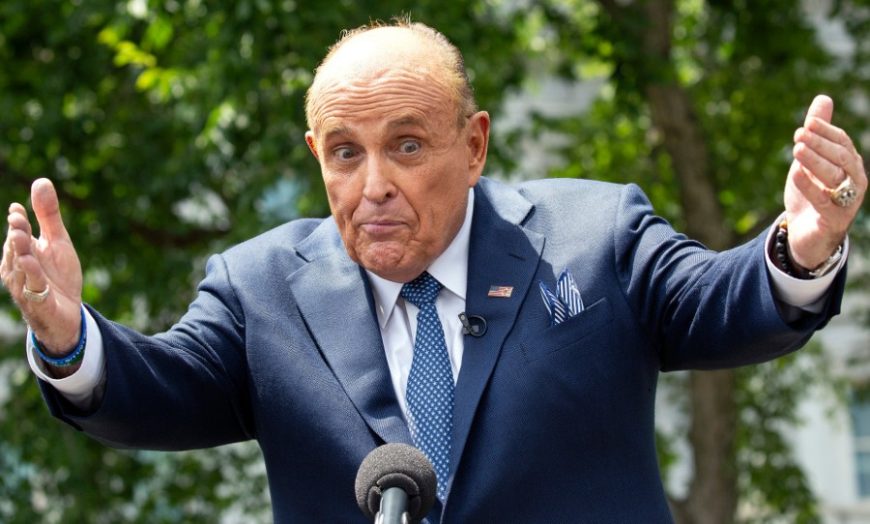 Trump’s personal attorney Rudy Giuliani has been well and truly pranked in the new Borat film, caught on camera in quite the compromising position.

Former New York City mayor Rudy Giuliani has been caught in the act of caressing his junk during a prank for Sacha Baron Cohen’s new Borat film.

Trump’s personal lawyer (imagine having that job) was caught on camera reaching into his trousers while in the presence of actor Maria Bakalova, who was posing as a conservative TV journalist.

The new film is set to be released this Friday and it seems Giuliani will take a significant hit to his reputation, after believing he was about to ‘get lucky’ with the actor – who plays Borat’s daughter in the upcoming film – in a hotel suite filled with hidden cameras.

ABC’s News Breakfast show released a screenshot of the scene, and yep, the former mayor is indeed compromised.

Soon after, Cohen burst into the room, dressed in true-Borat fashion in a bright pink mankini, proclaiming: “She’s 15, she’s too old for you!”

Apparently, the whole ordeal involves Giuliani telling Bakalova that the COVID-19 virus was “manufactured” in China for them to deliberately spread around the world. Sounds about right coming from someone so closely associated with Trump.

The prank falls inline with Giuliani’s interview with the New York Post back in July when the former mayor called the police to report the incident.

“After she removes his microphone, Giuliani, 76, can be seen lying back on the bed, fiddling with his untucked shirt and reaching into his trousers. They are then interrupted by Borat who runs in and says: “She’s 15. She’s too old for you.””

Did you mean placid with an F? https://t.co/voRiGz0HMR

He told the New York Post, “This guy comes running in, wearing a crazy, what I would say was a pink transgender outfit. It was a pink bikini, with lace, underneath a translucent mesh top, it looked absurd. He had the bear, bare legs and wasn’t what I call distractingly attractive.

“This person comes in yelling and screaming, and I thought this must be a scam or a shakedown, so I reported it to the police. He then ran away,” he continued.

“I only later realised it must have been Sacha Baron Cohen. I thought about all the people he previously fooled and I felt good about myself he didn’t get me.”

So Borat could compromise Rudy Guilliani but Russian Intelligence couldn’t. Got it!🙄🤦‍♂️😂🇺🇸 pic.twitter.com/0NwFbOSbzh

Well, Giuliani, it seems you have been got.

Borat Subsequent Moviefilm is set for release this Friday, October 23.