Introducing RUNK. The latest export outta South West Victoria, these guys might come from where it’s bloody cold but you can bet your last dollar that their music is hot.

It’s hardly conventional, but somehow RUNK. manage to throw normalcy to the wind and just get down to what feels right, and we have to say we’re into it. We took five with these lads to get the low down on RUNK. and that killer rap/rock combo. 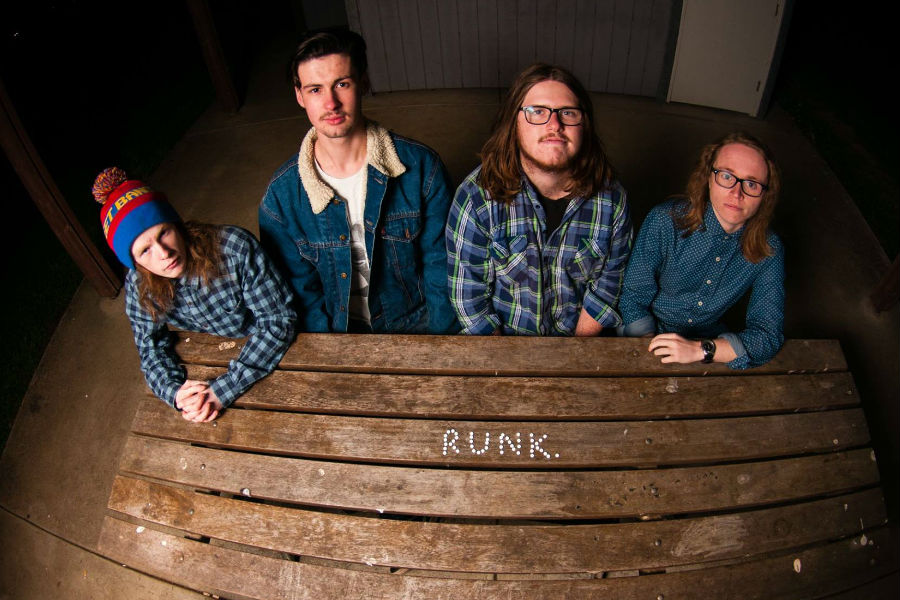 Bringing in influence from just about everywhere, there’s gotta be something for everyone in the far-reaching, genre-twisting tunes of RUNK.

While RUNK. aptly describe their dream combo as “Dexies, K Mart and Auntie Tracy’s cookies”, there had to be more to the story yet…

“I’d say we all listen to a wide range of different stuff, but we definitely have our foundations in certain genres.I  bring the hip hop/storytelling element, Bruckas brings the funk/rock influence, Chemo has the reggae grooves and Matt has the angst-y folk/punk thing going on – it’s kind of like all that cooked up into this big arse pot.”

“Vague comparisons aside; as a group, our biggest inspirations would be dudes like The Smith Street Band, Arctic Monkeys, Run The Jewels, Sticky Fingers, Red Hot Chilli Peppers and Kendrick Lamar.”

The last cut from these fellas, a vicious track named Rush Hour (and the namesake of their upcoming tour) certainly has some history to it.

“The song’s concept essentially stems from how I was feeling just after the end of a recent relationship. It’s a reflection on some of the shit that came about that caused it to finish. I’ve written two other joints about that situation, so Rush Hour is kind of the first part of this little trilogy – it’s the nicest take on it.”

“Basically, we were jamming, and Tom showed the boys and I this fire riff he’d been working on, so I started rapping these bars I’d previously written and it just flowed naturally from there. The boys then workshopped the song and set out the structure, and I weaved the melody for this hook I had in mind in there, which Matt ended up singing on the song.”

So you must be wondering, when can I get more? Well hold tight because as talented as these boys are, Jacob is still in Year 12 and we at Happy agree that it’s best to stay in school.

“We are planning to drop something once I finish year 12, which we are in between writing bits of at the moment. We’ve got a bunch of new tracks we haven’t recorded yet but we will be playing them on tour. So come get that exclusive first listen at one of the shows before anybody else.”

“It’s kind of the beginning of a step in a heavier direction for us musically. All of stuff is authentic, based on real life shit and that kind of marries well with the moodier soundscapes the boys have been creating”

But if you are planning on hitting up a RUNK show, be prepared, as the boys insist, “Bring a damn rain coat. It’s a cold world. BURRR!”

Catch RUNK. on their upcoming Rush Hour  tour. Dates below: