If you’re any kind of cluey Happy reader, you may have noticed us fawning over Pitchfork before. The world-class publisher is an endlessly satisfying tastemaker, consistently serving up fresh perspective, tasty new tunes and some of the best reviews on the planet.

Not to mention they throw together a fine festival. While they’re a little far from home for the average Aussie keeno, there’s now a massive bank of professionally recorded sets you can watch online from the world’s biggest artists. Similar to KEXP or Boiler Room, these sets have become a staple for the musically-inclined Youtube binger, and it’s high time we dissected the Pitchfork library. What are the best Pitchfork Music Festival sets ever recorded? We sift through a decade of recordings to pick the 5 absolute greatest.

The adopted love child of Australian psychedelia and all around kook, Mac DeMarco did the opposite of disappoint at 2013’s Pitchfork Festival in Paris. Amongst a monster 17-song set, his band slots in covers of Eric Clapton, Limp Bizkit, Tool, The Police and The Beatles.

Bassist Pierce McGarry jumps in on vocals for the Fab Four cover, offering a dastardly performance of Blackbird that should never have seen the light of day.

Unfortunately Aussie bands don’t often make their way across the pond to perform sets for Pitchfork, so Movement are the only home-grown heroes on this list. A short-lived but utterly unbelievable set of lads from Sydney debuted in May 2013 with single Feel Real a.k.a. sex transposed into sound waves.

The fact that they performed in Paris the next year for Pitchfork says enough about their promise, but unfortunately for the world they went on hiatus shortly thereafter. At least we have this:

Bastions for wah heavy psychedelia, Unknown Mortal Orchestra are no strangers to our shores or Pitchfork’s. Their 2015 set was a tour-de-force of their entire library, spending equal time on tracks from each of their stellar albums.

A bunch of the most beautiful weirdos on the planet, it’s impossible to take your eyes off Ruban Neilson and the rest of the band throughout the entire hour they perform.

Alongside Movement, Darkside are easily one of the premiere bands in the world who desperately need to get back together. The unbeatable sum of two gargantuan parts, this two-piece represents the union between subterranean producer Nicolas Jaar and god-tier guitarist Dave Harrington.

While Mac DeMarco may have taken the machine gun approach to their set, Darkside chose to stretch a nimble five songs across their 50 minutes. Magnificent at parts and mind-blowing throughout, it’s a performance that no music fan should steer clear of.

One of the many times in you’re life you’ll think 45 minutes isn’t long enough, Whitney’s set from last year’s festival is utter serenity, the band being flawless together and blissful for the duration.

Covering Bob Dylan’s Tonight I’ll Be Staying Here With You just shy of halfway and closing with No Woman, you’ll want this slice of heaven to last forever. 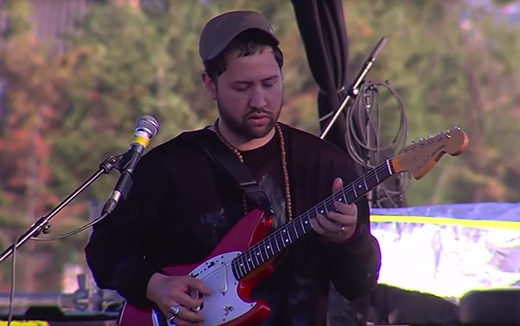 Delving into the mind of Ruban Neilson of Unknown Mortal Orchestra